RSS
← Look and feel
Songs across the Century →

But who’s it from?

There are a couple of postcards, supposedly from Ted, but I am sure they must be from Richard.  It would be good to see them to make sure.

Richard was a careless and brief correspondent, and I can imagine him not signing postcards, Ted was slightly more careful.

The thing is, a postcard from Richard saying he was at the Mont Dore Hospital in Bournemouth would be the equivalent of a text saying “train got in on time, got there safe” now.  He was a doctor, he appears to have been working in Bournemouth for a while.

A postcard from Ted on the other hand saying he was in a Hospital on the South Coast when he should have been in France being shelled, that would have been heart-stopping news for his mother.

So I shall assume these unsigned postcards are from Richard, and add them to the list of things I hope to see when I go to the Imperial War Museum later in the year.

The picture below is from the Bournemouth Echo, and shows WW1 soldiers at the Mont Dore Hospital. 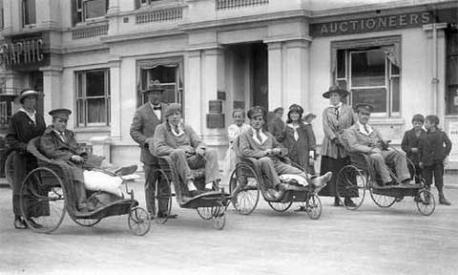 Posted by Family Letters on 4 January, '14 in About

← Look and feel
Songs across the Century →