RSS
About this project: I’ve received the letters →

My grandfather was one of 5 brothers who fought in different theatres of the First World War: Richard was a doctor serving in the Indian Army Medical Corps, Jim served in the Far East and France, Ted was in France and Mesopotamia (Iraq), Paul was in the Navy, and (Chris)Topher was on the Western Front. 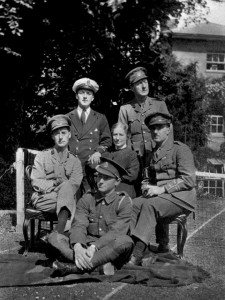 They all wrote home and my mother inherited 650 letters written by Dick,Ted and Paul. In the 1980s she donated them to the Imperial War Museum who typed them up. She then selected some for a book she called Socks, Cigarettes and Shipwrecks because of the disconcerting way the letters veer from the dramatic to the homely and back again. The dramas include first-hand accounts of famous events: Ted witnessed the Christmas Truce, Paul was at Jutland, the shipwrecks were the the SS Persia and the SS Tyndareus.

I want you to experience the letters as my great-grandmother did – spread across four years. This website makes it simple to receive each one by email or read them here exactly 100 years later by getting updates by RSS or Twitter. This is a unique way for our generation to witness the First World War a century on, as the family’s story takes the full four years to unfold.

The site includes the words of the letters, photographs of many of the originals, and family photos and other memorabilia. I must give my grateful thanks to the Imperial War Museum for the transcripts. Many thanks too, to Chris Miller who re-transcribed the letters for me. Without him, this site would not exist. I must also thank the researchers who’ve contacted me since I put up the site with additional information about Jim, Wiggs and Ted.

I’ve become a passionate advocate for the 1.4 million men from pre-partion India who fought for Britain during the First World War, some in tropical kit in the cold winter of 1914/1915 in France, and later on in Egypt and Iraq. Their contribution is rarely acknowledged despite the fact that they were 1 in 6 of the men who fought for Britain. And, for different reasons, their bravery is not often remembered in their homelands. There is more information about those men here.

If you book speakers, I have a one hour talk that includes readings from the letters. Contact me about the talk.

About this project: I’ve received the letters →

10 responses to “About this project”