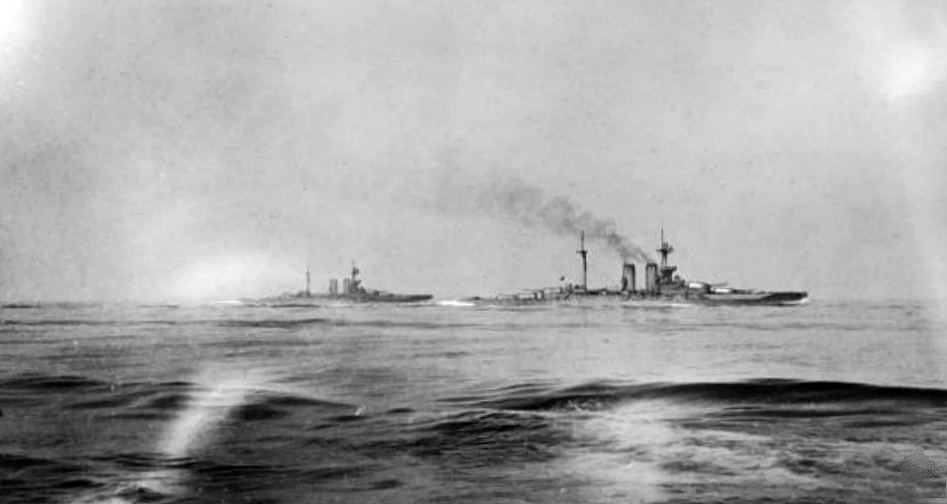 I have been trying to get a letter off to you for ages now- but have never succeeded somehow- but I am going to settle down to it now. It was damned good of you to send me that cable – in fact I was more pleased with that than anything else- really – ‘cos the amount of bluddy boofaced pessimists there were knocking about after our stunt simply made me sick. God! they were awful. You know what the B.P. are & the damn press criticising the various officers an all. What the hell does a bloke fugging in an office know about tactics & things like that – yet they sit down & write a lot of bosh which of course is read by the B.P. I’ll just give you an extract from the Aberdeen Free Press-

Can you imagine anyone writing like that. This fellow as a matter of fact was arrested shortly afterwards- but let off- I should have tortured him.

Daily News. –    Defeat in the Jutland engagement must be admitted——But in face of yesterday’s news the demand for the return of Lord Fisher to effective control of the Navy must again become insistent-

The only paper who really did well was the Morning Post- which I am sending to you- priceless it was- especially the leading articles. S’matter of fact they were hard to buy during the day which is something in the BP’s favour- I am also sending you some other papers- & enclosed is off the back of the Daily Mail. Just like those bluddy Yanks.

About the action. Somehow when we were out units like myself had no idea the Huns were out at all – thought it was an ordinary “strafe” as we call it- we were doing what is known as a “dummy run” on our own Battle Cruisers- you know just training & laying the gun etc- when I suddenly saw them open fire & then splashes falling round them-

Coo! I said – we’re off- and in the next five minutes my turret was firing on the Huns. It put the fear of God into you at first to see these bluddy great shells falling all around- & the light was so bad for us- you could only see them very indistinctly- but still we all blazed away merrily & one could see hits on them now and again- The bluddy awful sight was seeing our ships going up & steaming over the place about 5 mins afterwards- & seeing “nothing”- but after bits of wreckage and a man or two- poor devils –

We were well in the thick of it for about 2 or 2½ hours & giving just as much as we took – and we were at a devil of a disadvantage on account of the light. Then the Hun B.C’s took us into the High Sea Fleet [ie the German Fleet] & then there was trouble- but then shooting got frightfully erratic & they must have wasted 1000’s of rounds – there was a bluddy tornado of splashes all round us.

I should think at least 5 or 6 Huns were concentrating- still we were’nt hit more than 8 times- of course all this time no Jellicoe as yet- until I had it passed through to my turret- “The Grand Fleet [ie the British Fleet] is deploying into action”- God- you can imagine the relief!- The most priceless sight I’ve ever seen- then they opened fire- only for about 20 mins though- & the Huns got cold feet- then firing went to Hell & they turned & off out of it- with the whole of us after ’em.

Then it became mistier and dark- time about 11 p.m- & I never want to go through a night like that again. The most ghastly scene, you can imagine those destroyer attacks- our destroyers on their fleet; but it was so damn hard to tell what was happening- except you could see these frightful flashes & noise going on & then a whole ship go    -.

They were bluddy fine our TBD’s that night- we did’nt fire at all. It is not a thing that is encouraged- i.e. big ship actions at night- the reason being obvious- and next morning we somehow lost touch with them- they had gone in – because they had’nt very far to go- and naturally they know where their minefields are more accurately than we do- so we steamed up and down over the scene of action for about 7 or 8 hours- but nothing more was seen- I dare’nt tell you any details- because I am certain they will all be censored- but I can tell you it’s practically certain that we got 5 of their capital ships- i.e. 3 battleships & 2 B.C’s – at least ½ a dozen light cruisers – & they have’nt many of them either & 20 Destroyers. Then there are several who must be badly damaged – we could see that for ourselves.

The great thing seems to be that the Huns obviously get cold feet when they are fired at- or else they had no ammuunition left- & they don’t seem to have the guts either- And- the opinion seems to be that they could come out again in a hurry- I don’t think they expected anything that time – but they were caught.

Of course I’ve lost heaps of pals – but that’s how they say they all wanted to die- so-! It was a nasty jar about K- [Kitchener, who drowned a few days after the battle when his ship sank off Orkney] & of course there are heaps of rumours about spies etc. but I think that’s impossible- besides it was much too rough for a submarine- even her destroyer escort had to go back on account of the weather. That little fellow Stewart who was in the Gloucester with me was in the Hampshire- he was the navigator.

Comic things happened when the sailors of different ships went on leave after the action. In several places they got boo-ed and at a certain place the soldiers turned their backs on them- in fact there were damn near some riots- and it is supposed to be a fact and I quite believe it- that two men- the pink-faced pessimist type – have been killed by bluejackets ashore – just taken aside & flopped out. When we went on leave on the following Monday- there were boofaces down to about Edinburgh – & then things began to liven up a bit. It’s awfully hard to say whether Balfour was right in publishing what he did so early – but then until Jellicoe had seen everybody – Destroyer Captains etc – he could’nt possibly tell how many had gone- & then the B.P. are always asking for the Truth about our losses- & they were told straight out. The Huns were bluddy marvellous- they had our losses – naming the ships too in their papers on Thursday evening. God knows how they knew – They had the Warspite wrong though.

Well they gave us some leave. I got 4 whole days at home – too damn short really- but I managed to see most people I think, making Jane’s shop & the Club my HQ’s. I went home on the Monday night to dinner & went to town next day till Thursday night. I saw all the 5 super-priceless sisters- & on Thursday night we had the usual family party at a Box – Mr Manhattan this time – 5 sisters- Tim- myself- James- Chubbie & Sheina Nellie – of whom you have doubtless heard. The missing link was Nancy, & no one can make out why she was not there. I lived at the rate of about £2000 a year during that time and Stilwell had to come up to the scratch again- which he did very nobly- but I find it damn hard to save any money you know. I do save some- but then I blow it and more during any leave I get. Naturally I have nothing to show for it – but I would’nt stint myself for the world- taking any of those sisters out anywhere & giving them a good time- & Chubbie & the like. I met heaps of pals too- survivors from various ships- whose yarns are most interesting.

Everyone at home was awfully fit & well- & it was marvellous how they all gathered together from their different jobs. Jane & Chubbie are doing damn well at that shop- & it is a topping little place & a regular rendez-vous for the Wouff Wouffs- It seemed to be packed all the time I was on leave, & they both enjoy themselves thoroughly- going out to dinner & dances an’ all. Jim was very fit too – & very keen to get out to France- he seems to be fed up with this knocking about at home doing nothing – so I should imagine. Mother was as young as ever and working as hard as ever. You might just notice a few more grey hairs – but nothing else. & of “mud” there was none.

I should have liked to have seen Nell but I had’nt a chance. We had a slight F.F some time back – correspondence F.F. and an exchange of photographs. That is a topping one of her- the side face one. She also wrote to me after the stunt too. ‘Corse I had masses of letters- but have managed to square ’em all off now- thank goodness-

A damn good stunt the other day- H.M. suddenly blew up north and came aboard us to inspect the damage an’ all. We being the first ship to which he came – so naturally he was more interested- absolutely informal, no blazing of bugles or anything- just a good look round. ½ our ship’s company were on leave too- so they never saw him. He shook hands with us all & spoke a few kind words- then we yanked him into the Ward Room & he signed the mess photograph- quickly taken out of its frame for the purpose. ‘Corse we are fearfully proud of ourselves- particularly as being the first ship for him to see after the action. We got knocked about a bit you know.

Drew is up here fairly close – and we have been interdining a good deal lately- He asked after you & sent his Chinchins next time I wrote – so here they are. I am having quite a good time where we are now. There are some damn fine tennis courts here presented to the Fleet by Lady Jellicoe’s father- old Cayzer – & I play there most days. One Hillyard of tennis fame- is a Lt-Comdr stationed here & I somehow get mixed up in setts with him- Coo!- but it’s encouraging. Then there are several people whom I have known knocking around – chiefly N.O’s wives- and one gets asked out to dinner etc. What sort of time are you having at Lansdowne- rather dull I should imagine- what are the prospects? I thought I should have seen Topher when I was on leave- but his leave seems to be so inconsistent- he keeps saying different dates. Dreda has got a bumper purse for him when he gets back so he ought to thoroughly enjoy himself.

Well I must go and have a drink after this epistle – cheerioh cockie and damn good luck to you.

The original of this letter is in the Archive of the Imperial War Museum: Private Papers of Captain P F P Berryman RN http://www.iwm.org.uk/collections/item/object/1030020614

This was written three weeks after the battle, but it describes it so vividly that I am publishing it early.

The relaxed tone and open emotion in this letter Paul wrote to his soldier brother shows how much he self-censors in his other surviving letters to his mother. In a later letter he comments that the report into the battle had not been published and therefore he could not tell Ted as much as he wanted to. This letter is interesting because of his descriptions of the maneuvers and of the battle at night. It also provides strong descriptions of the unpopularity of the Navy after the battle. More detailed descriptions of the Malaya’s action are listed below.