No serious effort appears to have been made to prepare the girls for careers though they all went to boarding school. They were young women in their twenties and early thirties by the start of the war. (These photos came from Nell Fielding’s albums. She got engaged to Ted in October 1915).

Benedicta was the eldest girl but she was always referred to as Ben. She was 30 at the start of WW1.

In November 1913 she went out to India for what was intended to be a year long visit, staying first with Richard who was a doctor in Assam in the far east of the country. By the time war broke out in the summer of 1914, Ben was staying with Ted in the hill station where the 39th Garhwal Rifles were based in Lansdowne.  Here she had made friends with the wives and sisters of the other officers. The war brought her home early, and in January 1915 she got engaged to “Wiggs” whom she had clearly known for some time, certainly before she went out to India. More about Ben.

The next sister was Dreda. She was 28 when war came. Her second name was Mary but her parents could not decide on the first until they were actually setting out to the church for her baptism. Then her father Charles exclaimed “I know what e can call baby: today is St Etheldreda’s day!”. Her siblings called her “Dreda” or “Dryden”,

In the early years of the war she got a job in a bank in Guildford, and so released a man for active service. By 1917 she was out of the bank and working on a farm.

Jane was often known as Jinny. She was 24 at the start of the war. She had auburn hair and was pretty and was something of a favourite with her parents. After school she went on to Bedford Physical Training College. In the early years of the war she organised and sang in concerts for the troops with unflagging energy but she couldn’t settle on a serious job. After a few false starts washing dishes and working in the Post Office, Jane and a girlfriend established themselves in a tobacco shop in the West End of London. Ted was not sure he entirely approved but it rapidly became a rendezvous for officers on leave which suited fun-loving flirtatious Jane down to the ground. 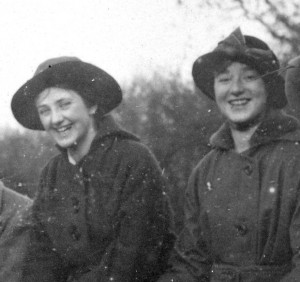 Rosamund was 23 at the start of the war when she seems to have been occupied doing church needlework at an Anglican convent in London.  This was hardly war work, and she found a job on a farm in Kent where she spent the rest of the war and met her future husband.

Ruth was the youngest member of the family. She was 19 when war broke out and would have been a smal child when her big brothers first went overseas. She had already embarked on training as a sick children’s nurse and later she nursed with the Red Cross in Broadstairs in Kent. 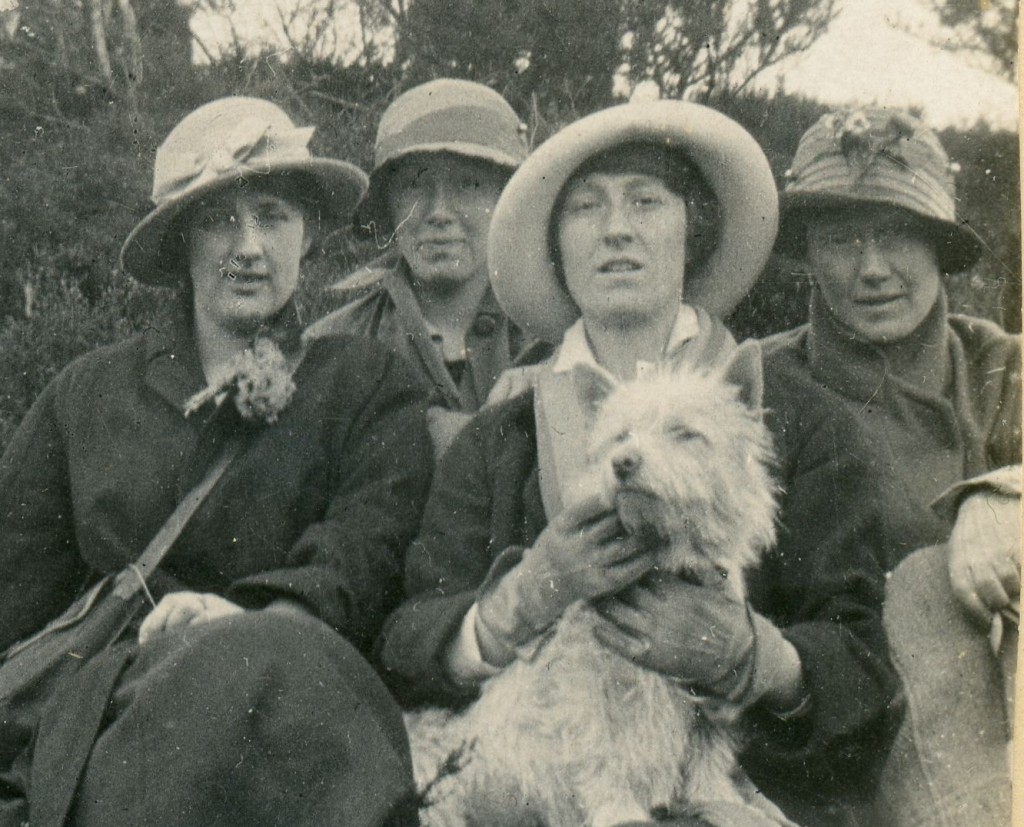 Nell Fielding with Ruth, Dreda and Ben Berryman and Susan the dog, Autumn 1915 or Spring 1916