The primary sources are obviously the letters stored by the Imperial War Museum.

The manuscripts were transcribed in the early 1980s by the Imperial War Museum who let me have copies of the typed transcriptions. These proved impossible to recover using OCR software so they have been re-typed by Chris Miller and I am enormously grateful to him because I could not have done this project without his help.  If you need any proof-reading done or any other work with words, then please contact Chris. We have kept the original spellings, but broken continuous text into paragraphs. 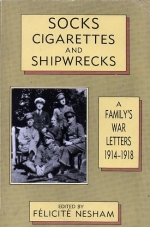 The notes about the original letters, for example that a letter was written in pencil or splashed with mud, all come from my mother’s book Socks, Cigarettes and Shipwrecks. This was an edited version of the letters which was published in 1987 and is now out of print.  I’ve also used it as a source of family information and occasional commentary.

Information about Jim’s military career and Ted’s confidential records were researched by Robert Clark of www.researchingww1.co.uk, and I am very grateful to him for that the information and accompanying commentary.

Additional information about the campaigns that Ted was involved in comes from the official regimental history written by his commanding officer D. H. Drake-Brockman.

I make no apologies for the occasional links to Wikipedia; it provides contextual information perfectly adequately, the links are not likely to break, and it doesn’t take away from the letters’ value as primary sources.

It hurts that the maps are modern rather than contemporary, but so far as I know there isn’t a detailed, zoomable, online map of the world as it was in 1914.