Five brothers went to war: Dick was a doctor, Jim joined up when Kitchener called, Ted was already in the Indian army, Paul was in the Navy and (Chris)Topher came home to volunteer as a tommy.

The Berrymans were a typical Victorian vicarage family: here are Charles and Gertrude Berryman in the Vicarage at Camberley in 1896 with twelve of their thirteen children. (Angela and baby Raymond died as infants, Peter, the boy sitting in the middle at the front, died of meningitis at school). 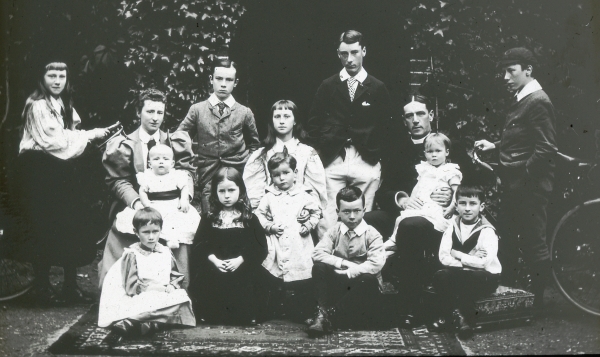 By 1914 the rest were adults ranging in age from Ruth at 19 to Richard at 33; the boys had embarked on careers but the girls were poorly educated (Ben’s spelling is atrocious) and their role in life seemed to be Keeping Useful while waiting for husbands. Relationships between the siblings were strong and they wrote to each other from a very young age and kept up the habit as the boys went out into the world.

The Berrymans were solidly middle class, Charles had died in 1902 (when Ruth was 4 and Richard was 22) and Gertrude lived on income from investments, managing to finish her sons’ education at minor public schools, (though she may have had help with the fees), the house in Guildford was three storeys high and they had at least two women living in as servants according to the 1911 census. 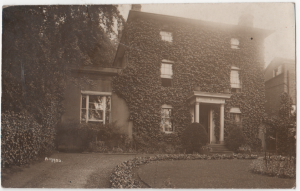 There was a strong Anglican tradition of volunteering and Doing Good Works, but there’s never an expectation that Gertrude or the girls should have to work for a living, though they all do various War Work.

Gertrude and Charles had a large number of friends, the older generation of which kept a kindly eye on the growing family and many of whom are mentioned in the letters, and she often seems to be visiting some or others of them. She also had a few relatives with cryptic names like “Aunt Edward”.

Gertrude was a strong-minded woman; she needed to be to bring up 12 children as a single mother, even as one of independent means. Her sons adored her, her daughters lived with her or close by and may have found her harder to deal with. Gertrude certainly had favourites among her children (Richard was spoilt and could be demanding, Jane’s auburn hair meant she was considered the beauty of the family) and she was not above playing politics among them. Gertrude had a strong will and knew how to impose it: “bully” is a strong word, and she needed to be resilient to raise 12 children alone, but she did sometimes make her children unhappy. Ben was in India in 1913, probably sent there to get her away from a romance with someone Gertrude didn’t approve of, and when Topher (pronounced Toffer) came back from the Argentine in 1914 his first nervous question was “is there any m…m…mud at home?” meaning is there any anger or tension. 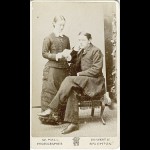 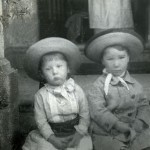 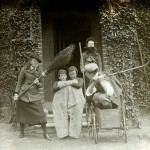 Older Berrymans acting in the 1990s 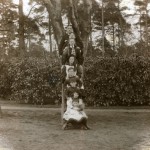 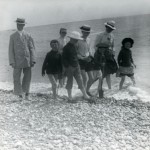 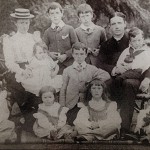 However, she could be defied, and she never caused an actual split with any of her children, in fact she remained close to all of them throughout her life though she could be sharp to their spouses. During the war years she was intensely proud of all of them and devotedly sent them everything they asked for, socks, cigarettes, dress swords (it turns out you couldn’t just post a sword even then, and sending one to India involved a lot of paperwork), Jaegar puttees (only the best for Richard) and even, on one trying occasion, a tent.

Charles and Gertrude were High Anglicans, this is a tradition similar to Roman Catholicism, they were deeply disaproving of “Rome” on one side and of the plainer traditions of the “Low Anglicanism” on the other. Her sons seem to have been more relaxed about their beliefs and rarely mention them, but they go to services when they can and cheefully critique the parson’s churchmanship. However, when Ted writes about singing hymns amidst the sound of shells exploding he says he didn’t know whether to laugh or cry.

The family were all small c (and probably large C) conservatives and active imperialists, never doubting that they aren the British Empire were spreading civilisation across the globe and that the Bosch (as Ted calls the Germans) or the Huns (as Paul does) were utterly beastly and should be wiped off the European map. And there is a paternalistic racism which is awkward to read today, combining respect and pride for the Indian troops with an underlying sense of difference.

The letters sometimes read like parodies of their times, and if there’s a strong sense of Blackadder about them, or of Michael Palin’s ‘Ripping Yarns’, of Kipling’s India or Betjeman’s home counties, or even John Buchan’s Richard Hannay, then it just shows how accurate those people were in observing the character and language of a certain group of Britons on the eve of the First World War.

Read more about Ted, Dick, Paul and their sister Ben(edicta) who wrote most of the letters and Jim and (Chris)Topher who also served. We know much less about the girls (Ethel)Dreda, sometimes called Dryden, Jane or Jinny, Rosamund and Ruth. If you are new to the letters, you may want to catch up with the story so far. 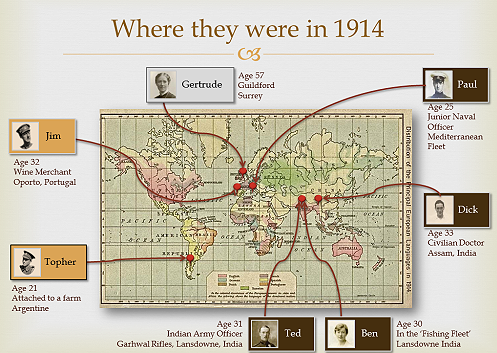 One response to “About the Berrymans”