Putting my mouth where my money is

The Royal Mint’s decision to commemorate the start of WW1 with the portrait of Kitchener from the famous recruitment poster on the £2 coin is clumsy. Surely they knew it would be seen as an even more blatant piece of propaganda now than the posters were a century ago? Yes, it’s a strong image for a small canvas, but it’s hard to accept they did not realise that easy jingoism then looks like even easier jingoism now. 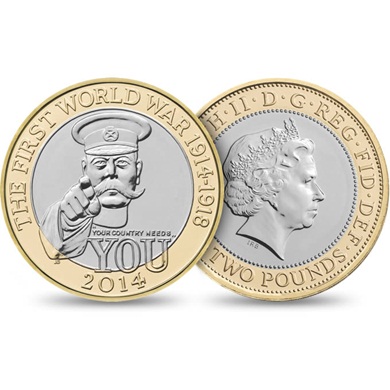 The Mint’s thinking about the First World War seems to be altogether shallow. On it’s website it claims it is

“[embarking] on a five-year commemoration of the emotive wartime journey“.

“Emotive” is a word that looks as if it means something but doesn’t. Sainsbury’s Christmas ads are emotive. So is the verse in birthday cards. It’s not an appropriate word for an event that killed over 16 million people and left a horrific legacy of ruined mental health and dreadful physical injuries among the survivors; or for an event that transformed the economic and political history of the USA and Europe. Such a cheap use of one of the language’s most cheapened words leaves me with little faith in the Royal Mint’s good judgement.

However, I don’t like to say someone’s done a thing badly without trying to do the thing myself, so I have spent some time thinking about how to better commemorate WW1 on coins. Here is a coin for each year of the war and one to sum the whole thing up, and after some thought I’ve come to realise how very little I actually know. So this is a flawed list, but for the little its worth, here it is. My two cents, as it were.

1914 – The Assassination at Sarajevo

I have struggled to think of an image for 1914. The causes of the First World War remain disputed by historians as well as politicians so I keep coming back to the catalyst if not the cause and Arch-Duke Franz Ferdinand and his Duchess Sophia in the motorcade in Sarajevo. 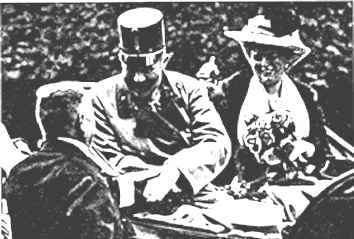 Archduke Franz Ferdinand of Austria and Sophia, Duchess of Hohenberg

However, I cannot get away from the feeling it’s in poor taste to show people who will be dead so shortly afterwards, and I’m not convinced it’s a better choice than Kitchener, it is just less loaded with contradictory symbolism.

Since I began writing this piece, the Canadian Mint have announced their commemorative $1 coin, and I admire it greatly. It shows a couple in a last embrace on a busy station platform before he departs for the Front. I like it that it is not a romantic embrace but an embrace of fear and comfort, it could be a mother being embraced by her son. 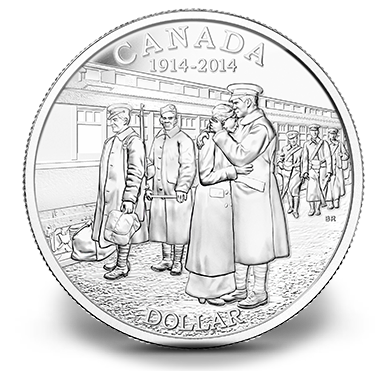 As the Canadians remind us, it is important not to see any war as a wholly masculine affair and when we think of the women who served in WW1, we think mainly of the nurses. I am not the first to suggest Edith Cavell who was executed in 1915, and the petition to ask that she be commemorated with a coin has rmore than 50,000 signatures.

Cavell was a humanitarian before all else. Wikipedia describes her thus:

“She is celebrated for saving the lives of soldiers from both sides without distinction and in helping some 200 Allied soldiers escape from German-occupied Belgium … for which she was arrested. She was subsequently court-martialed, found guilty of treason and sentenced to death. Despite international pressure for mercy, she was shot by a German firing squad.”

Her last words were:

“I realise that patriotism is not enough. I must have no hatred or bitterness towards anyone”

The British saw her as national heroine and the streets were lined with people when her body was repatriated and her funeral finally held in 1919.

For more information see the Edith Cavell website. A relative of one of the 200 men she saved, @Cavell200 is trying to trace descendants of the others.

Someone has even designed Edith Cavell coin, complete with the unsettling and in this context almost subversive phrase “Patriotism is not enough” 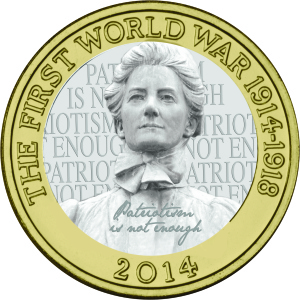 When we think of the First World War, we think of Tommies and of Pals Battalions and we think of France. It’s easy to forget the contribution of troops from the Empire be they black, asian or white and easy to forget the other theatres of war such as the Far East, the Middle East and the Naval battles. As an example it’s almost unknown that the Germans bombarded the city of Madras, now Chennai.

The best known of the Commonwealth troops were the men of the Australian and New Zealand Army Corps, the ANZACs who fought at Gallipoli, and while I personally would prefer to commemorate the black, Indian and asian soldiers, Gallipoli is well-known. It’s also a defeat or a stalemate and we should respectfully commemorate those sacrificed and not jingoistically celebrate victories.

In 1915, Australian and New Zealand soldiers formed part of an Allied expedition that set out to capture the Gallipoli Peninsula… the [strategic] objective was to capture Constantinople … The ANZAC force landed at Gallipoli on 25 April, meeting fierce resistance … [which] quickly [led to] a stalemate… . At the end of 1915, the Allied forces were evacuated after both sides had suffered heavy casualties and endured great hardships. The Allied casualties included 21,255 from the United Kingdom, an estimated 10,000 dead soldiers from France, 8,709 from Australia, 2,721 from New Zealand, and 1,358 from British India.

Whatever the design of the coin, from a practical point of view, Australian soldiers, known as Diggers,are easily identifiable because they wore and still wear slouch hats. Here the 15th Battalion march through Melbourne in 1915. 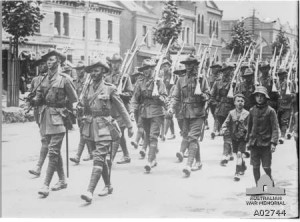 ‘A’ Company, 15th Battalion, marching through Melbourne on 17 December 1914

It would be wrong to commemorate WW1 and not commemorate the Tommy and so for the 1917 coin I suggest Harry Patch, the Last Fighting Tommy, who died in 2009. He and those last few centenarians were a bridge between our time and history.  Harry Patch was born in 1898 in Somerset and was an apprentice plumber who was conscripted aged 18 in 1916 as an ordinary fighting soldier. He was in France for six months in 1917 before being wounded at Passchendaele.

“He had faced the demons of his war; he had talked his war out and had returned to the battlefields on half a dozen occasions; he had even met a German veteran.”

Harry Patch stands not only for those who were there, but for those who came back, many of them wounded as Harry was or suffering shell-shock, the First World War term for post traumatic stress disorder.

I don’t know my way around the war poets as well as I should despite having studied them at school. I am including Owen to stand in for them all, partly because he is one of the best (listen to @historyneedsyou read Owen’s poems Dulce et Decorum Est and  Futility) and partly because he was killed a week before the Armistice. 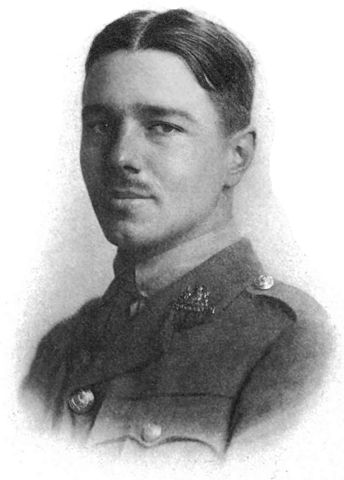 Wilfred Owen – Plate from the Poems

“Wilfred Owen … was born in Oswestry … and brought up in Birkenhead and Shrewsbury. In 1913-1915, [he was] teaching at Bordeaux and Bagnères-de-Bigorre in France. In 1915 Owen enlisted in the British Army. His first experiences of active service … led to shell-shock and his return to Britain. When Owen returned to the Western Front … he took part in the breaking of the Hindenburg Line at Joncourt … for which he was awarded the Military Cross in recognition of his courage and leadership. He was killed on 4 November 1918 during the battle to cross the Sambre-Oise canal at Ors.”  His parents received news of his death on Armistice Day.

So a military hero, a victim of shell-shock and a poet, Owen encapsulates so much of the “lost generation” of junior officers killed during the First World War.

I want a generic image, standing for the whole of the First World War and I cannot think of a better one than an image of massed war graves which has remained with me since I first saw the closing sequence of Oh What a Lovely War. It is as loaded with meaning in its own way as the Kitchener image. There are many stunning images of war cemeteries which have always been laid out and maintained by the Commonwealth War Graves Commision with great thought and respect, and they move everyone who visits them. An image that gives a sense of the scale of the slaughter is important, and George V expressed it clearly when visiting war graves in Flanders in 1922:

I have many times asked myself whether there can be more potent advocates of peace upon earth through the years to come than this massed multitude of silent witnesses to the desolation of war. Photograph by abac077
shared under creative commons – some rights reserved.

My grandfather’s view of Kitchener

Finally, I should say that my grandfather would disagree with me about the Kitchener coin. He came close to hero-worshiping Kitchener and wrote home in 1916:

We have just heard of the tragedy of Kitchener’s death …. It seems to have completely knocked us all over here

… the one bright figure, the one proved patriot gone.

The loss is absolutely irreparable; you know how I admired him; easily the greatest man of his age & the outstanding figure of the war…

My grandfather was clear that without Kitchener’s recruitment campaigns as illustrated in the Mint’s two pound coin, Britain would have lost the European war:

The creator of England’s mighty army that has done and is going to do so much … why couldn’t he live just long enough to see his life’s work … crowned with success?

… time enough to mourn his loss to the full when we have finished the war which we shall be able to do, & thanks to him & to him alone for our ability to do so.

And since this project is about hearing the voices of the dead even when we disagree with what they say, maybe I am wrong, and Kitchener is a good choice. But I find it hard to think so.

Posted by Family Letters on 4 February, '14 in About