The BBC published a hugely popular post recently by Dan Snow @thehistoryguy entitled “10 big myths about World War One debunked“.  Dan Snow then went on to create a few more of his own some of which seem to imply it wasn’t as bad as we think it was.

…  the British army rotated men in and out continuously. Between battles, a unit spent perhaps 10 days a month in the trench system, and of those, rarely more than three days right up on the front line. It was not unusual to be out of the line for a month.

During moments of crisis, such as big offensives, the British could occasionally spend up to seven days on the front line but were far more often rotated out after just a day or two.

I am curious to know what Dan Snow bases this on – the newspapers of the time or on letters, army records and other primary sources?

I am fortunate to have my grandfather’s letters from France in 1914 and 1915 and he wrote home during stints of 20 and 25 days at a stretch in the trenches, with the time between spent “in reserve”.  Ted Berryman was a Captain in the Indian Army and they were in their light tropical kit for the worst part of the winter of 1914, drenched to the skin and shivering in the mud and bombarded with shells.

It is most awfully cold here my dear as you can imagine. And we are still in thin khaki drill;  … I don’t really think I’ve got enough on, but I cant get any more gear at present.

You see we came out to occupy the trenches on 29th Oct, & are still here; that makes 10 days. Not very long under some circs, but devilish long to be in cold damp trenches with only the kit you stand up in! … You see we have’nt a a thing off for the whole tirne, boots, clothes or anything, nor a wash nor anything like that. We are all filthy, black grimy hands & faces, but we are all the same so it does’nt matter.

He then writes about the sorts of newspaper stories that Dan Snow echoes in his piece:

I read a glowing account in the “Standard” a day or two ago of life in the trenches, but it was very misleading. First of all it talked about “spade hewn, straw-spread” trenches; true in a way, but all our digging has to be done at night, as it would be impossible to dig by day, as the enemy’s…. little advanced trenches, in which snipers sit & pick you off if you show a finger, are only about 150 yards; so the digging is’nt very grand, though I must say our men have done wonders, & have made the trenches quite comfy- And there is some straw, but it’s mostly trodden into the mud.

Ted and his troops finally came out of the trenches on the 17th November after 20 days. They were only out of the trenches for about 10 days and then on the 16th December his uniform turns up but he can’t get at it because the depot is too far from the front.

Ted’s second stint in December was even longer and more relentless as his first in October / November.

Since we first arrived here on 29th October we’ve had 35 days in trenches & only about 10 out, out of which were 5 in reserve and so we have only had 5 days’ so called rest, & were busy the whole of that. However it’s all part of the show.

On the 31st December he says:

We came out of those old trenches on the night of the 27th  [December], after doing 25 days & nights there, pretty long time was’nt it. We were glad to be relieved as you may imagine, the men were all absolutely doggo, as they had to work day & night to keep the trenches for from falling in, because the weather was so wet & beastly that the earthy all got sodden & soaked & had to be simply propped up, & our trenches were simply lined with boards & old doors & anything we could get hold of.

So when I read Dan Snow echoing the Standard’s assurances that troops were only in the trenches three days at a time I was furious on behalf of all those cold, wretched, verminous, sick, shot at and shell-shocked men who were in the mud in the dark for weeks on end.

Maybe things were generally better organised by 1915.  In January and February the three-part cycle of serving in the trenches themselves, in reserve and then in the rear is much more as Dan Snow described it.

Ted was on leave early in January. Late in January they were in the trenches for four days, in reserve for six, and then in February they seem to have settled into week long cycles into the trenches then back into reserve, itself no picnic.

On the 27th February Ted tots it up saying:

We are being relieved tomorrow & go back for a short rest. We’ve done 6 weeks in reserve & trenches & have been hard at it more or less ever since I came out from leave, so I think we deserve a bit of a rest don’t you. But I don’t fancy it will be for long.

So Dan Snow is partly right and partly wrong.  I am leaving the last word with Ted though and the picture he drew  for his sister Jane on the 1st of January 1915:

We are out of the trenches now after 25 days on end, & the whole corps is now resting… I’ve got my uniform now & have had a bath – in an old dustbin – but still it was a bath, & I feel so clean & smart, you would’nt know me. Of course I grew a beard in the trenches, & did’nt shave for just a month, but it was’nt exactly a success, & it looked exactly as if I was’nt shaving & not as if I was trying to grow a beard! 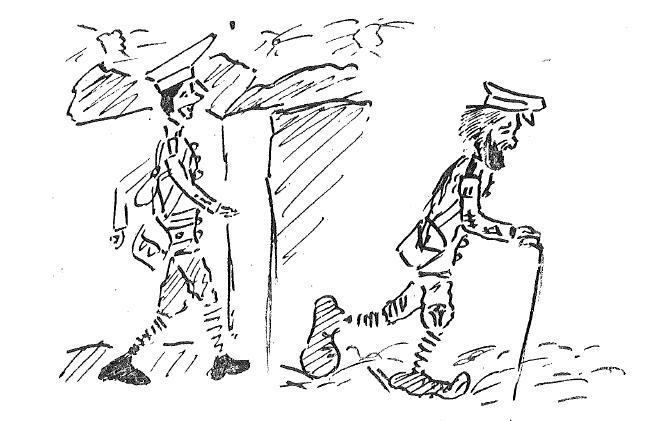 These extracts are from more than 600 letters written by Ted and his brothers to their mother during WW1. Each letter will be published here at www.familyletters.co.uk 100 years after the day on which it was written.

Posted by Family Letters on 20 January, '14 in About, WWI

2 responses to “Response to @thehistoryguy – Mythbusting WW1 with Primary Sources”