Here we are, well on our way to heaven knows where! All sorts of rumours where we are going to land of course, England, Southampton, Marseilles, Boulogne, everywhere in fact one can think of, but no one knows at all, it’s being kept an absolute secret. My last letter was from Karachi I think, when I told you I had met Ben, & she wrote and told you I expect, & you must have got those letters by now. We had awful fun there, she & I, as we were in dock for about 4 days before we sailed. I used to be fairly busy all day on the ship, but always managed to get off in the evening & go up & have dinner on the Dilwara & sit & talk to Ben till far into the night. Well, one day we got orders to leave the wharf, & next day, the 21st Sept, we sailed, so I have’nt seen Ben since then.

This is a huge convoy of transports, 4 – in all, & we have cruisers & battleships escorting us.  The old Dilwara used to be just alongside of us, but too far off to distinguish people. But ½ way across the Indian ocean she went gadding off on her own, with a small cruiser as escort, most exciting for Ben, was’nt it. She went on to land troops at Aden, & pick up some fresh ones, & this morning I can see the old Dilwara tearing along to catch us up. You see the Konigsberg, that small German cruiser, is still knocking about in these waters somewhere, hence the elaborate precaution of escorts.

Well, we ought to reach Suez in a day or two, but we shall take about 3 days getting through the canal at least, with all these ships, so I don’t suppose we shall leave Port Said till about 4th or 5th October, & then perhaps we may know more where we are going. The Dilwara I know is going to Southampton, & should arrive there I should think – this is only my own idea – about 25th Oct, but no doubt Ben has told you something more definite than this. I expect you could find out from the India office when she is expected if you want to run down and meet old Ben- of course there is just a chance that we may stay a day or two at Suez or Port Said, waiting while we all get through the Canal, in which case I may be able to get over to pay the Dilwara a visit, I hope so. What fun it wd be if Paul & the Gloucester were at Port Said too, & were part of our escort through the Mediterranean, & then we’d be quite a family party on the high seas. We met a small 4-funneled cruiser last night, but could’nt make her out, & I was wondering if she was the Gloucester ordered off East somewhere. Ainsly Talbot was on board the Dilwara, but has been landed at Aden. But Ben will have told you all the Dilwara news I expect.

It was a rough-ish, choppy sort of weather for the first 3 days out of Karachi, & I expect old Ben had to stick to her cabin. Our men, who of course have never seen a ship or a sheet of water bigger than a bucket before, were fearfully ill poor devils, but are much better now. Since the first 3 days we have had a gorgeous voyage, sea like glass, & cool breeze. The first day in the red sea was hottish, but since then it’s been lovely; hot of course, but a good strong head wind to keep us cool. I want to see Ben at P. Said or Suez to see how she stood the voyage so far. 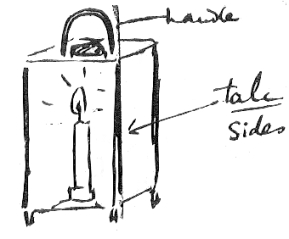 By the way, I want you do to something for me, I want a camp lantern, to take candles, something after this style. If talc sides not procurable, glass will do, but I’d rather have talc if you can get em. You can get them at the [Army Navy] Stores or Harrods or any stores like that I think. They are generally made of black tin, with talc sides which slide in & out, & weigh about 1 lb. If possible I should like a folding one, but never mind if it does’nt fold up, an ordinary one will do. But it should be square shape, as above, & please send out one or two extra talc slides with it to replace hem if they get broken. Anyhow the A & N stores camp furniture dept: would know the thing exactly if you ask them, as I know they keep them, but I expect there’s been a run on them lately. Anyhow, have a shot will you at getting one, p’raps some military stores in Aldershot wd have one. Well, having got it please pack it up ready to send it to me when I can give you an address- of course wherever we land we are bound to sit down for a week or two to get men & animals fit after this long voyage, as we shall all be pretty soft, so we shant go gadding off at once, & there will be lots of time to send it to me. P’raps the India office will publish an address, but if they don’t & if we’re not allowed to tell you where we are (quite possible, this, as they keep things so secret) then you might ask the India office what address to send things to. But they are sure to let you know some address.

The sea here in the Red Sea is a most gorgeous colour, deep blue, & a gorgeous wind blowing. I am feeling most awful fit & well, & so much better than I ever did or do in Lansdowne. I can see the old Dilwara just off our starboard quarter, fearfully nautical these days, but its too far off to distinguish people easily, even with [field] glasses. Funny to think how hot we are now, & in about a weeks time we shall be shivering with cold I expect. We’ve only got think khaki drill kit, so lets hope they give us some warm clothes before we start. I’ve got lots of warm cardigans etc, but our kit is limited to 35 lbs!! So we can’t take much. Ben gave me a lovely Cashmere cardigan jersey, a blue one. I thought my yellow one was too good for this show, so Ben has got it & I’ll wear it all right after it’s all over. She tells me she got the lovely purple scarf you sent, & is very envious, but she’s going to keep that too for me. Thanks awfully for it, I’m simply longing to get hold of it & wear it, as I love those scarves. It arrived after I’d left Lansdowne. I hope you are all fit & well at home. we have’nt heard much war news, just a few spasmodic wireless messages; but what we have heard seems favourable; I wonder what the situation will be when we get there. I will stop this letter for a bit now, & finish it off later, when we reach Suez or P. Said.

Am sending this home by Ben. I believe we are going to Marseilles, but dont know for certain. Awful hurry. Tons of love from

Note – the first part of this was written entirely as one paragraph, though presumably on several pages of note-paper.  It has been split into paragraphs to make it more legible.