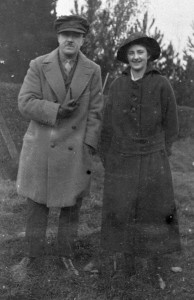 In her 1980s edited version of these letters, my mother wrote:

On the 29th October… the Fieldings and some of their friends went for a walk in the beech woods along the ridge of the hill above the house. It was a glorious Autumn day and the anniversary of Ted’s first going into the trenches… He could not but have been aware of the contrast and perhaps it was this that inspired him to ‘speak’. That evening he and Nell visited her aunt, who lived a little lower down the hill, and under the spreading chestnut trees in her drive, on their way back to Broadsground, they became engaged.

The Fieldings seemed to be slightly taken aback, although the domestic staff were well aware: at that first evening party [some six weeks before] word had gone out to the kitchen that it was all right; he had taken ‘the right one’ in to dinner. Of course, they had three older daughters still unmarried and, not only was Nell still only seventeen, but she had been engaged briefly at the beginning of the year to a young Sandhurst cadet who was about to go out to France. His mother had forbidden it on the grounds that they were both too young and the romance seemed to be fading when he was killed in action. Nell was always to feel a little guilty that she appeared to find consolation so quickly with someone else and for years she wore the gold half-hunter watch that he had given her on their engagement.

The Fieldings, however, were loving parents and they compromised. The engagement was not forbidden but it would not be recognised until Nell was older.

Posted by Ted Berryman on 29 October, '15 in About