Gertrude clearly consulted Richard as the family’s doctor about Ted’s time in hospital with dysentery.

Your wire & letter arrived by same post today. I am sorry to hear Ted is down with dysentery. What bad luck & just as he had a chance [of active service]. Anyhow let’s hope he’ll soon be well. He’s sure to get good attention nowadays, & no one ever pegs out with dysentery. “Seriously” only means rather bad, it’s not like “dangerously”. Very difficult to write much nowadays. More in a few days. Best love to all. Don’t worry.

I’ve not been able to track down where Richard was in France at this time. However, this picture provides a dramatic counter-point to the little information he gives his mother about catching fish and harvesting their garden of beans, lettuces and vegetable marrows. 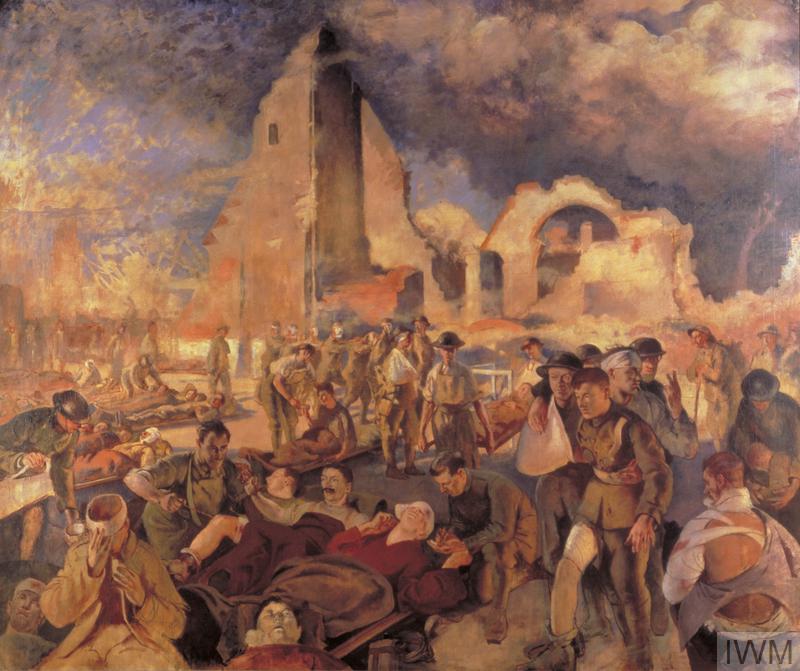 Text from the IWM Site: “Henry Tonks is perhaps better-known for being the drawing master at the Slade School of Art and teacher to the likes of Paul Nash, Stanley Spencer and CRW Nevinson. He also was a surgeon and during the First World War served with the Royal Army Medical Corps. Therefore, Tonks was an apt choice for a commission from the British War Memorials Committee to depict an advanced medical dressing station. The painting captures a scene amid a German offensive in 1918, within which Tonks makes full use of his medical expertise to showcase a wide range of injuries, treatments and field dressings. The finished painting was intended to be hung in a purpose built Hall of Remembrance, to celebrate national ideals of heroism and sacrifice. However, the Hall was never realised after the First World War and Tonks’s painting, along with other commissioned works, were transferred to the Imperial War Museum..”

Posted by Richard Berryman on 14 July, '17 in About