We have been wishing you were home this week, we had a real old pre-war madcap of it on Friday- & longed for you & Marjorie. Captain Davis is now at the camp on Sneedham’s Green & he asked us to a tea party on Tuesday & we had a jolly time of it & played “up jenkins” on his bath for a table!

Two other officers – a Captain Berryman & Mr Culverwell were at the party, both very jolly & both home from the front- They belonged to the Indian army & were wounded & are now temporarily attached here. Well – during tea someone said what a pity we couldn’t have a fancy dress ball or some such jollification in the old Y.M.C.A tent! So we suggested our house as a trifle more feasible & so we fixed it up then & there for the Friday evening! The only other guests were Auntie, Bertha & the rector & Mrs Williams, who are staying at Belmont & Helen Fox.

We all dressed up & at 8 our guests arrived & were rigged up variously as greek, pirate & turk! Captain Berryman is a great sport, you’d like him awfully, he simply kept us in fits, Father was nearly ill & Auntie kept on gasping “I can’t laugh any more!” I hope he’ll still be here when you get your next leave.

Aileen Vinicombe & Margaret Walker are staying here too so we were quite a jolly party. I really think you would lose your heart to Margaret, she is one of the most taking little persons I know. A bit like little Marion only much more in her.

The rector came late & when he did make his appearance he came solemnly in pyjamas, & carrying a baby’s bottle & a candle, a beautiful dressing gown, night cap/& walking round the room, still very solemn, he at last found Babs to whom he presented the feeding bottle!

We had a very nice photo arrive yesterday from Oxo in his officer’s kit. He is attached to the 2nd Gloucesters. Did you hear we have a cart for Nobby. A ralli car in neutral coloured wood, upholstered in grey- It is quite smart & runs beautifully. So the C.O. looks kindly on you, don’t be overcome by his blandishments whatever happens!

I suppose it’s no good thinking yet about another leave but I do hope it won’t be so long on the way this time.

We had all the clerks from the office here yesterday, several of them said “We want Jack here today”. So we did & so we do so can’t you get down again soon. How about your teeth by the way – oughtn’t they to be seen to?

Must go now as I’m due at the camp.

Ted met four sisters at a tea party on Tuesday 7th September at the camp at Sneedhams Green outside Gloucester. The Fielding sisters had been invited to tea by an officer returning hospitality who asked Ted to come along to help him entertain them. As Gladys says in her letter to her brother, this led to the party on Friday the 10th at their house above Gloucester.

The sisters were still in mouring for their grandfather and were not sure what to wear. Nell, aged seventeen and the youngest but one, compromised with a white blouse and a black skirt and tied her dark hair back with a black ribbon.

Their father John Fielding owned an engineering works in Gloucester. He and his wife Pauline had five daughters including Gladys who wrote this letter to their only son, her brother Jack. 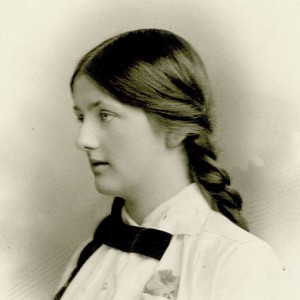 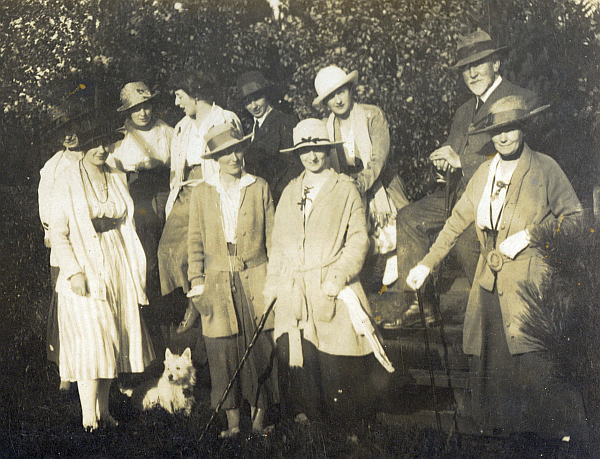 Posted by Others on 12 September, '15 in Ted Berryman