These are the stories of our young men

Three projects that have caught my eye are projects where people are using the internet and other ways of researching family history to uncover the stories of their local heros.

The first that I noticed was @NamesOnStone who is one of a group of people researching the story of all the men who died in the Great War 1914-18 and are remembered on the war memorials of Flintshire, North Wales.

These are the stories of the young men who had attended our schools, played in the lanes and streets of our towns and villages and worked in the fields, mines and industries of Flintshire before they went off to their deaths fighting for King and Country. – FlintshireWarMemorrials.com

I asked @NamesOnStone to suggest stories links for this blog and these are the ones she suggested.

Griffith Piercy was shot by a female sniper on the 1st October 1918 when he was 21. His story and that of his brother William is full of family photographs.

Three brothers, Edgar, Rowland and Douglas Rogers were all at Gallipoli on the 7th August 1915 where two of them died. Douglas was killed first, and when Edgar went to help him he too was fatally wounded. Rowland found Douglas’s body and buried him, but Edgar was buried at sea. 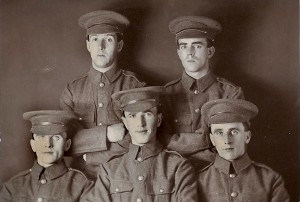 Charles Blackburne, his children Audrey and Peter and their governess Mlle de Pury, drowned when the ship they were on, the RMS Leinster was torpedoed by a German submarine on the 10th October 1918. Apart from the fact that these were civilian deaths, there is something horribly poignant about deaths so near the Armistice. 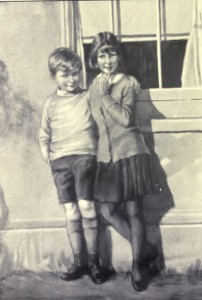 Peter and Audrey Blackburne. A watercolour by Miss K Mayers

Then I had a twitter conversation with @ClassyGenes about whether spending so much of our time thinking and working on the First World War will lay our ghosts, and I discovered her Castleton Lanterns Project. She is trying to find out about men in photographs, the congregation of a Church, without even their names to start from.

In April 2013 we found a box of old lantern slides in the organ loft of Alexandra Presbyterian Church. The images were of soldiers and sailors in First World War uniforms.

There are 77 lantern slides in total which were made by the famous photographer Mr Alex. R. Hogg … ‘of our men at the front’… we have now established that the lanterns include both men who survived and men who were killed in action.

The Ulster Museum would like to give these slides a home, It is unusual to have this type of evidence gathered together with, we hope, an image of every serving son of the Castleton church community recorded for posterity.
Castleton Lanterns – About the Project

When I asked @ClassyGenes for some pages, these are the ones she suggested.

Samuel Fee, who was already a sailor at the start of the war (his service records describe his tattoos (a bust of a man and a figure of a woman) but he was killed aged 25 when the ship he was serving on was torpedoed. I don’t know what it is about him, but Samuel Fee seems to have a very modern face.

The story of Patrick Bryan Adair reminds us that people did survive fighting in the First World War, and this is one of the unique features of the Castleton Lanterns as a memorial project. He was a fire officer both before and after the war, and died in 1941.

Francis McCann, his brother James McCann and James Magill – as @ClassyGenes says “These three men and all the Castleton Lanterns men were closely connected, brothers, best friends, pals and colleagues. … It is sad to hear the stories of those who were lost or wounded beside those who lived and flourished and I’m sure the families who gathered to watch the lantern slide show in 1918 must have felt something similar.” 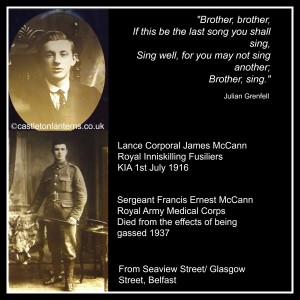 The St Helens Roll of Honour is a community project, run by and for the people of St Helens in Lancashire and tweeting updates @SHRoH. It’s designed to be easy for local people to comment and add content. They have pictures of the war cemeteries in Flanders and France, as well as the war memorials at home. When I asked for a story, this is the one they sent me:

Lance Corporal Bertrand John Allender who was killed on the first day of the Battle of the Somme. His parents were told of his death in a hand-written letter from his sergeant, who kindly told them “… he was always talking about his father and mother, all the lads of his section miss him very much and send their deepest sympathy, Bert suffered no pain as death was instantaneous in fact the lads did not know he was gone… ” Those letters were dreadful to write, and dreadful to receive, but at least the humanity shows through.

Not everywhere has such a sense of connection with the soldiers whose names appear on the memorials, or whose faces look out at us from the photographs. St Chads Church, Cheetham Hill in Manchester don’t even have their war memorial. (How do you lose a war memorial?) The only record they have is a photograph and not all the names are legible.

There are local projects all over the UK, a twitter search on the #ww1 hashtag is a good place to start.  Or browse the list of people I follow and the lists of people they follow, and so on.

Posted by Family Letters on 21 February, '14 in About