LA COUTURE was reached by the last Company about 3.a.m., on the way back the Regiment had to march down a road which was being heavily shelled all night by the enemy, and 3 men of the Dogra Company were hit. The road was much congested with traffic, as the Sirhind Brigade were marching up it in one mass into the trenches to relieve the Dehra Dun Brigade. It was afterwards stated that some 300 casualties occurred on this road during the night from shell fire. On the way back the men collected as many of their great coats as they could find, which had been left in the 6th Jat trenches on the morning of the 10th previous to the attack.

The men had hardly settled down in LA COUTURE when orders were received to march early next morning to billets near L’ESTREM. Battalion marched at 7.30 a.m. and reached billets at CROIX MARMEUSE at 10.30 a.m after a long wait on the road for the billetting officer.

The march as necessarily a slow one as the men were much fatigued after their strenuous efforts of the last 3 days. Billets were much scattered here.

At 4.40 p.m. orders were received to march at once to RICHEBOURG St VAAST. the men were cooking at the time, and most of the food had to be thrown away and the Regiment fell in immediately and marched off. The march was very slow, and several men wanted to fall out owing to bad feet. In fact the feed of all the men were in a very bad way and the regiment was in no condition to do any more hard work till it had a day or two’s good rest and food. CROIX MARMEUSE was left about 5.45 p.m., and RICHEBOURG reached at 9.5 p.m. and on arrival their billets were allotted but proved difficult to find as there were so many troops in the village and no Staff Officer to show us till he was seen and fetched out. However sufficient rooms were eventually found and the men got what rest they could.

All ranks heard with the deepest regret this day that Major MacTier had been killed in action while commanding the 1/39th G, Vice Colonel Swiney, wounded.

The Unit War Diaries are held at the National Archives. Ted was Adjutant and often wrote them, but they are typed and it’s not possible to tell if he wrote them. In this case I wonder if Drake-Brockman wrote or dictated the diary.  Major “Mac” was a close friend of Ted’s.

Posted by Others on 12 March, '15 in 39th Garhwal Rifles, Neuve Chapelle

At 5.a.m. orders were received placing the Battalion at the disposal of the G.O.C Dehra Dun Brigade, in connection with operations to be under-taken on the morning of the 11th. The Battalion was ordered to support the Right flank of the Dehra Dun Brigade, which was to attack the BOIS de BIEZ that morning. Accordingly the Battalion marched off once more and reached their appointed position on the R. flank of the Dehra Dun Brigade at about 6.30 a.m. The morning was foggy and cold. The Battalion took up a position in the open ground in front of trenches captured the previous day and now occupied by the 2/Leicester Regiment and the Seaforths. Touch was gained with the 2nd Gurkhas on our left and all as in readiness to support them when they advanced. The prospect was not a pleasing one as, the ground was absolutely open for 800 yards, and it was across this that the Battalion would have to advance, as it was, the battalion lying out there in the open suffered a good many casualties from rifle fire and snipers, and eventually the C.O. ordered their withdrawal into and behind the trenches, where some dead ground in an orchard afforded a certain amount of cover. here the Companies entrenched themselves, A report was sent into the G.O.C. Dehra Dun Brigade explaining the situation and pointing out the extreme difficulty of the task allotted to the Battalion, i.e. to advance under fire from 3 sides across the open ground. Meantime our guns shelled the BOIS de BIEZ heavily the enemy replying occasionally with rifle and machine gun fire. Considerable movement was seen in the German trenches opposite the Battalion, and it was evident that a good number were collecting there. the Bombardment of the BOIS de BIEZ continue practically all day, till about 4.p.m. Rations were brought up for the men by a party fo the 28th Gurkhas, the first food the men ha since leaving RICHEBOURG St VAAST, except what they had in their haversacks with them.

The Germans opened a fairly heavy shell fire all along the line from 4 to 5.30 pm, but no much [sic] damage was done.

At 12 midnight orders were received from G.O.C. Dehra Dun Brigade to march to billets at LA COUTURE. Which was reached at 3.a.m.

Casualties during this day.

Captain J F Parkin, 113th Infantry (attached) had been wounded on 10th instant while doing duty as Brigade Bomb gun officer through the busting of one of his own bomb gun while assisting in the attack on NEUVE CHAPELLE.

The Unit War Diaries are held at the National Archives. This time I find myself hearing echos of Drake-Brockman’s voice in the understandable irritation in this account and its overview of the day, and I find myself wondering if he dictated it.

Posted by Others on 11 March, '15 in 39th Garhwal Rifles, Neuve Chapelle 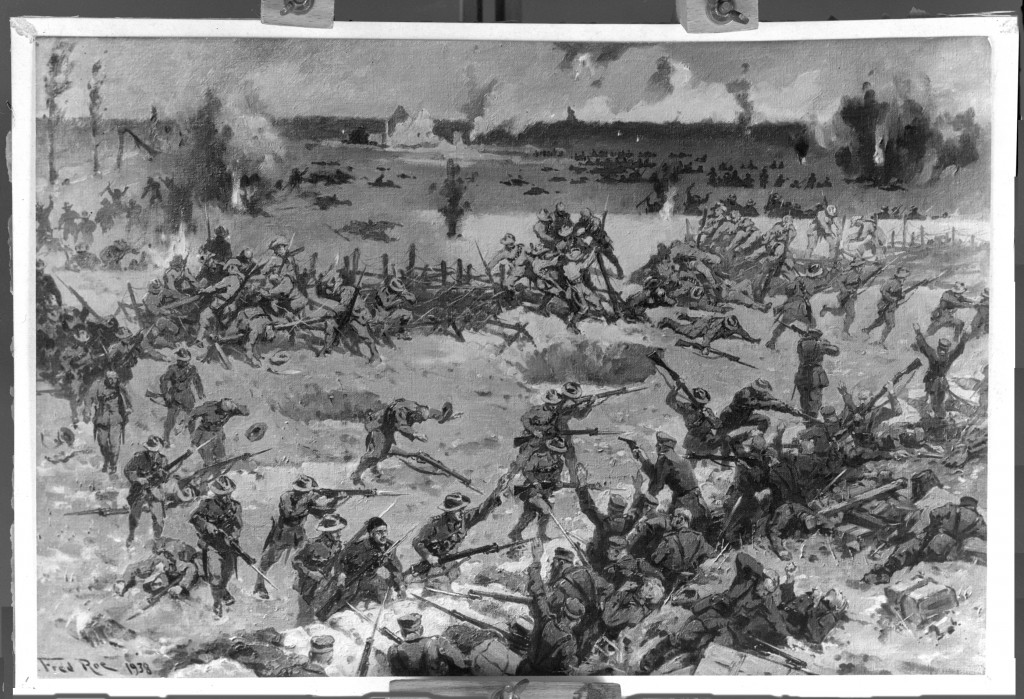 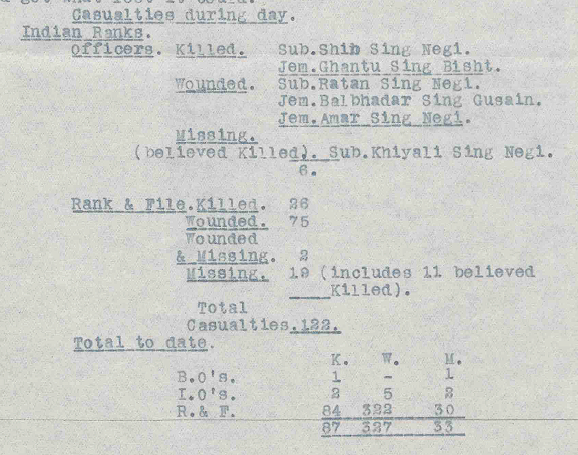 Cold morning with wind and frost, with some snow during the day. Final preparations made for going into trenches to night, taking over Bombs, ammunition etc.

Orders received to march to position of assembly in 6th Jat trenches along ESTAIRES-LA BASSÉE road at 1.30 a.m. on 10th.

The Unit War Diaries are held at the National Archives. As Adjutant, Ted was often responsible for writing them. It’s hard to tell when he wrote them because they are often typed, though sometimes his voice comes through.

Posted by Others on 9 March, '15 in Neuve Chapelle