Dear Ben I got your parcel last night of mitts and Balaclava caps for the men. Thanks most awfully for them my dear, they are most acceptable and the fellows I gave em too are fearfully pleased. You see government issue them with a Balaclava cap each, but they lose them or tear them or something so one can always – or nearly always find a use for one or two of them. And the men seem to like those knitted wristlets too. I think I only wrote to you 2 days ago so you can imagine I have’nt much more to say.

We have got a lovely underground room, about as big as the Delaford dining room [their childhood home], only not so high of course. It is floored with doors from the ruined houses all round, & roofed in the same way, with earth and turf on the top. We have bagged chairs tables & crockery from the houses too (this is not looting, but quite fair, as the houses are mostly flat on the ground and you have to grovel about among ruins to find anything; and stray bullets keep on zipping about & hitting the walls with an awful smack, a most evil sound) so we are awful cosy; it is our mess, where the C.O & I live, also the officer of the company in support. We have a little charcoal fire, & cook our bacon & potatoes over it. All the other officers of course live in the trenches, but change about, & get their turn here.

It’s raining today, which makes the trenches in a beastly mess, feet deep in mud, & it’s awful walking about in them. You see the C.O [Drake-Brockman] & I make periodical tours of the trenches & have a general look round. They are at the present moment letting us have some “Black Marias” for some unknown reason, as their Maria battery is supposed to have gone away & they certainly have’nt been shelling us like they used to. 3 shrapnel also burst right over this dugout just now, but did no damage as we were safe inside. They know troops are here of course, & I fancy just give us a shell or so occasionally for luck.

I like this pencil I’m using, it’s called the “Eagle copying ink Pencil, No 1522”, it’s a short one, with a tin cover thing, do you think you couId manage to send me one a week, in an envelope as they are infernally useful. This is rather a good card you have sent, there’s such lots of room on it. I see accounts in the papers of officers getting 96 hours leave to England, so don’t be surprised if I turn up one day, only for goodness’ sake get some mufti [ie non-uniform clothes] ready for me, & a hot bath. Our guns are firing at the Maria battery now, & she’s stopped thank goodness, as you never quite know where she’s going to fall. Must end up now & get this censored. Thanks again & tons of love Ted

Then a postscript around the margin:

I think we are in for another whack of cold weather, as there’s a bitter wind today, & rain, which will turn to snow soon I expect. Hurry up my new khaki as this drill stuff is awful

Good news, a man in the 1st Batt has got the V.C the King gave it him yesterday

I think Fred Lumb will get something too

The 1st Battalion …. was awarded one Victoria Cross to Naik Darwan Sing Negi, who led round each traverse. Captains Lumb and Lane each received the Military Cross for their gallantry in this action, and several men got other decorations.

Very many thanks for your last letter. We are still in these trenches and no sign of being relieved yet, and we are all very tired and weary as the continual strain takes it out of one a lot. Shell & rifle fire goes on all day, and one has to be very wary walking about the trenches by day, as the Germans have special picked shots posted in houses, trees etc who poop off at anything they see moving about. So it does to exercise a certain amount of caution, even if it involves a hands & knees crawl for a few yards over any bad place. But as we have now been 13 days & nights in the trenches we have of course burrowed about and made quite a rabbit warren of them. Still if one does get careless & show oneself a bit too much, as sure as fat ‘zip’! comes a bullet whizzing along from somewhere. We sent out 50 men the other night under Major Taylor (Ben knows him) to round up some Germans in a trench close to us. We cleared them out of the trench, & bagged six prisoners; they seemed quite cheery & not at all downhearted at being captured.

While this was going on, all the rest of the enemy let us have it very hot, & we had a very hot ½ hour, but were fairly safe in our trenches & did’nt suffer much; I don’t know what the German loss was, but I fancy we did some damage. Last night all our heavy guns bombarded for 3/4 hour a little village in front of our position where the enemy are very fond of collecting and annoying us. So we turned all our guns on to it and you never heard such a din. The whole sky was lit up with bursting shells, & an appalling noise, & heavy rifle fire going on at the same time. This morning the village is just a blackened heap of ruins, & the trees (you can see through your glasses) are all bust & stripped of branches. Does’nt it seem an awful shame that a ripping little village like that should be so ruined, and a French village too, as we are still on French soil; but I suppose such things are necessary in war.

We are all very fit up to date, though tired & sleepy. But every day they try and attack us to break through, & every night too, in fact one is always on the alert, & one simply longs to get out of these trenches & go for somebody; but our orders are just to sit tight here and hang on till all’s blue while bigger things develope elsewhere. We are much too weak a force to advance, & only just able to keep off these attacks; our line is appalling thin in parts, and we can only hang on with difficulty. Old sportsman Bobs is out here, & has sent for 3 men from each regiment in the trenches to see & talk to them; jolly sporting of the old man is’nt it.

I have had several papers from Rosamond I think, & some cigarettes from Aunt Nellie; please thank her, & I will write when I have time; her gift was much appreciated by the men.

So glad old Ben’s arrived home safely. I had a long letter from her a day or 2 ago. Can you send me a weekly newspaper, say the weekly times, as we never hear any news of the outer world here, & I don’t know in the least what’s going on, I wish they would relieve us; the regiment we relieved in these trenches were here 12 days & said they never wanted to see a trench again; it’s this awful waiting, doing nothing but sit still & get shelled daily as regularly as clockwork that palls so; if we could only advance or get a move on of sorts it would be an improvement. The farm we are round about is full of apples potatoes cabbages etc, so we go round at night & loot the garden for our meals, as we get no fresh vegetables from the commissariat, only tinned meat, jam, bread & cheese, so one wants a little green food occasionally.

It’s awfully cold here, especially in this thin Indian khaki. But thank goodness we are going to get the warm kit soon, at least we have been told to apply for it, but when we shall get it I don’t know. I wish I could get at my kit to get that sweater out; I want another warm thing to wear, especially at nights. I have got a lovely Jaeger Balaclava cap, just like the man in the picture in the Stores list! So tell Ben I shan’t want one now. The gloves you sent are gorgeously warm; you see it’s so raw nowadays, & very damp living underground such a lot. But on the whole we have been very lucky in the weather, we had all our worst time before we came here, & heavy rain in these trenches would be awful. ‘Jack Johnson’ just beginning his daily visits; yesterday they shelled us all the morning but without much result except noise. Very heavy firing going on up north, so I expect there’s a big battle going on up there, but we never got any news. Matches are always welcome, as there is an appalling slump on them just now. Love to all your loving son

Just had a top hole breakfast bacon cabbages & ‘tatoes all fixed up together & some lovely slices of French Bread & butter. I don’t quite know what I should do without your lovely silk scarf. So glad Jim is so fit, I wish he wd hurry up & come out. I wonder if we shall meet, hope so.

Written in indelible pencil on leaves torn from a signal pad.

“Old Bobs” was Lord Roberts, a retired general who had launched the Comfort Fund for Indian soldiers. His visit was to prove fatal: seeing that the Indian troops did not have great coats, he took off his own. The visit took place on the 12th November (the day after Ted’s letter) and the next day Lord Roberts contracted pneumonia, dying on the 14th a few miles from the Front. 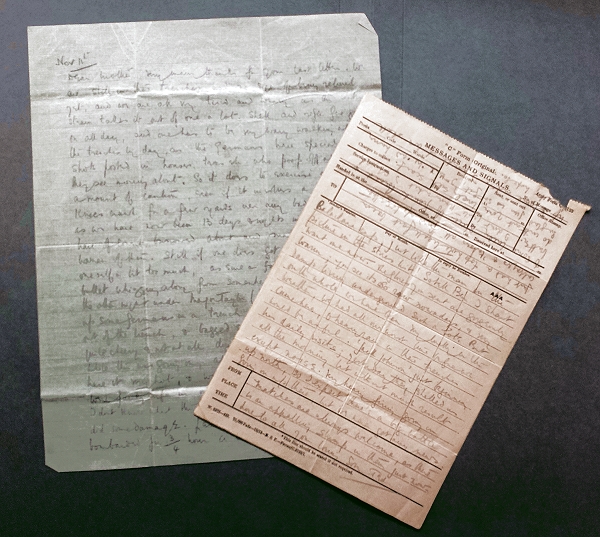