Thanks most awfully for your last few letters. I’m afraid I’ve been very remiss in answering them, but I have’nt had a moment really. We came out of those old trenches on the night of the 27th, after doing 25 days & nights there, pretty long time was’nt it. We were glad to be relieved as you may imagine, the men were all absolutely doggo, as they had to work day & night to keep the trenches for from falling in, because the weather was so wet & beastly that the earthy all got sodden & soaked & had to be simply propped up, & our trenches were simply lined with boards & old doors & anything we could get hold of. I am writing this in nice comfortable billets miles away from the firing line where the whole Indian Army Corps has come for a rest for 3 weeks or so.

I have’nt much news to tell you except an extraordinary thing which happened on Christmas day. To begin with on Christmas eve all the German trenches were lined with little lights, which we afterwards discovered were Christmas trees. Well next morning we heard them singing & shouting in their trenches, and about midday they began lifting up hats on sticks and shewing them above the trenches, then they shewed their heads, & then bodies & finally they climbed out of their trenches into the open! Of course one could’nt shoot them in cold blood like that, tho’ one or two shots were fired; and after a bit we also scrambled out of our trenches, & for an hour both sides walked about in the space between the two lines of trenches, talking & laughing, swapping baccy & cigarettes, biscuits etc. They were quite friendly & genuine, & our Col: who talks German had a long conversation with them, & asked them how they were & everything, & you would never believe that we had been fighting for weeks. After about an hour their officers shooed them back to their trenches, and we came back to ours, but for the rest of Christmas day & night, & all next day, 26th, I dont suppose 2 shots were fired hardly by either side! Was’nt it weird?

By the way, leave is now open, & 3 of our fellows have gone on leave. I am, I hope, arriving in London about 3 o’clock on the 8th, if all goes well, as my turn is next; so you can expect me home, with a fair amount of certainty, on evening of the 8th, probably by a train leaving Waterloo about 5-6 o’clock. So if anyone likes to hang about Waterloo anytime about then they are fairly sure to meet me. Is’nt it GORGEOUS!!

Happy New Year to all

Ted’s CO, Colonel Drake-Brockman, gives a more detailed account of the Christmas Truce in his memoirs.

The cartoon below comes from Ted’s letter to his sister Jane, also about the Christmas Truce. It shows a Garhwali soldier saying ‘Bonjour Fritz’ to a German who’s wearing his pickelhaube and saying ‘Salaam Salaam’ back. 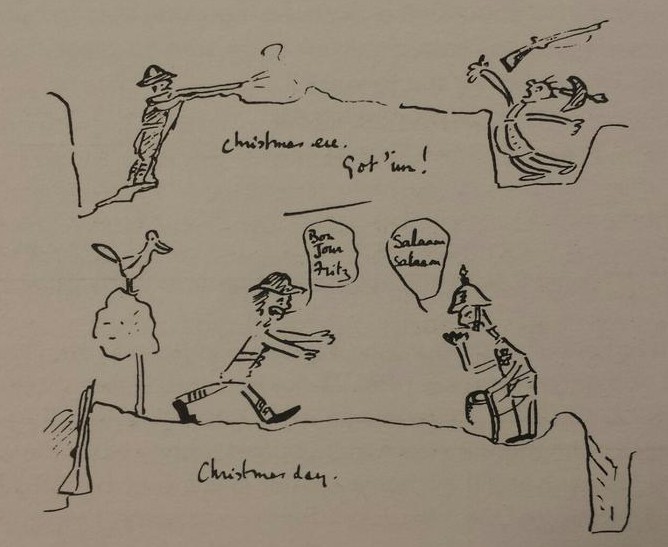 Posted by Ted Berryman on 24 December, '12 in About, France, Primary source, Waterloo