All the same in a hundred years

Every year I spend Christmas and New Year with my family of 100 years ago, loading letters written by my grandfather and his siblings and tweets about them for the 12 months ahead. It’s a deep dive into their experiences during the Great War.

1916 had been a mixed year for the Berrymans: Ted and Richard were safely in India while Paul spent most of the year playing hockey and performing theatricals with the Fleet in Scotland. But at the end of May he “lost heaps of pals” when he fought in the Battle of Jutland. His letter about the battle led to me standing, a hundred years later, in front of the Navy’s new Aircraft carrier, wearing a high viz jacket while being interviewed by the BBC for their commemorative programme. In Orkney the commemorations focused equally on the parallel experiences of the Orcadian civilians and the British and German Navies. Meeting German sailors on a British Warship in the harbour at Kirkwall was a powerful statement that “that was then and this is now”. 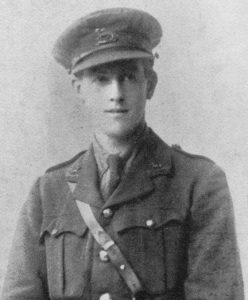 The slaughter on the Somme puts 2016 into sharp perspective. Ivan Bennett, Benedicta Berryman’s fiancé, was killed there in June. The most meaningful part of working with the letters for me, has been discovering Ivan’s story piece by piece. We knew only two things about him when we started: that the Berrymans didn’t like him and they called him “Wiggs”.  In the last four years we have found out who he was, the tensions and tragedies in his own family and much more about the difficulties he and Benedicta faced when they became engaged. Finally, at the end of the year, I found this portrait photograph of him and I finally feel some closure on this story of star-crossed love.

Topher first went to France at the beginning of the year, and his unit fought on the Somme, but we don’t know if he and they went over the top on that first day. He continued to have a wretched time, outshone by his heroic elder brothers. We will see that Richard asked for Topher to be assigned as his groom early in 1917, which was a comfort for their mother. But our current understanding of dependency and power within a family makes me worry for clumsy, stammering Topher working for clever, impatient Richard.

Ted ended 1915 spending two nights in an open boat, before being rescued after a shipwreck in the Mediterranean. He was sailing to Egypt, and he spent 1916 there and in India where he was bored and frustrated. He was newly engaged, and his 1916 letters show a complex mix of grief, survivors’ guilt and envy because volunteers were getting action and promotions which he (a career soldier) was missing out on in India. One of the more amusing sub-plots concerns his dress sword – necessary for the glittering events surrounding the Viceroy’s residency in Delhi – but still a weapon and impossible to send through the post.

We hear almost nothing from Jim in 1916. He was not a natural soldier and did not adapt well to army life. So much so that Ted and Paul both show some irritation that he still hadn’t left British soil when the war was two and a half years’ old. He married Sheina Hellier in September 1916 though the arrangements for their wedding show Jim’s characteristic vagueness.

The Berrymans’ experiences in 1916 remind us that although the Great War was a global blood-bath, it was also mundane and even dull for many of those involved who were kept on the side-lines. The letters also show us the siblings’ different characters – Richard, charming, impatient, and lacking insight; Jim, unfocused and ill-adapted to army life; Ted, curious, thoughtful, dutiful, fully-engaged with the complexities of the international situation, and frustrated at not being involved; Paul, sporty, making the most of Naval life, but kind and courteous too; Topher, cold and unhappy, outshone by his heroic older brothers; Jane, energetic and social, opening a tobacconist shop in London and a firm favourite with her brothers’ friends. The other girls are harder to know, except for poor, grief-stricken Ben, her unhappy love affair coming to the unhappiest of conclusions.

In 2016 we have been disorientated by change and shocked by the deaths of many of those we admire, and I have often reminded myself that a hundred years ago the world was more frightening and far more deadly. We are blessed that those left us this year had acted in front of cameras and sung into microphones; that they, and we, had schooling and didn’t have to spend our lives digging the fields or sewing shirts; that the men did not drown at 18 in the Flanders mud and the women did not die at 22 of sepsis after child-birth; that none of them died of Spanish ‘Flu or tuberculosis. Whatever battles we have to fight, the world has given us much in the last 100 years.

1917 will be a busier year for the Berrymans. We will see more romances, there’ll be another shipwreck, Ted will fight in Mesopotamia in places like Basra and Baghdad which are still in the news today, Richard and Topher will endure in the mud of France.

So as we start 2017, I wish all of us the good wishes the Berrymans wished each other 100 years ago.

Posted by Family Letters on 2 January, '17 in About

6 responses to “All the same in a hundred years”