If you are interested in a particular topic covered in the letters, just let me know. These are the talks I have available, with audience feedback.

Grief like jagged glass: is commemoration for the living or the dead? 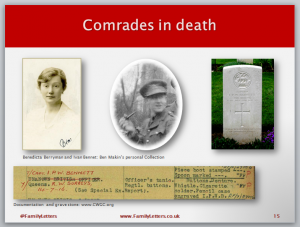 The bones of men killed at Waterloo were ground up and used as fertiliser, and the poppy symbolised forgetfulness before it became the symbol of commemoration.

How did these things change to the point where the dead of the Great War are buried in the vast war cemeteries of Northern France? Why do public figures publish newspaper articles every November about how best to respect the dead by wearing – or not wearing – a Poppy?

I look at the groups that have adopted the Poppy, the money they make, and the meaning they ascribe, and I explore what it says about us that the Poppy is more popular now than ever.

CFH – I loved your talk as always

SM – Really got me thinking

Not just Tommies in France: the Indian Army in the First World War 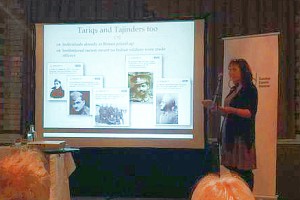 Giving the talk “Not Just Tommies in France”

One third of the men who fought for Britain weren’t British at all, they were from the Empire. One in six were from the countries that are now India, Pakistan and Bangladesh.

This talk looks at these men’s contribution to the First World War, why young hill farmers signed up to fight for the British, how they were treated, and the history of their campaigns in France and Mesopotamia (the country that is now Iraq).

I also look at why their contribution is largely forgotten today, and what is being done to change that.

CFH – Your talk was lovely. Lots of friends back home at the dawn services this morning. Made me feel quite home sick. [I gave the talk on Anzac Day]

The First World War by letter: a public and private history 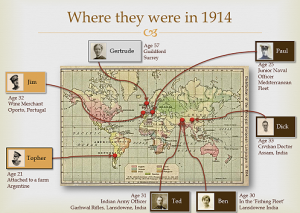 Slide from the talk

You don’t tell your mother everything in peaceful times, even less when you are at war, so in this talk I ask how good are letters as historical sources?

I compare what the brothers wrote home about the Christmas Truce, the battle of Jutland, the sinking of the merchant ship the SS Persia with what we know from other documents, to see what we gain and lose when we read their letters.

I compare my mother’s task when she published the letters in the 1980s with my task now, looking at the difference the Internet has made to discovering the research that other people are doing about the same people, and I show how one vital piece of information can unlock fascinating tales.

RDP – Really enjoyed it and even shared it on my Linkedin and Facebook military history groups…still reading the letters this morning and this afternoon…so much fascinating stuff!

Myths and Truths of the Christmas Truce

This talk includes my grandfather’s first hand account of the Christmas Truce and covers the research done by Taff Gillingham about the locations of the only two identified football kick-abouts that took place during the Christmas Truce.

I don’t charge to speak, but I do need travel expenses (I am based in Scotland but can combine trips to reduce costs).

To discuss booking a talk, use the contact form.