I seem to have a lot of letters from you to answer – we got 3 mails altogether a few days ago, & I got 4 from you dated 5th 12th 13th & 19th September. Thanks most awfully for them, also for the papers which always turn up safely (tap wood) & are most welcome.

I have’nt much news for you. I had to go down to Feluya for a day last week to have my tooth finished off [presumably Fallujah]. He only had to put the stopping in so it did’nt take long & he did’nt hurt, it’s so difficult to get about in this country, you have to wangle lifts in various cars etc. I stayed with Sam Orton at Feluya, I was only there one night & I came back next day. A vile day to day: SE wind and the air thick with dust. Yesterday we went out on a reconnaissance about 5 miles beyond the outposts but saw nothing.

In to-day’s communiqué I see we have got Tekrit, north of Baghdad. I wonder what our next move will be. I am sending along a card which they give us out here, a ghastly production but I’m afraid it’s the best I can do. We just got Ramadie in time to appear in the card as you can see- all the other names are former scraps out here-

Yes I see London has been raided a good deal lately, but Ben writes to say how wonderfully calmly people take it all. So glad to hear the specialists’ opinions on Capon are so hopeful but as you say it must be awkward having him on the sick list. I do wish old Nell could manage to get up to Delaford for a bit, but she writes to say she is very busy nowadays as her sister Gladys is not very fit & she has to do more Red X work in consequence. However I expect she’ll be able to manage it someday. I’m very anxious to hear what job Topher has managed to get, whether he got gunners or tanks. Really awfully good of Genl: Robertson to take such an interest in him.

Ben told me Romer had been wounded & she saw him one day in town I believe. I hear he’s not bad, though still on crutches- You say you had 2 letters from me one day, 11th Sept, so glad they arrived safely- one was written in hospital, & one just after I came out. Thanks most awfully for writing to the matron & sending her a parcel, I know she will appreciate it so. Certainly the things you put in sound most alluring & I think you couldn’t have chosen better. Lucky getting that bit of sandal wood soap!

There is another excellent article in the “Field” of ? (I’ll look it up in the mess & tell you later) on the I.A. in France, & it has some nice things to say about us. So if you can get a copy anywhere, as I think it will interest you- I had a line from Jim a day or two ago, & he tells me he expects to be sent out here soon, but has to go to India first. I wonder if we shall meet! Specs still exempted! Disgraceful I call it. Surely he can hold a gun straight in a trench, or do something to finish the war-

You seem to have had another letter from me on 13th Sept: are’nt the mails erratic these days. I have’nt had a parcel from you for sometime now. There must be 2 on the way I fancy, but parcel mails, once they are landed out here, are very erratic as transport is so scarce & parcel mails are the last things they send up. Our letter mails are really wonderfully good.

I can’t remember Jerreland at the R.M.C somehow. I wrote & told Nell she could put our engagement in the paper if she liked. Several people have seen Paul’s, & asked if it was my brother, Spens of Frimley Hall for one.

It has been awfully cold lately, right up to 10 o’clock or so every day: but today with this S.E. wind it’s quite hot again & last night was not nearly so cold as usual either.

No more news for the present: I’m very fit & well.

“The Card” is the 1917 Christmas Card for the Mesopotamia Campaign. While the verses in greetiings card are always in a genre of their own, this one is very much of it time. This, more than any other artifact we have from Ted, reminds us how much the events of 1914-1918  shaped the world we live in now with its mentions of Basrah, Ramadi and Baghdad. 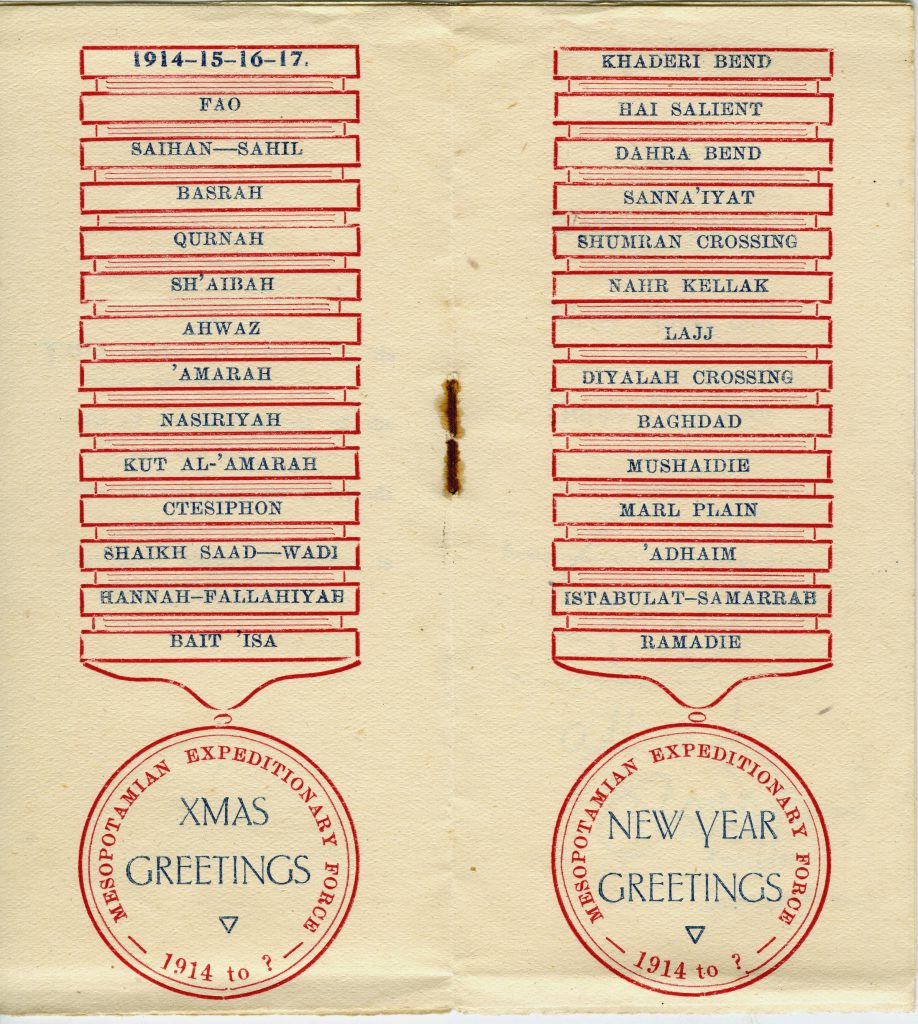 The Christmas 1917 card from the Mesopotamia Campaign – listing the battles 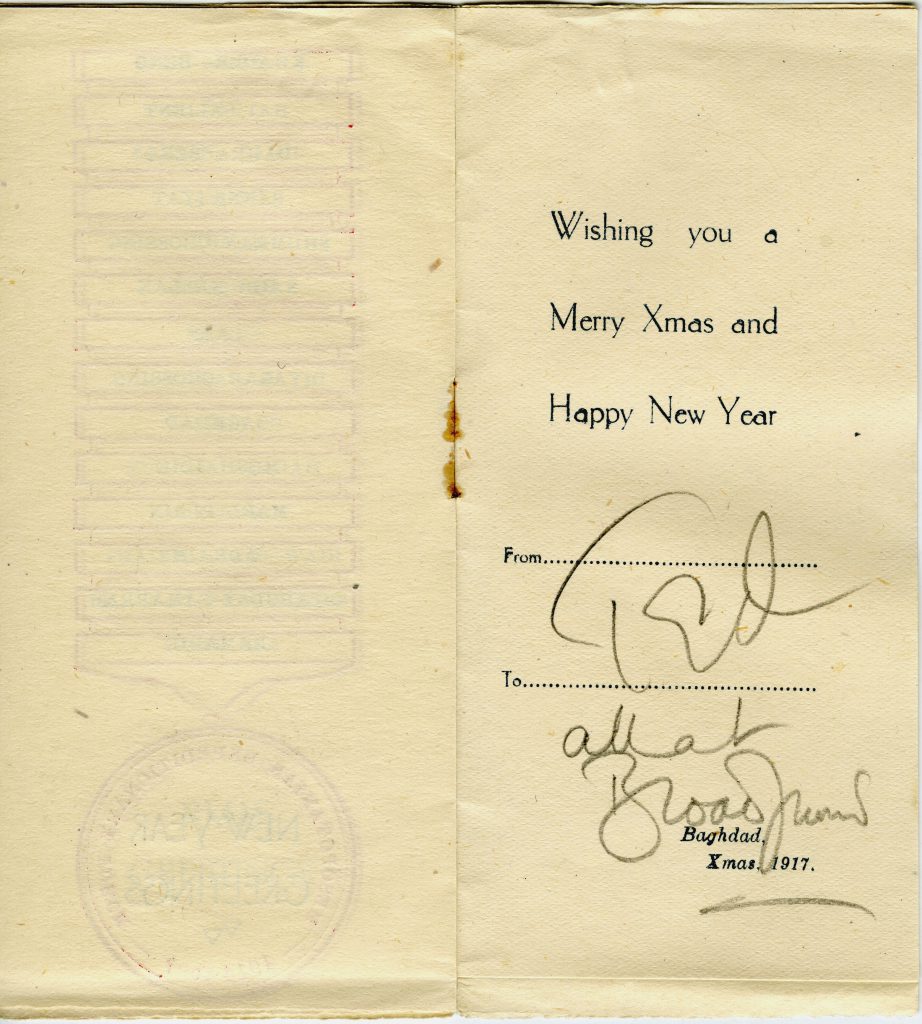 The Christmas 1917 card from the Mesopotamia Campaign – greetings from Ted 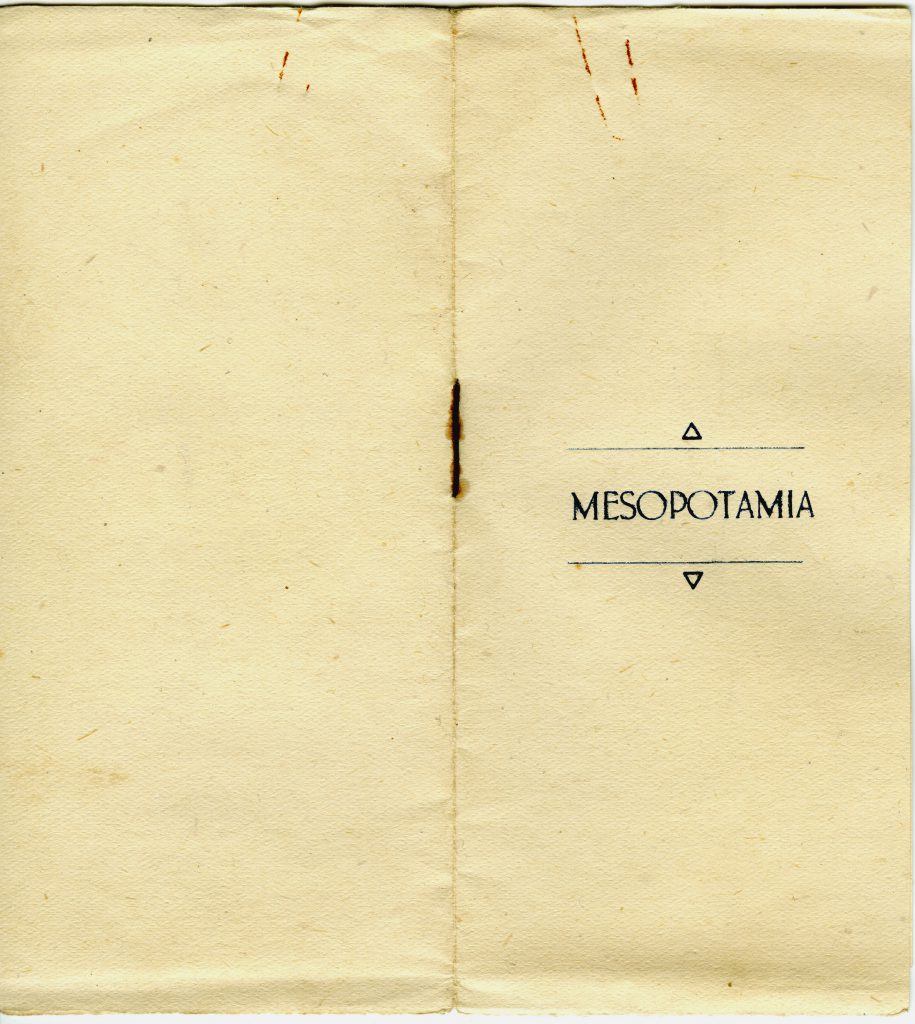 The Christmas 1917 card from the Mesopotamia Campaign 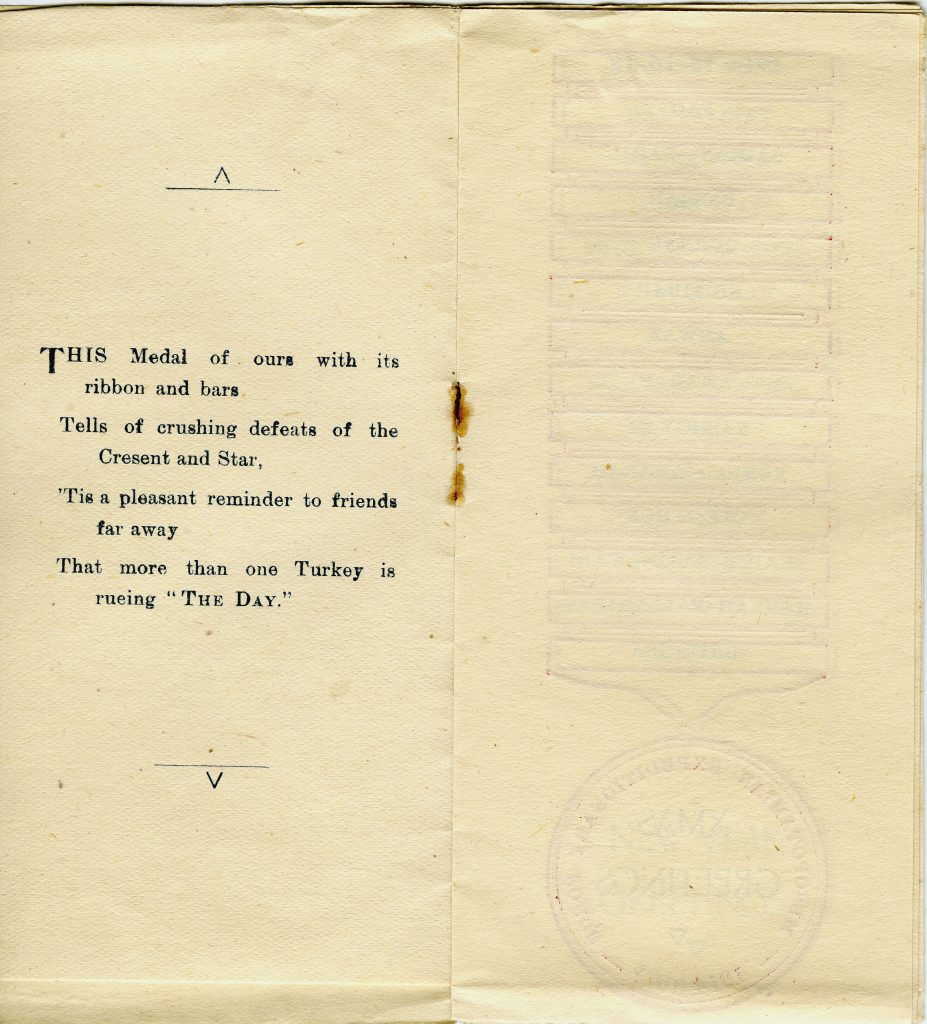 The Christmas 1917 card from the Mesopotamia Campaign

THIS medal of ours with its ribbon and bars
Tells of crushing defeats of the Crescent and Star,
‘Tis a pleasant reminder to friends far away
That more than one Turkey is rueing “The Day”.

Posted by Ted Berryman on 7 November, '17 in About, dentist, Ramadi