Thanks most awfully for your topping long letter today, also the Royal and the Watch on the Rhine. Heaven knows if I’ll ever get a chance to sing it, but you never know & it would be awful fun to sing it at a Tommy’s concert if occasion offered, & it’s a sort of song that would “go down” like anything.

My dear what a rag you must have had that Sunday, I simply roared when I read your description of it; it must have been too truly funny for words; I should imagine the lawn is ruined for ever!

Ripping Dick having a nice little car, I suppose you all make yourselves awfully nice to him now. The hair wash has’nt turned up yet, but will tomorrow I expect. Many thanks anyhow. Talking of hair wash, I’m glad you liked the photographs; but like a first class fool I sent the explanation to Ben, who must be wondering what on earth it is, as I only put the numbers of the photographs & what they were. But I expect you’ve fixed it up by now & have found out what they all are. Very good I call them; I took a picture of an aeroplane right low down yesterday so I expect that’s sure to come out.

Miserable day today wet & rain, same like yesterday. Today I have been up to the trenches opposite Neuve Chapelle, mud everywhere, you wade in knee deep liquid pea soup for yards & yards, fall over, plaster your face with mud, sit in it, lie in it, wash in it, & generally live in it all round. Some bits of the trench are really quite dry & paved with boards & bricks, like a real street, but some are real jam. I wore my ‘scutum & it looks old enough now in all conscience, & keeps the wet out and the fug in, which is after all what it’s supposed to do. I am now writing this in a perishing barn which I use as an office. I believe we shift out of here tomorrow, so our little so called rest is over.

Alice is very fit, thanks, & full of life. Some former friend of hers brought her a lovely English Doll yesterday so she is fearfully pleased with life.

Why should you rag me about my letters? What’s wrong with em anyhow? I know they’re dam dull nowadays but there’s nothing much going on. I will tell you some lies if you like, just to fill up. Yesterday a German aeroplane flew down on to the road where we were standing, whisked off my hat, & flew up again. Then it looped the loop & came down, & out stepped General French, disguised as the Kaiser! He gave me back my hat, & said he was sorry, but he was just having a day off and rolling round just for fun in an aeroplane he had found lying by the roadside. He asked after you all, & said the war would be over on the 7th Sunday after Trinity & then flew away again. There, isn’t that interesting-

No rotting, yours really was a nice long interesting letter, 6 pages, & so neat & well – well, damned good all round. Well, very well thank you. Is’nt that a joke or something. The latest thing to say (I saw this in London O.) when you don’t quite catch what anybody says is “snow again sonny, I did’nt quite catch yer drift.” So I shall be always saying this now: awful won’t it be.

So you are going to sing at the white City are you; that’s good. I shall look out in the papers for an account of the concert. Your concerts are always a great success my dear; I wish I could be home to help you pull up the curtain or sell programmes or something-

By the way, talking of Cicely, what about never meeting her when I was at home, under the clock in High St a 3 o’clock on Tuesday 12 Jan 1915? Did you ever apologise & explain? Please give her my best love when you see her; I do wish I could have seen her as I hear she’s awfully sweet, & now Dick’s cutting me out.

Had a long letter from Rosamond yesterday, no, I mean today, so I have written a long one back to her. I hear she is awfully pretty nowadays, but then I always thought she was- I wrote to Ruth too a long time ago, I wonder if she ever got it, as I have never had any answer from her. I have been watching our six-inch guns shelling the German trenches today; they make a most appalling explosion & shake the whole place. There is also a 9 inch gun too somewhere, called “Mother” & that makes still more fuss. What on earth a 15 inch gun does I can’t imagine, I can quite understand the Dardanelles forts being blown to blazes by them. Long letter from Paul a day or two ago, he seems very cheery.

I must end up, dinner time & I must’nt be late. 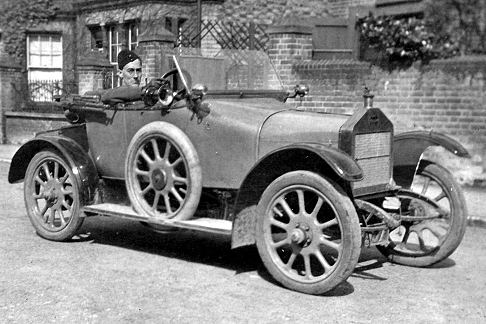 Posted by Ted Berryman on 7 March, '15 in About