Ted was Adjutant to Col Drake-Brockman whose book “With the Royal Garhwal Rifles in the Great War” tells us the names of the villages they were billeted in and something of Ted’s duties as adjutant. Here is Drake-Brockman on the subject of maintaining morale when the troops are not in the trenches. 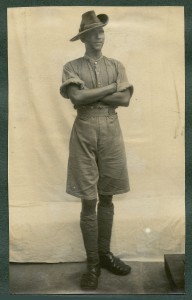 Soldier of the Garhwal Rifles (photographed in Lansdowne, India)

We left the trenches again on the evening of the 29th [January 1915]… and went back again to Vielle Chapelle. Here we did close order drill and smartening up work generally. This is most necessary, as otherwise the best men are apt to think such things as smartness and saluting are not necessary on service, which is a great mistake. Also it is most necessary in billets and in the trenches to have a strict and good arrangement just the same as in peace time in barracks, for cleaning and inspection of rifles and accoutrements every morning, else men are apt, the best of them, to get slack and neglect these most important things. In this trench warfare it occurred more than once with some units, owing to the neglect of these most obvious precautions, that the rifles got dirty and the bolt worked with difficulty, a fatal thing, as upon the rifle depended the safety of the owner. It was with this object that a bolt cover was eventually issued. Until such was issued we found that the upper part of an old, warn-out sock answered the purpose very well….

The Corps Commander visited us in our billets on 7th February. He was specially struck with the cleanliness and smart turn-out of the men, notwithstanding the poorness of the billets and the hard fatigue work they had to do every night. He said as he was leaving, “Aren’t they clean!”.

Posted by Others on 7 February, '15 in About