Very many thanks for your letter which I got yesterday dated 18th April. I hear it has been officially given out in India that from the 1st June the homeward mail will only leave once a fortnight, so I’m afraid that’ll affect letters from me too. However I expect it won’t be for long, & they will soon go back to the weekly mail.

Two days ago we moved camp, 2 miles further up the river, as they thought our other site was too crowded. You should have seen the dust on the day we moved! A strongish wind was blowing right through camp, & there was a good deal of traffic moving about, especially our transport, & it was just like a thick choking fog. There are no real roads round here of course, only desert tracks which everyone – animals, pedestrians, & transport – follows, & in consequence they are pounded into fine powdery dust, 8 or 9 inches deep, & even a man walking wll raise simply clouds of it.

Our new camp is in a palm grove, & runs down to the river bank, rather nice. We have made a sort of terrace place on the bank, with a mud wall & a hard floor, & there we sit in the cool of the evening & have dinner. Just now it is lovely, as there is a moon, & it’s ripping to sit there after dinner after the heat of the day, & watch the Tigris roll past. All day long paddle boats and all the usual vessels pass by, quite close, as the river here is only 200 yards wide. The opposite bank is lovely & green, with reeds & willows growing all along it, & it makes such a pleasant contrast to the desert this side beyond our camp. I had a bathe yesterday; very pleasant in a way, but the current is very strong, & the bottom frightfully muddy, you sink up to your knees in places which I simply hate!

We are running high temperatures now, 110° [43° Celsius] at 2 in the afternoon, & 103 [39° Celsius] or so at 6 in the evening, & then the gorgeous drop into the 80’s [26°+ Celsius] at night & early morning, a priceless blessing. We are lucky in having had a breeze, or rather a wind, since we’ve been here, which does not lower the temperature much, but at least keeps the air moving.

Did I thank you for the parcel you sent? It arrived quite safely, at least it was all smashed, & came in a huge sack all by itself; I thought I had got a special mail bag all to myself! However no damage had been done, & some gorgeous things came out – acid drops, cocoa tablets, water sterilizing tablets, quinine & aspirin, and some solidified eau-de-cologne, which was rather tired when it arrived, though it retained a semblance of solidity; during the last 2 days however it has entirely given up the struggle and has reverted to its liquid state! I’m afraid those solidified things are no go in these temperatures. Anyhow the parcel was most welcome & thanks most awfully for it.

Yes the news has been odd lately, & I expect we shall hear of some more advances in the near future. Certainly the military critics in all the papers are very sanguine & I’ve never read such optimistic comments for many days. They are generally so cautious & unwilling to commit themselves, but in last week’s paper they fairly let themselves go & talked of “crushing defeats” & retreating Germans and all sorts of refreshing happenings.

Our concert went off all right on Monday; personally I think a little more “working up” was required, as a pierrot show wants a lot of that, as you well know. But all the members of the “Pip-squeaks” as we called ourselves were very lack-a-daisical & took things & rehearsals very easily, on the “it’ll be all right on the night” principle; however, the sick & wounded Tommies & Nurses at the hospital certainly laughed & cheered, & the bosses were most embarrassingly grateful at the end, so I suppose it went off all right. We are “showing” again tomorrow night at another hospital, & on Saturday at the Y.M.C.A.

I am writing at 6 a.m. nice & cool, though directly the sun gets up over the horizon he’s red hot, & stays so till he sets! I see you have started summer time again. But what a winter! Snow right up to April! The longest I hear since 1066! I am delighted to hear of Babs’ engagement, & I will certainly write. I know Jack Houghton of course well & I always thought he was such a good chap. Is’nt he in one of the Battns: of the Leicesters & was’nt he wounded in 1915? I seem to remember something about it.

Yes I saw that ghastly description of the Germans melting down their dead, & it makes the most ghastly reading I think; how uncouth & ghoulish it all sounds, it seems hopeless to consider such people as rulers of this fair earth; however they won’t be so it does’nt matter much. I wonder what their next outrage against humanity will be; cannibalism or something equally repulsive, for really one can believe anything after reading their latest horrors.

So sorry to hear about Mrs Fox. But you told me last week I think that she was very ill.

No more for the present

Best love to all-

I added these images to this letter because I thought they might be the camp by the palm grove. When I checked the original album, I noticed that they are captioned, though not in Ted’s writing, and were probably taken in Egypt early in 1916 not in Mespot in 1917. I am annoyed with myself and have now updated the captions. I should go back and add the pictures to the relevant letters from 1916. 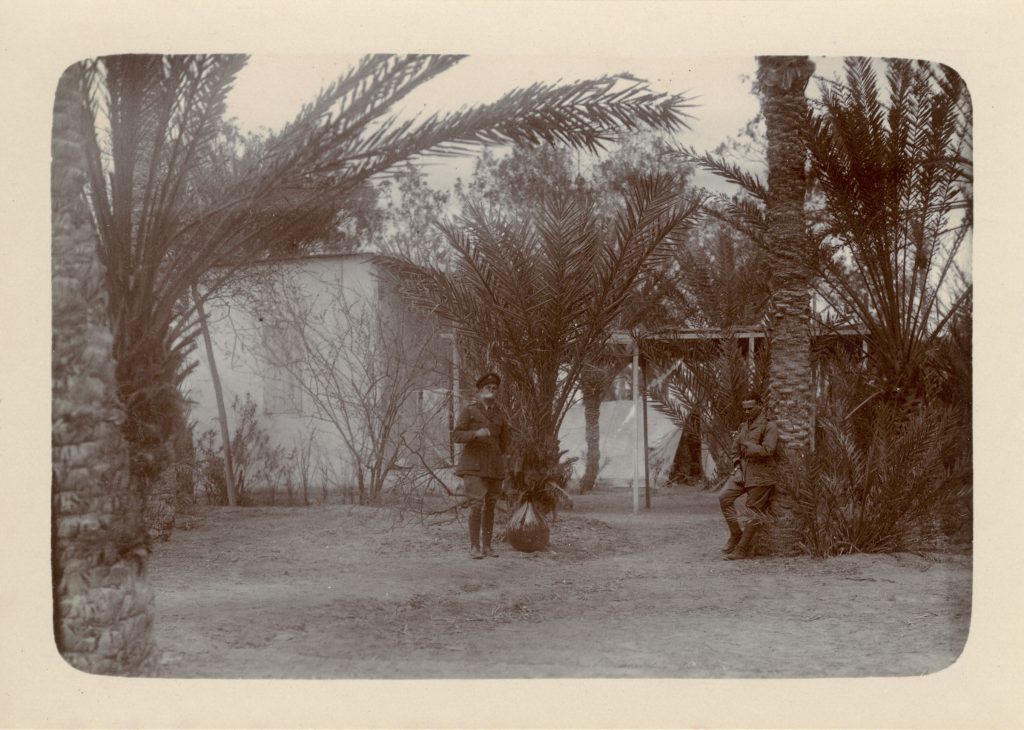 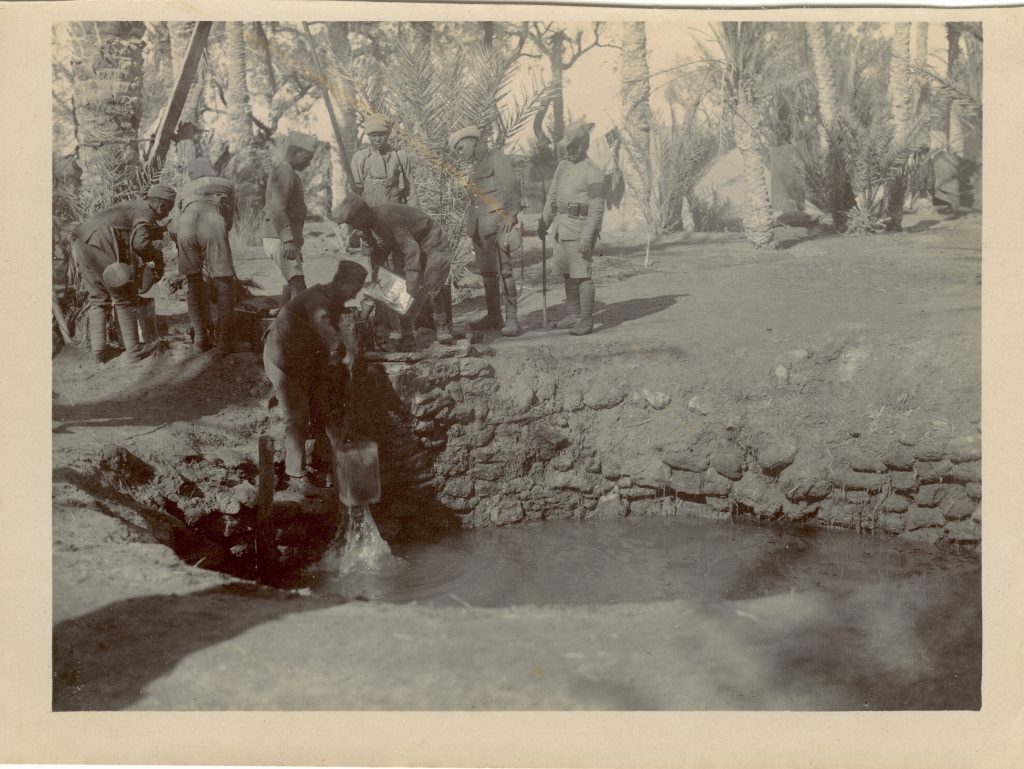