My dear girls, the letter from which I have extracted this paper is dated Nov 12th!! Would you say a long tirne answering it. Awful sorry really, but these dam Germans keep one on the go pretty well, & I have little time for correspondence. Since Nov 12 we’ve been knocking around, helping another Brigade out of a mess it got into, had 3 days rest (so called) and are now out in the trenches again.

Yes it was cold about 20th Nov but it thawed about 24th, & it’s been better since then, but all the same it is cold in the trenches. And we have’nt got our thick khaki yet, at least I believe it arrived yesterday, but we had to come out to these trenches & had’nt time to issue it, so we shan’t get it for at least a week, as they will probably keep us a week here. We spent 3 days & nights in some awful trenches, where there had been a lot of fighting for 2 days, & you never saw such a mess.

All the corpses had been buried – or ½ buried – in the trench itself, & the whole place was a mass of abandoned German kit, rifles, bayonets, haversacks, everything you could think of. You see the Germans captured the trench from some of our troops, and we sent two or three regiments to try and retake them, but suffered very heavily; they then sent for the 20th Bde to help, we were at the time marching off, after 3 weeks on end in the trenches, to rest; well they found the other 3 rgts of the Bde, but not us, so we never went; I wish we had, as it was a good show, and our 1st Bn retook the trench, captured 2 maxims & a mortar for throwing bombs, & took 100 prisoners; jolly good was’nt it; tell Ben Fred Lumb did most of it, & was in the thick of it all, & did very well I believe, & sloshed a German on the cocoanut with a rifle butt & laid him out as flat as a pancake, & shot several with his revolver. A great show, & we are all awfully bucked of course.

We went out next day & relieved them in the trench they had captured, which I say was in a beastly mess, but nothing to what it was when they captured it, which they tell me was 3 deep in dead & wounded. Jolly, is’nt it! Anyhow the Germans were only 100 yards off just here in a trench, & in 2 parts of our line were only 15 yards off: and if you please in another place were only 5 yards off! This sounds incredible but IS QUITE TRUE.

I’ll explain. From their trench 100 yards away they had dug a “sap”, that is a long trench running out from theirs toward ours; and from this sap they used to throw bombs into our trenches. Also when they had got into our trenches, before we drove them out again, at least our 1st Batt did, they dug long trenches linking up their trench and ours, see, called “communicating” trenches; so when our 1st Batt had ’em out of it, there were these trenches leading right into theirs! so of course we had to bung ’em up as best we could.

Again, on our left we were occupying the same trench as the Germans! They had never been turned out of a little bit on our left, which ended up in a road, so we were in the same trench divided only by about 50 yards of unoccupied trench, with our barricade one end, and the German barricade the other, each with loopholes in, & sniping at each other all day. A most extraordinary show all round, but this map will explain it better than words. 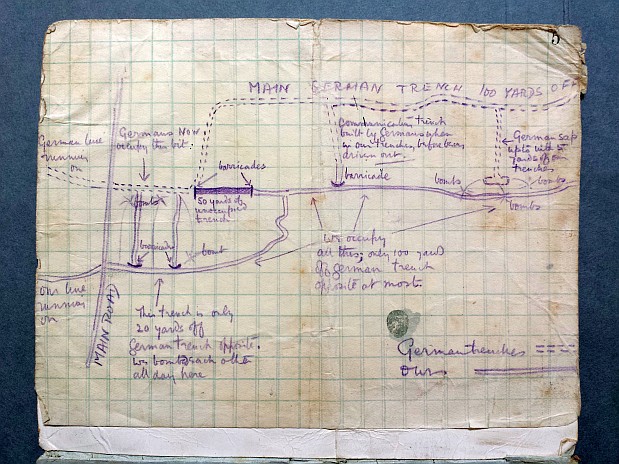 Of course we threw Bombs back at them, & did a lot of damage, I expect, but we did’nt have bombs till too late to stop them sapping up. Altogether we had a most exciting time there & were very pleased to come away.

Now we are back in our old trenches once more, for a week they say, but I expect it will be longer. Anyhow this time I’ve brought out a toothbrush & some soap, as last time they shot us into these trenches without any warning. They’re much quieter in front of us now than they were when we were here before, and barring sniping which goes on incessantly all day, & is very trying as bullets whizz about & come from most unexpected quarters, we get no rifle fire at all, at least we’ve had some today. And the only guns I’ve heard today were ours this evening when they gave the enemy’s nearer trenches a few rounds of shrapnel just for luck I suppose. Of course we have’nt had the awful time those extraordinarily brave Britishers have had at Ypres, but we’ve done a good whack; and I expect we’ll see some more before we’ve done- Well so long girls, nothing much doing here.

Tons of love from Ted

Posted by Ted Berryman on 3 December, '14 in Captain Fred Lumb