I wrote you a letter 2 or 3 days ago on board the old “P 93”, & posted it at Kut, & we have now arrived safely at our destination and are quite settled down in camp. We had no startling adventures on the way but it has been quite an interesting journey. We reached Kut about 7.30 one morning & started unloading the ship at once, so as to make the best use of the cool hours. We stayed on board after that till the evening, when a train came along & we loaded that up with all our kit & stuff, a long job, as shifting a big camp, tents and all, is a big business. We have to cart tons of heavy stuff about with us, which of course we should not take on active operations.

I did’nt see much of Kut itself. To begin with we anchored about 2 miles below the town, where a sort of new Kut has sprung up, consisting of dumps of stores & depots and a hundred & one things necessary for an advanced base. The railway ends – or begins – here too, so in the short time between getting in by ship & going off by train there is’nt much opportunity for sight seeing. It was a frightfully hot day too, much too hot to move about unnecessarily between 8 & 5. I met one Bunbury there, a pal of mine, whom I last saw in Basrah, & he has a job in Kut now. I had tea with him & after tea we strolled up the river bank towards Kut just to have a look round.

There is really very little to see. A jumble of broken down trenches, which might be ours or the Turks, it’s impossible to tell which. Barbed wire, bones, & dud shells here & there testify to something having happened round about here, but otherwise the place must be rapidly assuming its former aspect. You see we captured Kut once, & then the Turks got it, & then we got it again, so the whole countryside is seamed & scarred with trenches belonging to both sides.

The town itself – an ordinary fairly large mud-built town – was rather knocked about, but has since been considerably repaired so there is nothing much to see there. We got within a mile of it but had no time to go further. It stands out very clear & plainly in a bend of the river, & it is curious that such an unimportant and small town should gain such world fame, is’nt it? For it is quite an insignificant place really & but for the war would I suppose have remained so.

There is one rather interesting thing there, on the river bank, about a mile below the town, the Germans built a sort of column of Victory or it may have been built by the Turks in memory of those who fell, both British & Turkish, in the siege of Kut. I have heard both explanations, at any rate it is an obelisk, shaped something like Cleopatra’s needle, & surrounded by a wall. It has no inscriptions on it, but at its base are 2 guns captured from the British at the siege. It is in bad repair, & will not survive long, as it is only made of inferior bricks & mud; but it is a curiosity in its way, & we have made no attempt to keep it in repair or to destroy it. Close by are the graves of several Turkish officers.

We left by train about 9 pm travelling in open trucks. It was a jolly journey, as the line was hurriedly & none too smoothly laid. And lying on the hard floor of a truck you feel every bump and jar ten thousand times magnified. However we all slept like tops, & missed seeing the famous arch of Ctesiphon; the railway runs past it, about a mile distant. In any case I doubt if we should have seen anything as we must have passed it in the dark in the early morning. This railway was very quickly laid and it speaks volumes for the engineers in charge and their workmen.

We arrived here about 7 in the morning and marched to the camp, about 1½ miles off, & got settled in more or less by about 2 p.m. Frightfully hot it was, but we were right glad to reach our journey’s end & that kept us going. Other regiments in camp here gave us breakfast & cold drinks, while we were getting our camp ready, which was very kind of them. I have met some of the Queens; one Mudford (Mumford? or some such name) claims to know the family: also one of the Spens, I think, from Frimley, is with them, & though I have’nt met him, still he asked one of our officers if I was here & said he knew me at Camberley. Desmond Gabb is, as you say, in India & has joined the 84th Punjabis. But I have met very few of the Queens as yet, we’ve been too busy to go about much.

The camp we are in is about 2 miles below the town, & of course I have’nt had time to go in & have a look round yet, as we only arrived the day before yesterday. I have met Sam Orton, who is on the division staff, & also our own Brigadier & divisional commander have been round to see us & see how we are getting on.

A very dusty camp this, & about ½ mile from the river, so different from our river frontage at Amara! However I’m afraid our days of real good camps & such like are over now, & when we leave here we shall travel light and say goodbye to creature comforts for some months. It’s still very hot & not much breeze. September should be a trifle cooler, the nights will be nice anyhow, but oh I shall be so glad to see the last of this stinking hot weather. How I loathe it! I fail to see one single redeeming point about it. I’m looking forward to the cold weather immensely: that’s what I like, & it likes me too.

English mail goes out today, so I must post this. I see they are still on the fortnightly mail business, though they said they were going back to the weekly ones.

Images of Kut, including the obelisk

Sam Orton & Lumb mentioned in With The Indians In France 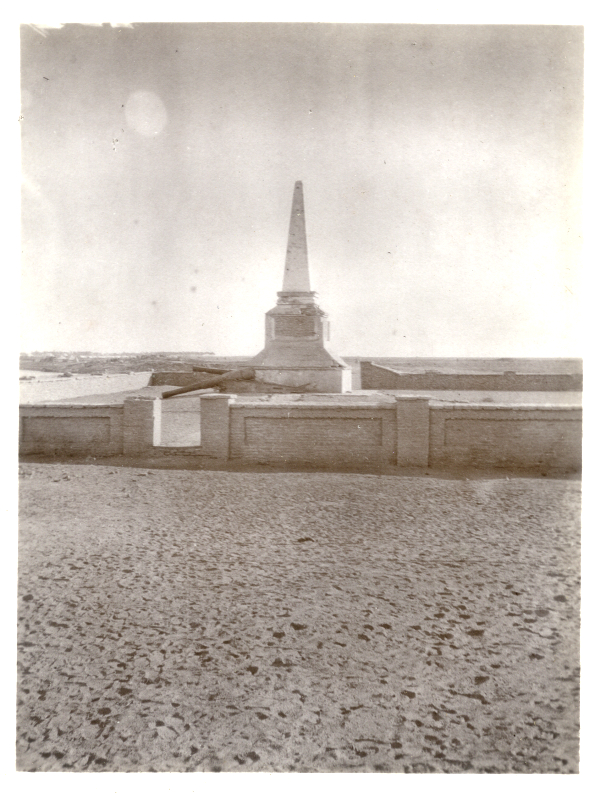 Ted’s photograph of the Obelisk at Kut