Very many thanks indeed for your two letters of May 10th & 16th which I got yesterday. Very nice of Mrs Bingley I’m sure to write to you about me; she’s awful nice, & was particularly kind to me in Delhi. I expect a letter from an independent source must mean a lot to you.

We’ve had a week of gales & dust since I last wrote. I think I must have told you that there is a special wind out here, which is supposed to blow for 40 days, commencing June or July. It serves to keep the air moving & affords considerable relief to the heat. It is known as the “Shamál” & blows from the N.W. This is generally acknowledged to be the Shamal which we have been getting lately. At times it reached almost the heights of a gale & blows with concentrated fury.

On these occasions it is accompanied by clouds of dust, which is so thick at times it is difficult to see 10 or 20 yards, but the dust is not perpetual of course, though there is always some in the air. It only gets as thick as that when it blows particularly hard, & other days the Shamal drops to a gentle breeze, and at times – today for instance – it does’nt blow at all, & up goes the temperature in consequence. Our thermometer has been showing 106° [41° Celsius] or thereabouts in our tent all this last week, dropping to 85° to 90º [29°-32° Celsius] or so at 6 p.m., & down to 79º [26° Celsius] at 5 a.m.

The temperature rises as soon as the sun gets up, & stays up till sunset. Today will be hotter I suppose as there is no breeze. I hate the dusty days, as everything gets covered in a thick layer of it, & it’s impossible to keep it out of one’s tent. Flies are not bad, nothing like as bad as they were in Basrah, thanks to good sanitation and I think it’s really too hot for them to be really lively. It’s 106º [41° Celsius] now at 11.30 a.m. & the hottest time is 2 in the afternoon, so I expect we are in for 112º or 113º [c 45° Celsius] today!

We are busy training still; work from 5 a.m. to 8 a.m., then no parades are allowed – too hot – by order till 5 p.m. So we have lectures etc in huts, & the men bathe or sleep or mend their clothes (economy, “mend everything”, make everything last twice as long as you do generally, is our watch word out here) till it’s time to parade again. They are all as keen as mustard, & it has been a tremendous pride & pleasure to me to have been in command of the Battalion now for 2 months, short as the time is. I feel I have a slight say in the matter of its training, & I am prepared to stand or fall by its behaviour in action. I may say I have absolute confidence in it; but then that is only natural. I do hope I get a chance to command it in action – it would be a great opportunity, and if only the fates are kind I think I stand a good chance of doing so.

So glad you got my letters written on board & just after we had landed. I’m afraid the latter were full of ‘first impressions’, but they are the most lasting after all & generally most accurate.  I have’nt seen Desmond Gabb yet, but I suppose we shall all foregather at Baghdad sometime or other; I believe his regiment is on its way up now, & I expect we shall be going up very shortly. Meanwhile our stay here has been most fortunate, for the weather has been none too bad, we have a nice camp, & have been more or less on our own & have had no one to worry us.

Dent tells me his mother remembers you well; he evidently wrote home about it the same mail as I did. So glad to hear Dick & Topher are flourishing. The latter must be rather tired of roughing it, & he must feel the poor old 16th being cut up very much, he must have lost so many pals.

We don’t do much else besides work here; the Gunners next door gave some sports last week, which were quite good fun. We generally have a dip in the Tigris in the cool of the evening, & I go in to Amara about once a week to have a look round. Boats of all shapes & sorts & sizes are continually passing by up stream carrying stores & reinforcements up, & if forethought & organisation can beat the Turk, well we ought to have him cold. We are taking no chance this time I fancy.

Putting up the tennis net! Shocking, war time an’ no potatoes!! I expected every mail to hear that had gone the way of all spare land and had been dug up for agricultural purposes. I must say the papers make much more fuss about it than individuals, judging from your letters & what I hear from other fellows; but it’s serious enough I should imagine chiefly because it seems almost impossible to bring the very seriousness of the situation home to people with their high wages an’ all.

However the land news is good, & I fancy we have the Hun fairly ‘coopered’ on the west now. We have been making a series of small attacks everywhere to gain high ground & important points, preparatory, presumably, to making a great big push on a very wide front sooner or later. Russia appears to be going to see us through after all, & I’m right glad to see Tino out of it & I think Greece will bow to the inevitable now & give us no more trouble.

If only we could get America’s army into the field. Well they’ll come soon enough I’ve no doubt, & it’s men men men we want, & the allies have far greater & untouched reserves to draw on than Germany, who must be wasting all her reserve strength in furious & fruitless counter attacks.

That’s what we want – to kill Bosches day & night till none are left; it’s going to finish the war quicker than anything else. Our casualty lists are sadly long as you say, but however great the price it’s worth it besides it’s the duty of this generation to posterity & the world at large. Think what future generations would say of us if we failed now. It would only mean a far greater tragedy in years to come for them.

Best love to all. Ever yr loving son    Ted

Boats of all shapes and sizes: 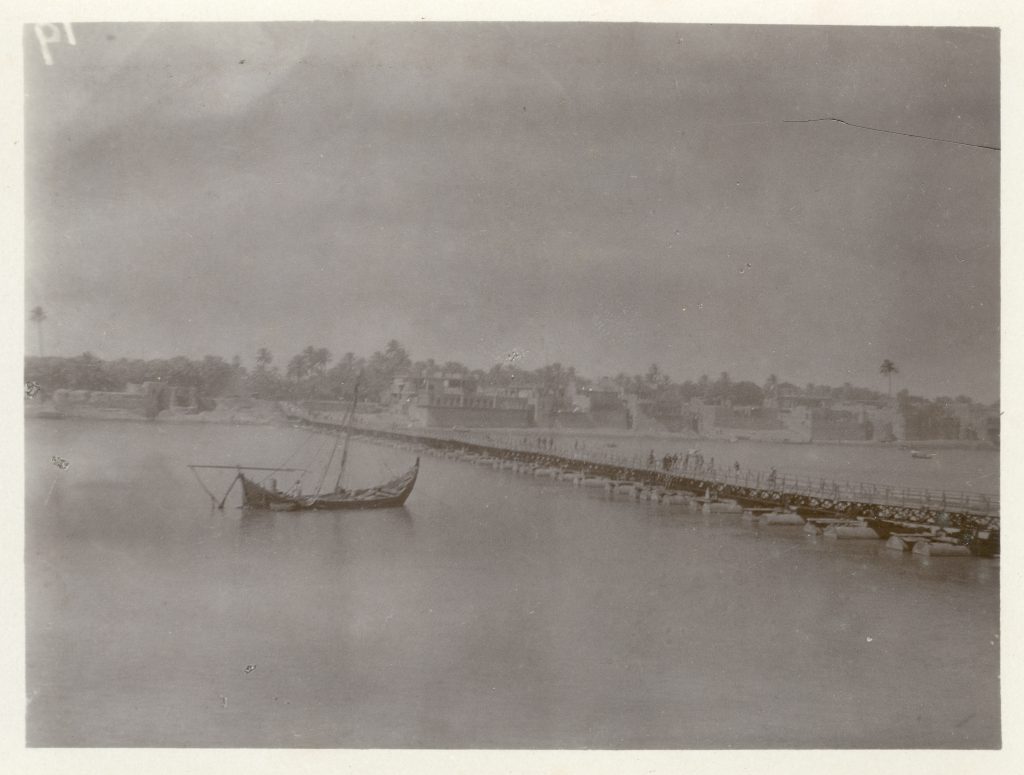 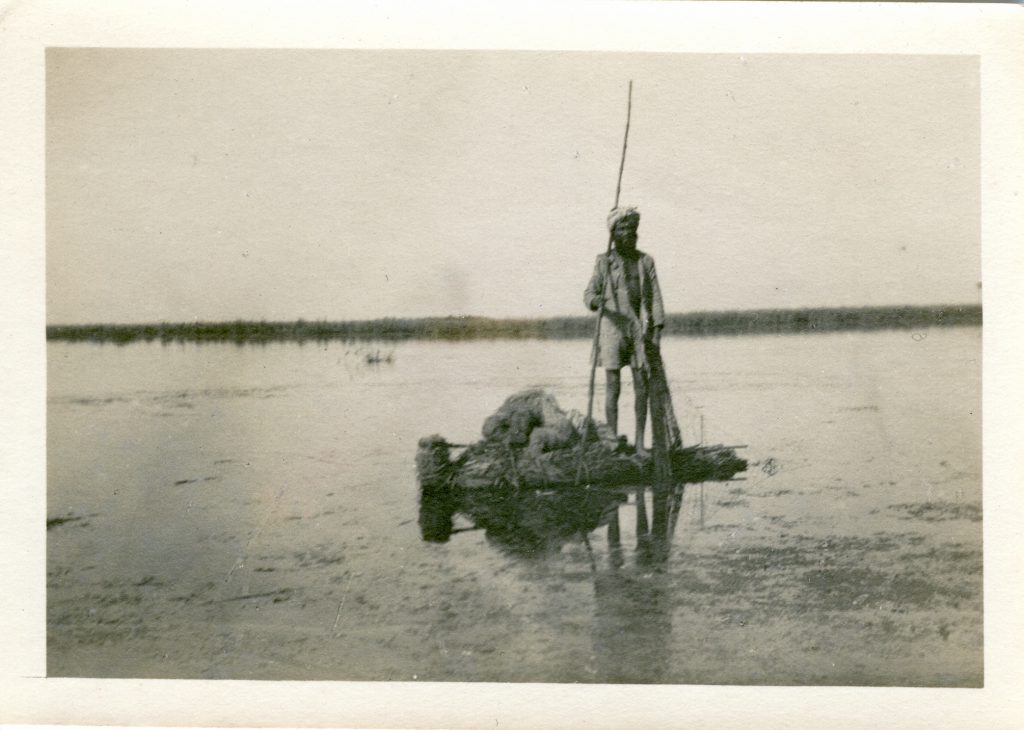 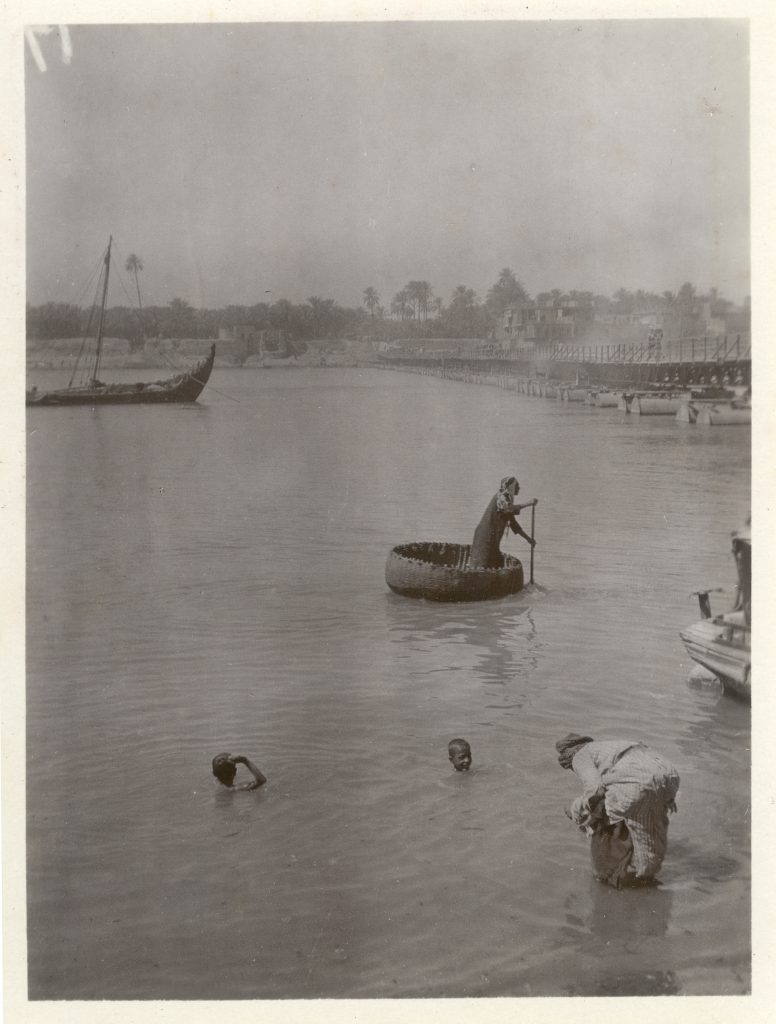 Uncaptioned, from an album taken with the Garhwal Rifles in Mespot (Iraq) in 1917