Just got another letter from you in answer to one I wrote from Marseilles. At least I wrote it on board and posted it when we landed, by the pilot. Then orders came out that all letters posted in French post offices wd be destroyed, so we fondly imagined those wd never roll up. Anyhow, I wrote to you again from camp, so I expect that’s rolled up too now. I had had lots of letters from you all since landing, including some forwarded from India, in which you say you expect I wish I was in the show! It seems so funny reading them. Also a whole lot of letters have arrived here for Ben, c/o me, so I will forward them on as soon as I can. I suppose we must stick to orders, & refer mysteriously to “this place” & “that place”, & mention no names, silly as it seems.

Anyhow, we left the last place I wrote from – give you one guess! on the 18th, & came by train here, by a most roundabout way, arriving on the 21st. The camp there was in an awful state, feet deep in mud, & we had persistent rain for 6 days. Imagine the state of our kit, and ourselves. We got orders on the morning of the 18th to entrain at 2 o’clock that night, or next morning rather. There was an awful muddle of transport, & owing to the mud, well, I never saw such a mess! To cap it all it poured in torrents from 2 to 4 & made things 50 times worse of course. However it’s all part of the days work I suppose, & we kept smiling through it all. Eventually we got the transport off, & marched off at 8 p.m. arriving at the station at 12.30. We loaded up the train, & started off at 6 a.m. next morning. We had had no sleep of course for 24 hours, & had been working hard all the time, so were of course rather tired. We had been soaked through & had got more or less dry again marching, but none of us had our clothes or boots off for more than 36 hours; this I know is nothing to what others have-been doing up at the front, or to what we shall doubtless be going through in a day or two now, but it just shows how one can be quite decently uncomfortable miles away from the war really. None of us are any the worse for our wetting, & when I did finally manage to get a change all the clothes socks etc I was wearing were quite dry!

Such fun in the train; every station crowds of people, stare stare, & shouting & waving. All the girls asking for souvenirs, & almost tearing buttons & badges off one’s uniform. However I managed to hang on to all of mine, as I could’nt spare any, though I gave away one or two odd stars – interrupted here by ten million orders etc coming in – sorry.

This letter is from that clichéd address “somewhere in France”.  According to Drake-Brockman, they had in fact arrived in Orleans on the 21st October.  Ted continued this letter on the 24th October. 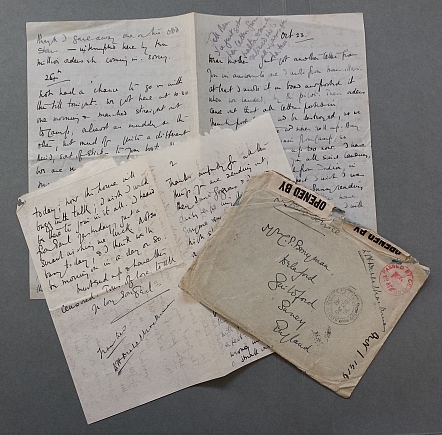 Ted’s letter had been opened by a censor after being sealed; this was unusual and was a check on how effective the censorship was rather than a check on the contents of the letter itself

Posted by Ted Berryman on 23 October, '14 in France, Orleans