I have just a few moments now to spare, even though it is nearly midnight, to write & tell you something about our doings of the last few days. You have of course seen in the papers about the successful “British advance” & the Indian Corps doings, but I fancy the accounts lack detail & are very general. The part we played was small of course, but may be interesting, as I saw it.

To begin with – we left our comfy billets at the farm suddenly at 6.45 p.m. on the 8th, got a wire saying move at once; so off we went & reached a little village soon afterwards, where we stayed the night. At 6 next morning I had to go up to the trenches to find out various things, not very exciting, & we stayed in this little village all the 9th, not doing very much.

At 6 o’clock on the 9th, we got orders to move at 1 o’clock that night, (it was freezing hard & very cold all this time) so off we went up to the trenches and awaited the dawn. Our orders were to attack the German trenches in the morning, after they had been heavily bombarded by artillery. Our regiment was only taking up a small front of course, & was but a tiny unit in the whole show, which took place over a very long bit of the line, the whole of the 1st Army being engaged; but you will understand how we only saw a small, but important bit of the whole thing. Divisions on our right & left were attacking as well.

As soon as it was light, the guns began, & my goodness, there never was such a row! Every conceivable gun in the Corps concentrated its fire on the front to be attacked by the Brigade, our Brigade that is, the Garhwal Bde (rather an honour to be chosen out of the whole Indian Army Corps to do the attack) and for half an hour they bombarded the German trenches. Lyddite, shrapnel, small guns, big guns, howitzers, field, horses & siege guns, all banging away as hard as they could.

We were only about 150 yards from the German trenches, so we got the double benefit of hearing the sound of the discharge, & the explosion of the shell too. Enormous shells burst in their trenches, poor devils, throwing up huge columns of yellow smoke, & heaving up trenches, dug out trees, hedges, everything that came in their way.

Precisely at a time previously settled the guns “lengthened their fuse” as the saying is, that is they fired at the trenches and houses beyond the front trenches, so as to prevent supports etc coming up. And at that same moment our men jumped out of our trenches & charged across the open. It was splendid, & the men were into the first line of trenches before you could wink. They went on and rounded up the next trench behind that, but met with some resistance here, but overcame it & captured the trench.

In all there were 4 lines of trenches, & they finally reached & captured the 4th line. In doing so they had captured 180 prisoners & 3 machine guns & we had about 100 men killed & wounded.

Alas! I was not in the charge, being Adjutant I had to keep up with the Colonel, who went up with the last line. However it was all very exciting, & a splendid sight to watch. Well having captured the 4th line of trenches, there, straight in front, was Neuve Chapelle; & nothing would stop the men, the officers there say they had the greatest difficulty stopping them, & on the whole Brigade rushed into & through Neuve Chapelle & out the other side, where they took up a line of entrenchments in front of the village.

We all hurried on, there were bullets & shells flying about, but we managed to dig ourselves in, & found a whole lot of German sandbags & entrenching tools which were very useful. Perhaps this map will help a bit. 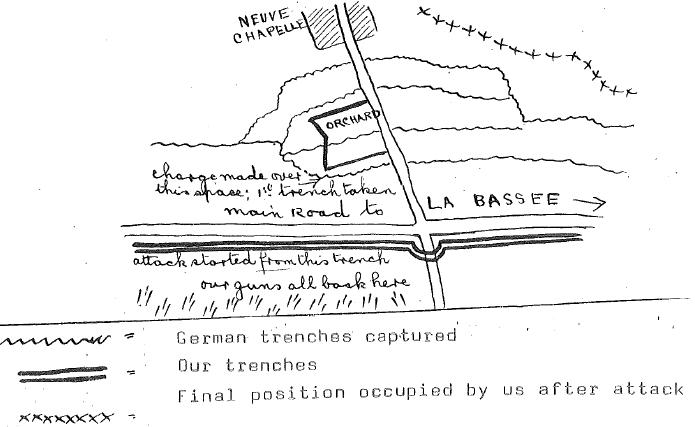 Well we stayed there digging all day, & they fired maxims etc at us, & caused several casualties; they also shelled us a good deal, but by evening we had quite good cover.

Late that night we got orders to go down & help the right flank, but owing to the darkness & perfect maze of trenches (you must remember we were in the German lines now, at least in the lines captured from the Germans that morning, so we didn’t know our way about much) and the guide who lost his way, we were ordered back.

We spent the whole night trekking about, & then at 6 o’clock next morning got orders to be attached to another Bde to help them in an attack at 7 a.m. So off we went again, trekking off into the unknown, & finally reached our position just at dawn, with an awful prospect before us, an attack over quite 800 yards of absolutely open country.

We lay out there in readiness to move when the attack began, being fired at the whole time, & getting several men hit, but for some reason or other thank goodness the attack was postponed, & we got into some very bad trenches there with the Leicester Regt. Had we done that attack we should have been very badly mauled, as the ground was absolutely open, & the Germans were well entrenched against us.

Well all that day we lay there, tired & no food (no one knew where we had got to, in the muddle); but we got some fun watching our guns shell a wood in front of us, & by gore they did  knock it about. We saw the Germans simply scuttling for cover when our high explosive shells got on to them.

Late that night 12 midnight, we were told to go back to billets, so we marched back, very tired & hungry, & reached them at 4 a.m. At 5 we got orders to move to more billets further back at 7 a.m. So we moved off & had of course no sleep that night. Well we marched at 7, reaching billets at 12, & settled down we thought for a day or two’s rest. But at 4.30 that evening we got orders to go back at once, to stay in reserve up near the firing line. So we trekked off again, the men utterly fagged, for we had no sleep for 3 nights, but we managed to get there, & found rotten billets, & could get no food. However I got some tea off a tommy & went to bed (?) about 1 a.m. absolutely cooked.

Nothing happened and we stayed there next day till 5.pm. & then marched back to here, arriving at 11pm.; that was on the 13th as we are still here.

The Brigade did splendidly, and got no end of praise from everyone, & the regiment has received heaps of congratulations on the good work done in capturing Neuve Chapelle, or helping to do so, for really the 2/3 Gurkhas & Berkshires had a hand in it too.

Our poor 1st Bri. got a very bad time; they got off the track a bit in their attack & lost very heavily. Seven officers were killed that day & 2 wounded; only 3 of the Bgde were killed, Kenny, Welchman, & Sparrow, other Col. was wounded; the other 4 were fellows attached. In the 2nd Bri. we were very lucky, as we had no officers touched, though we had 150 men hit in the 3 days. I’m most awfully sorry, we all are, about those 3 fellows, whom one knew so well, it’s so hard to believe they are dead; & the other 4 whom I only knew really by sight, as they were only attached to fill up vacancies caused by Lumb & Lane being on the sick list. Terrible is’nt it; but they were soldiers, & it was a soldier’s death anyhow.

But our 1st Bri did wonders next day; after having all those officers killed, they were heavily attacked & shelled all day, but they never broke, though they suffered terrible losses, they fought like fiends & earned absolutely undying fame, really they did; everyone says so, & our Divisional General told us this morning that the name of [censored?] was famous for all time. Our men are really splendid, & 1st class fighters & soldiers, & I am frightfully proud of belonging to such a magnificent regiment.

And poor dear Major Mac! He’s gone too, the very nicest man that ever stepped; one of nature’s gentlemen, & a perfect example of courtliness. He went in to command the 1st Bri. on the 10th after their Colonel was wounded, & was killed on the 12th by a chance bullet. I was so fond of him, & he was always a perfect dear to me. I don’t know what the regiment will do without him, he always seemed essential to its welfare, & it is hard to imagine the 39th with no Major Mac; it has taken away a lot of the joy of victory. I would give anything to get him back.

We buried him & Kenny in a little churchyard close here; I was so glad they buried him there, & that I was able to go to his funeral; I was at least able to pay my last respects to a very dear friend. All gone now, 7 good men in the 1st Bri. & 1 in the 2nd Bri, all given their lives for their country.

Everyone has been loud in their praises of the conduct of the two battalions in the fighting, but I would rather they said nothing if only we could get those good fellows back again.

Well it can’t be helped. I have tried to describe to you this small part we took. It was all very exciting, & after it was all over we were all absolutely done, tired was’nt the word. We had been constantly on the move for three days & nights, food had been erratic, & sleep out of the question. But for all that, the men were cheery & hopeful, & you couldn’t want better soldiers. I am frightfully busy now fixing up all the muddle inevitable after a show like this, & am still very sleepy & tired, as I have’nt had much time to rest yet.

I’m afraid the casualty lists will be heavy when published. We all had narrow shaves, I had a fearfully narrow one, but must tell you about it some other time, as I’m too tired to go on writing now. Goodnight Mother & I’m as right as rain & awfully fit.

Love to all   yr loving son

The original of this letter is in the Archive of the the Imperial War Museum: Private Papers of Lieutenant Colonel E R P Berryman DSO –  http://www.iwm.org.uk/collections/item/object/1030021700 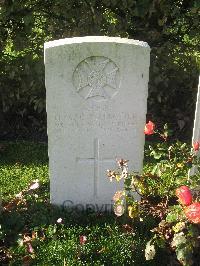 The grave of Henry MacKinnon MacTier