Very many thanks for your nice long letter today. Also an enorm parcel of anti cough & cold mixtures rolled up, a lovely lot of things. The only objection being of course that my cold has now completely gone; I cough once a day now and snivvle hardly at all. Never mind, the things are most acceptable, and I am now sitting in draughts & discarding underclothes with a view to catching a cold so as to make use of all the lovely things you sent. No rotting, the parcel is most acceptable, & will sure to come in useful if not for me then certainly for some other snuffler.

Cigarettes most welcome, as none have turned up yet from Jim’s patent man, but don’t worry as I have heaps now. C (Ben knows who C is; a man, how dull!) sent me 100 this morning, awfully nice of him I think.

No news here; we are still in reserve, but things are quietish just at present. We go up again for a bout in a fortnight soon I believe, more mud & trenches; what a life!

I am ragged about my hair nowadays my dear! They say it’s much thinner tho of course I swear it’s growing like hell, & so it is. No, my big toes are still dead, at least the top half is; never mind, does’nt matter a dam.

A simply gorgeous day today, lovely blue sky, & about 4 thousand and twelve aeroplanes up, lucky devils. One huge biplane that would carry a regiment I should think, & flying quite low. I have 2 lots of films to send you for developing, but I don’t quite know when I’ll be able to send em quite; I’ve clean forgotten what I’ve taken!!

F.F’s with the Davids indeed. Well, give my love to them all, especially Babs who was a great friend of mine- I shall want another bottle of hair wash I expect. I enclose £1 for Ben for those watches she got me. Please give it to her, & say I’ll write soon. Long letter form Mary today, please thank her for it orfly,  & say I’m writing as soon as I find time.

Been for a walk with Major Mac today, just strolling round enjoying the ripping weather. But you should have seen the last 2 days, howling wind & sleet and bitterly cold. Had a bath yesterday in a beer vat, & am feeling awful clean today.

Such a dull letter this is’nt it, but we are’nt doing much. Some of the aeroplanes were fired at today, awful pretty, but those high explosive shells make the most appalling noise in the air, & bits of em come careering about all over the place. They say the aviators themselves can’t hear the bang because the propeller makes such a noise; they certainly behave as if nothing was happening, & take not the slightest notice of shells or anything else.

Here’s a true yarn; a Saxon regiment a day or two ago just opposite some regiment or other, I don’t know which, kept on shouting out & yelling, & finally climbed out of their trenches & baleing water out. Our chaps didn’t fire, much too cold-blooded a job, but told ‘em to clear off or they would fire. However the Saxons said no, they wanted to be friendly etc etc & loathed war etc etc.

Finally the General commanding that brigade came down, went over to the Saxons, & said look here, I’ll give you 6 hours to dig yourself some more trenches, as your present ones are flooded, & after that I’ll have to open fire on any one outside”. So the jolly old Saxons started digging like blazes & got some sort of cover in the six hours & disappeared behind it; & as the 6 hours was up, they hoisted a huge notice board up in their trenches with this written on it “Don’t shoot us & we won’t shoot you; keep your bullets for the blankety blank Prussians, who relieve us tonight”.

That’s an absolutely true yarn, I had heard rumours of it before, & last night I got it from a feller who was there and saw it all.

Is’nt it weird, of course those were Saxons who F.F’d with us on Christmas day, & they are really quite good chaps, & it’s the pure Prussian who is such a blighter.

FF was family slang for a Fast Friendship, one that wouldn’t necessarily last but which was brought about by circumstances such as a sea voyage.

The Saxons story was picked up by the papers: 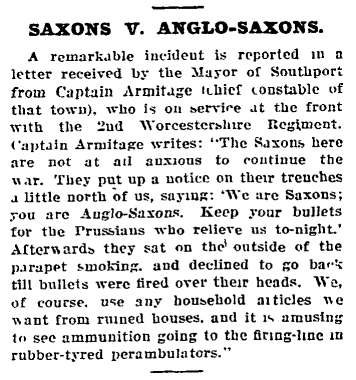 Posted by Ted Berryman on 16 February, '15 in About