I got the mail letters from you this mail, somehow or other you must have missed the mail last week. Your letters are dated 24th & 31st August, and very many thanks for them.

I don’t think I have very much to tell you. I went out for a week end, just Saturday & Sunday, with Guy Mainwaring to try & get a few hill partridge, but it was a rotten sort of wet day & we only got 3 birds. However we had a lot of top hole walking & climbing & exercise generally, a pleaasant change from the ordinary routine of this place. The rains seem to be giving one final ducking before they stop, for really the last two days have been quite impossible; incessant rain and it’s getting quite cold too. My cold bath of a morning is really cold nowadays; it’s generally quite luke warm up here in the summer.

Did I tell you we are under orders for Delhi this cold weather? Anyway, we are; as we’ve been finding the Viceroy’s escort all the summer at Simla, it follows on a natural course that we should go as a regiment to Delhi when he moves to Delhi for the winter. There will be other troops there of course, but we shall be the sort of specials. In ordinary times it’s rather nice, lots to do there and a centre of gaiety of course; but I don’t know that I’m a bit keen to go just now; for one thing it’s sure to be expensive living there, and I’d much rather not go with the regiment as it is now, so many pals gone. However, I expect it will be all right when we get there. I believe we are going on manoeuvres for a week or two first, & then go to Delhi, but I have no idea of dates etc.

I had a long letter from Ben this mail at Seaview; I wonder if she has been able to settle down to anything yet. I also had a short note from Jim, saying he was to be married on the 9th, & I saw the notice in the weekly times too. He seems to have done things in a typically erratic way as usual, & made up his mind on the spurs of various moments. Poor old Jane, I hope she managed to find someone to do her job, or else was unable to shut up the shop for a bit so as she could get away for her holiday.

For all his cables & hurried orders I believe Dick only left on the 18th after all; he wired me on the 14 August that he was off next day, but I heard several times from him in Bombay, & I believe he really did sail on the 18th of this month. You will have heard by now of course what his orders are more or less, & I suppose he’s going to join a field ambulance, probably a cavalry one, with the Indian cavalry, or he may be going to an Indian cavalry regiment as doctor. So glad to get good news of Topher; yes, he’s bound to be popular & I expect he does his job well too. I should think they’d open leave again before Christmas. Air raids I see are still the order of the day, but how splendid bringing down two in the last one; we got Reuters wire about it yesterday. We really do seem to have done something to drive off these raids at last.

Yes, Dryden told me some time ago she was sending me “Trench Yarns”, but they have’nt turned up yet. Nell seems very fit, and sent me a photograph of the bureau, & seems delighted with it. What a splendid choice Ben made. She sent me “the Eve” book, you know those weird but really clever drawings out of the Tatler.

We are supposed to be having a Battalion parade at 9.30, but unless the weather cheers up a bit I’m afraid it’ll have to be off. I must go up to the mess & have some breakfast now, off one of Sunday’s bag of partirdges.

By the way you know that Jaeger British warm I had in Gloucester, a big double breasted one, with leather buttons, light colour, belonged to someone who sent it to us? Could you send that out to me, as I want it for Delhi, unless one of the rest of the family have bagged it meantime. Jinny would know the one I mean, & I expect you all do. It’s an awful nice one, & I hope it’s still available.

Lots of love to all

from your loving son

Trench Yarns for Subalterns & Others by ‘Peter’ – middle left

Ted is probably wearing his British Warm in the photograph below. 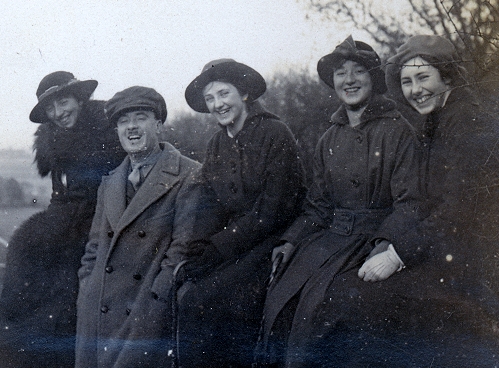 Posted by Ted Berryman on 1 October, '16 in About