Very many thanks for 2 letters from you which arrived 2 days ago, dated 10th & 17th of October. In the 10th one you had’nt heard from me for some days & the 17th one was in answer to some of mine written just before we left Amara & on the boat up to Baghdad. I’m so glad you liked them, & the journey is well worth describing – one is apt to forget that scenes & sights & incidents which seem trivial to us maybe of great interest to you, so I always try & tell you as much as possible.

It has been very cold here lately, due to a biting NW wind which nothing will keep out. It seems to cut through all one’s clothes, & as we only have thin khaki drill you can imagine it’s a bit parky. I have found that Shetland woolly most frightfully useful, I simply don’t know what I should have done without it. The nights of course are very cold indeed, down to 40° sometimes, & it’s never above 80° in the shade by day now. So you see we are indeed subjected to extremes in this weird & wonderful land. However we are getting some warm clothing from Government soon I hope, so that’s all right. And by the time I get an answer to this letter it will be February, wet & horrid, & a month later that infernal hot weather will begin again. But we are all very happy & thrive on this open air treatment; personally I feel and am particularly fit & well.

Today a plum pudding arrived from you, so we are all right for Christmas in that direction anyhow. Our trouble is a Turkey (one is tempted to pun here, but I will refrain!) or a goose, but there appear to be none to be had. Thanks awfully for the pudding, you’ll be glad to hear of its safe arrival I know.

Life is strenuous for us – at least for the men – these days. Dig dig dig all day, but last week we were lucky & went out on a 4 days reconnaissance about 15 miles up the river. “Berryman’s column” it was called, & we had cavalry, infantry, & guns in it, & I was put in command; I rather think I referred to this krewst in my last letter. Anyway we had quite a nice 4 days out; ooo it was cold, no tents & this old wind blowing the whole time.

We came across some Turks one day & they fired a few shots at us, but did no harm. But it was a good training for us all, as we were in hostile country & never knew what might’nt turn up. And it was a very pleasant change too from our life of late, cooped up inside barbed wire an’ all here-

Lyell has’nt joined yet. Yesterday I got a wire asking me to inform him of his wife’s death in Lansdowne. Did you ever hear of anything so tragic? She has just had a son, but from all accounts was going on well. Poor Lyell had to leave Lansdowne a week before the child was born, so perhaps the worry of it all killed her poor woman. I don’t know what Dolly Lyell will do now; I believe he was devoted to her, & it will be such an awful shock to him poor man. I have wired the sad news to him to try & catch him at Baghdad before he arrives here, I think it’s better he should know as soon as possible rather than wait till he gets here.

Jack Hogg is on his way up from Basra too to take over command, but he won’t be up here for a week or two yet.

Topher seems to have had a good leave, I’m so glad he managed to get it at last. News is on the whole good, for I have long since ceased to regard Russia as a country at all, as the Italians seem to have rallied somewhat. Then our big breakthrough on a 10 mile front on the Hindenburg line is awful good news, the tanks seem to have done well there.

Everyone is very optimistic it seems about submarines & air reprisals, & I do hope they start soon, though this is possibly not quite the season for them.

Really Babs Davids being married seems very hard to believe, they both are so absurdly young. As you say it must be hard to feed a sudden inrush of people for a weekend, & even your truly marvellous capacity for meeting these somewhat alarming situations must be taxed these days, but I have no doubt you still succeed in making a little go all the way & I’m sure no one leaves Delaford either hungry or sad.

Whiskey at 8/6 a bottle! My word, we pay 33/- a dozen here, but I suppose we are spoilt children. Sugar seems plentiful & we get enough; tea too, somewhat hay-like as yours is. I’m personally rather lucky, as I still have 2 pounds which Nell sent me, also enough tea tabloids to make over a hundred cups, but I am keeping all these for a rainy day when things fail.

Your second letter of 16th Oct acknowledges 3 of mine. I rather think my letters describing my first impressions of Baghdad may have been lost, as one lot about then was burnt at sea I know, but it’s just possible it may have escaped, I sincerely hope so anyway. So glad you like the links, & how wonderful their arriving safely. I must confess I never imagined they would! They are quite a good example of Amara silver work & I have one or two more odds & ends which I do not care to commit to the care of the post, but I will bring them along some old time.

Yes mother, I have had my wish of leading my men into action, & indeed they did not fail me-

You say Specs you think will be roped in at last, & all the pleadings of Col Perkins will be of no avail. Well, it’s about time, & his work can hardly be put down as one of national importance! I got a lovely box of cigars from old Fielding today, very sporting of the old man. He wrote such a nice letter in reply to my “ultimatum” about getting married next year. I wish you could manage to put in a few days there, but I know it’s difficult, but the rest of the family are all very anxious to meet you, & I’m sure you would like them all most awfully-

Dinner time- Best love to all

Enclosed shows our casualties in the scrap, underlined. I told Ben I wd enclose it in her letter, but I forgot! 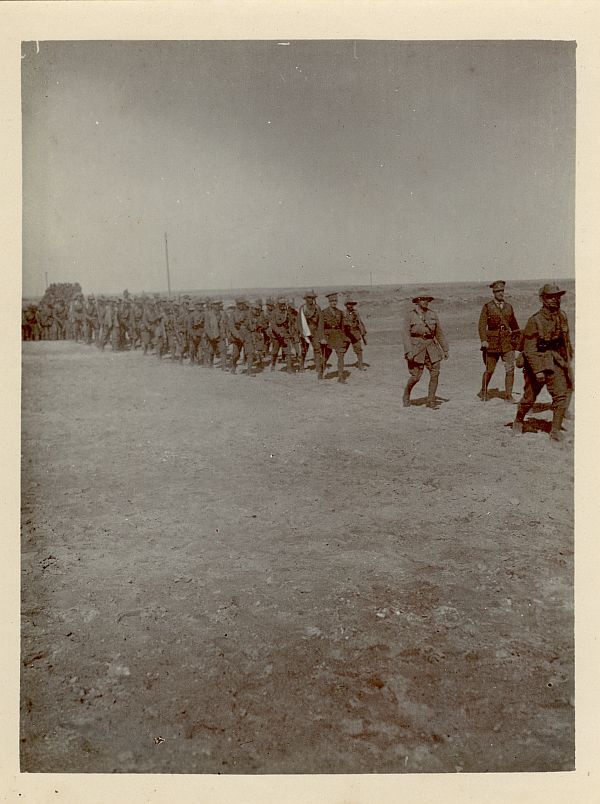 Posted by Ted Berryman on 1 December, '17 in About