About this Project: Cold pigs and the time-traveller’s paradox 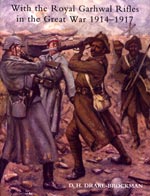 It’s surely no surprise that I am acutely aware of the Time-Traveller’s Paradox – what happens if you go back in time and shoot your own grandfather?  I keep on thinking that if a particular bullet had hit a bit higher then my grandparents would never have met, my mother would not have been born, and neither I nor my siblings would be here today. It’s something we all know, of course, but it’s odd to think about so much. Some years ago I was in a building which had a mirrored floor and ceiling so you appeared to stand on top of an infinite precipice. Thinking about this feels a little like that.

In other news, I have bought a copy of the regimental history of the war, written by my grandfather’s commanding officer, D H Drake-Brockman.  It’s fascinating.  Writing after the war, Drake-Brockman has the time and the leisure for descriptions.

I kept our Battalion headquarters in the vicinity of the ruined farm in a sort of dugout. In reality it was one of those brick pits in which they store beetroots. [Oh, yes, of course, one of those brick pits]. … The farm house, or what remained of it, formed a too conspicuous object, and though the dug-out was shallow, it did us for the time very well. The cellar in the house had evidently been occupied by the headquarters signallers of the relieved regiment, and apparently a heavy howitzer had made a direct hit, for the walls were covered with the poor fellows’ brains and blood. There were still the owner’s cows and other live stock at the farm roaming about the ruins. The owner turned out to be a woman, who came daily to feed them. I had to get our interpreter to tell her to take them away and not come up again as the farm was only about 80 yards from the front line. One of her fine cows was lying dead in the stall, killed by a shell. She took the cows away at night, but left the pigs, which roamed about disconsolately. Eventually they were all killed one by one by shell and rifle fire. At night, even when it was bitterly cold and a heavy frost on, the pigs were happy as long as their snouts were covered up. They poked them under the straw at the bottom of a stack in the yard. they did not mind their bodies being exposed to the frost and cold!

Posted by Family Letters on 28 September, '13 in About, Col Drake Brockman

About this Project: The proof of the pudding

It’s less than a year until the centenary of the start of WWI, and ten months until the first of the letters is scheduled for publication on the 6th July.  The last 10 months have been busy for me, but it’s time to pick this project up again.

A friend of mine has agreed to proof-read the letters for me. His name is Chris Miller and, appropriately for this project, he is the great-great-nephew of the Winslow Boy who was killed at Ypres on the 31st October 1914 aged 19.  If you want proof-reading done, just drop Chris a line.  His work is sorely needed on this project.

The OCR software I’m using is Abbyy FineReader and it’s fussy.  Like all powerful software you have to know how to configure it in order to get the best out of it.

The three screenshots below show just what a difference it made when I managed to re-tune the settings in the OCR software.  Here is one of the original letters, typed in a crazy 1970s typeface. 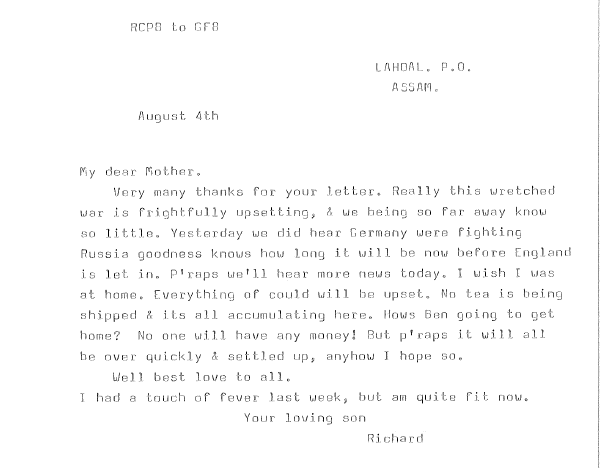 Here is the Word version with the software sorting stuff out automatically. I’ve set MS Word to show a dot wherever there is a wordspace, to bring out just how impossible the results are.  As you can see it reads My dear Mother as M y d e a r M o t b c r.  With results this bad, retyping looked like the only option. 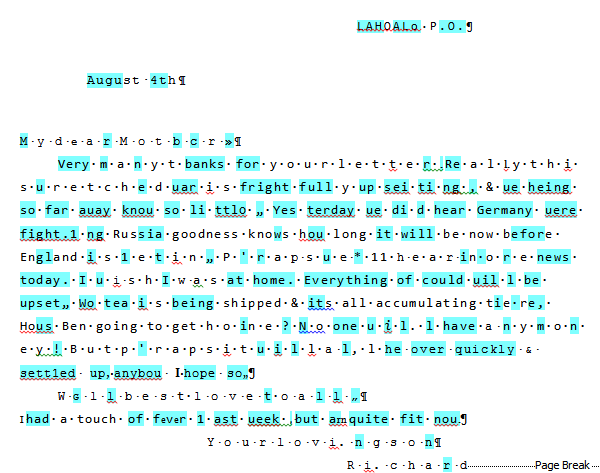 Fiddling around with the settings has produced this; a change in quality so dramatic that it makes the project doable. 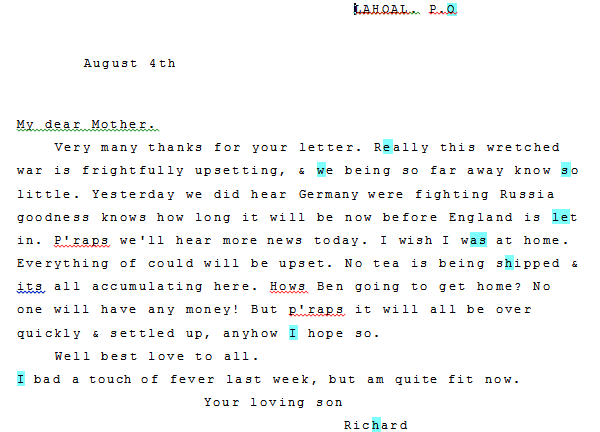 There is still plenty of proof-reading for Chris to do in order for the text to be postable here.  But the project is exciting again, rather than a heart-sink.

Posted by Family Letters on 1 September, '13 in About