Letter to the Trustees of the Imperial War Museum 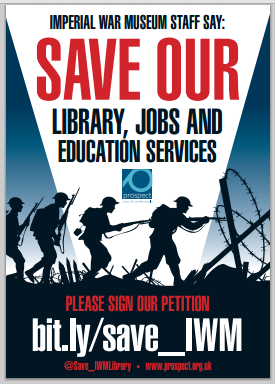 The Trustees of the Imperial War Museum have decided to close the Library and make 60-80 highly specialised staff redundant at an annual saving of £4m or so.

George Osborne has provided money for the Education Services, but how much integrity and truth can those have, without the research Library to back them up?

There is a petitition to save the Library at bit.ly/save_IWM – please consider signing it. Follow @Save_IWM for updates and retweet to spread the word. There are posters, leaflets and a list of people to write to here.  Please consider writing to the Trustees, either individually on masse to

This is the letter I’ve posted to the individual Trustees c/o the IWM London (19 letters, one each) and to George Osborne as Chancellor of the Exchequer and Rt Hon Sajid Javid MP as Secretary of State for Culture, Media & Sport c/o the House of Commons.

Please reverse the decision to close the Imperial War Museum library and make the specialist staff redundant. The sums of money involved are not large, especially compared with the huge sums of money spent on short term commemorations of the First World War. It beggars belief that the IWM Trustees should spend so much on refurbishing the building, and then close its intellectual heart.

Let’s be clear, saving the Educations services is not enough. In fact, without the library it may even be an empty gesture.

There are many reasons why this is a bad idea and even morally wrong, here are just a few.

First, a personal reason. My mother donated 650 letters to the archives written by my grandfather and his brothers during and after WW1. The archives are “safe” but how can I believe you when you say that? I am considering options for finding other more appropriate places for them to be stored. I cannot be the only donor who feels that their trust is betrayed by the Trustees of the IWM. I cannot begin to think how those who donated regimental records of and other irreplaceable books now feel. Closing the IWM Library sends out a very bad signal to those who donated to the IWM Library, and to those who donated to the National Archives, the British Library, the National War Museum, and all other organisations who hold materials in trust.

The library is not just A library, it is unique in the world and serves a specific purpose. That purpose is to help us all understand the causes, course and consequences the single event that has had the most impact on the world in the 20th and 21st centuries: for example, we would not be sending troops to Iraq now if the treaty lines at the end of the First World War had been drawn differently. Closing the IWM Library makes it harder for journalists, think tanks, researchers and maybe even politicians to understand and explain critical and deadly events playing out in the present.

It’s a resource for everyone: what’s in the library ends up on our TV screens, in films and on the radio via the research done by documentary- and film-makers, authors and playwrights. It’s also a resource for academics and historians, who still have not arrived at a shared understanding of why the war started or why it ended. Closing the IWM Library will affect everyone, not just a dusty few.

A library is only as good as its librarians, who have spent a lifetime understanding what the material is and how it connects together. The books and other materials have been donated in good faith; to disperse the library is a betrayal of that trust, and once dispersed the library cannot be re-gathered. The materials have not been digitised; they cannot be found online. Closing the IWM Library is to smash a unique human and physical resource which cannot be recreated.

The library is not just a British resource – in a very real sense it’s not ours to close. One in six of the men who served Britain in WW1 was not British but a member of what are now foreign countries. Australia is loud in commemorating the Anzacs, but the heirs of the 1.5m men from pre-partition India who served in the WW1 and the 2.5m who served in WW2 are more ambivalent about their heritage. We owe our victories in no small part to them, and the IWM records their stories – there is no Indian Wilfred Owen, no Indian Siegfried Sassoon, the regimental histories in the IWM library are important records; in some cases it is the only place that those records are held in an accessible form. Closing the IWM library not only betrays those men and our moral debt, it re-writes history. A cynic may ask whether that is the intention.

In this centenary year, tens of millions of pounds, possibly more, have been spent commemorating the men who died, much of it on artworks that say more about us than about the men they commemorate. Politicians have missed no chance to be photographed standing in the cold and looking solemn. It beggars belief that something that actually does commemorate the First World War, and help us understand it and explain it, should be closed. Closing the IWM library reveals a sentimental hypocrisy at the heart of many of the centenary commemorations.

Finally, let me share with you some of the reasons given by others why the IWM Library should not be closed. These came from the petition in the few hours before I wrote this letter and are typical of the 15,000 or so reasons people in the UK and abroad are challenging this decision.

CO LONDON, UNITED KINGDOM less than a minute ago
I’m signing because I use this library. It is a valuable resource for scholars and the public alike

RG ORPINGTON, UNITED KINGDOM 6 minutes ago
An invaluable, and accessible educational asset. Worth more than one banker’s bonus!

DR FROME, UNITED KINGDOM about 1 hour ago
2014 is the centenary of the Great War, given all the millions spent THIS year on politicians attending various commemorative events it seems cheap to cut funding for what must be our permanent reminder of the sacrifices in WW1 (and other conflicts)

SW WARWICK, UNITED KINGDOM about 1 hour ago
The library is not an optional extra – it’s the intellectual heart of any cultural institution. … if you want to be a relevant, world class educational resource that can support exhibitions, publishing and scholarship at every level then you need a library and qualified staff to run it.

JW PORTLAND, UNITED KINGDOM about 3 hours ago
It seems particularly poignant to be trying to save the IWM just after the recent wave of public support to remember WW1. I’m a former MoD scientist with a deep understanding of conflict and its causes. I visited IWM two years ago in a different role as Chair of Governors of my local secondary school, and was deeply impressed by, for example, the holocaust exhibition. The IWM is an invaluable resource and it chronicles a key aspect of the century that transformed life in Britain. We cannot afford to lose any part of it.

DHA, SC about 3 hours ago
I’m an English professor, and I’ve made use of the IWM in the past.

MJ GIOLOU, PAFOS, CYPRUS about 4 hours ago
I believe the resources of the IWM are an internationally important archive which should be preserved for future generations and should remain fully accessible to the public.

JK TAUNTON, UNITED KINGDOM about 6 hours ago
preservation and maintenance of all historic and heritage property is vital, we must leave for future generations our history, we live in a miserly short term political environment which has no concern for the future.

RT SHEFFIELD, UNITED KINGDOM about 7 hours ago
Every family in Britain was touched by WW1 in which my great grandfather fought and my grandfather and brothers in WW2. Commemoration is an essential part of learning and remembering the lessons of the past. Put money on my taxes do not take money away from the fantastic work the IWM does and the fantastic learning resource it provides and the educational outreach it undertakes.

IR WIRRAL, UNITED KINGDOM about 6 hours ago
Lest we forget

Posted by Family Letters on 13 December, '14 in About, Imperial War Museum