February 1918 – Ted to the Cantuarian

The Cantuarian was the school magazine for Kings College Canterbury, where Ted was at school. They published letters from old boys who were serving in the war.

A line from much-abused Mesopotamia may not be without interest to you, though I have no doubt some of my news will be already in your possession, I mean such items as the names of O.K.S. (Old Kings Scholars) serving in the M.E.F. (Mesopotamia Expeditionary Force).

I suppose the capture of Ramadi last September is still more or less fresh in your memory. Lieut. G. D’O. Maclear (India Army Reserve of Officers) and I were present at that show he being attached to my regiment at that time. He was severely wounded during the fighting, in the left shoulder and neck but has rejoined us now after being in Hospital about 2 months. It was a good day for my regiment, for we captured 3 Turkish field guns and over 2,000 prisoners out of the total bag at Ramadi, quite a good share of the spoils!

Two days ago there occurred what must be one of the shortest O.K.S meetings on record. We were marching down the road and met a battalion marching the other way. Who should accost me suddenly from the ranks but Captain G. C. Strahan and as Maclear was marching with my company, we had a meeting — the three of us — lasting exactly 15 seconds, just while our respective companies were passing each other, and then of course we had to break up our meeting and rejoin our commands.

On arrival in camp here I met L. N. Green of the Army Chaplains’ department, chaplain to a brigade here. I dined with him last night and we raked up many old names and memories. Major C. W. G. Walker is out on the staff somewhere. I have met him in India several times, but have not come across him out here. I also met Smyth (C.J?) at Basra last March, and he was collecting O.K.S. news and has probably already given you much of what I have told you. He is in the Indian Army Reserve and is with the — Gurkhas and was doing duty at the base depot when I met him. He was always a regular contributor to the Cantuarian from Bhuj Bhuj in India. Green told me last night that one Channing Pearce is also up this way, adjutant of a battalion of the –, but I have not met him myself. There are probably other O.K.S. out here but Smith has, I expect, told you of them. F. R. Hawkes is out here I know on railway construction work. E. C. Green I heard from in India about a year agom he had a staff job in Naini Tal, and had been sometime in Aden before that. He is in a battalion of the –, but I don’t know which.

That’s about all the latest information I can supply. I occasionally see names I know in the casualty lists, and also references to and portraits of O.K.S. in the Sportsman’s roll of honour, in the Sporting and Dramatic news — otherwise I am rather ignorant as to what has become of many old friends. I wonder if anything in the shape of a School Roll of Honour is available or contemplated, if so I should very much like to see it.

A few general remarks may be of some service to you, though you probably have most of the information already,.

Major W. H. Wardell was missing in November 1914 at Festubert, and there seems no doubt he was killed. He was in my regiment. At one time there were three of us in it, Major Wardell, R F. Nation and myself. Nation transferred to the Royal Fusiliers in 1913 and was badly wounded at Ypres in 1915 and has not as far as I know been passed fit again.

My younger brother C. G. P Berryman [Topher] enlisted in 1914 in the — Middlesex and went out in 1915 and has now got his commission, I hear. He served for a long time as a groom to another brother of mine who was Medical Officer to an Indian Cavalry Regiment in France. A. P. Methuen was in the — Middlesex too, I believe, at one time. C. H. C. Gore is also in my regiment and servied with us in France and Egypt an is now on the N. W. frontier in India with his battalion.

That I think exhausts my information, somewhat meagre I’m afraid, but there may be one or two points worth recording in the Cantuarian, a publication which I have not seen for years.

I hope the old school is going strong and still beating Dover regularly though I hear they have moved from Dover during the war. Best salaams from all O.K.S out here to you all and especially to Mr. Latter who probably remembers all the names I have mentioned.

Best of luck to you all and when there are re-unions and O.K.S. meeting “after the war” — that vague and problematical period — may I be there to see.

I am grateful to Peter Henderson, archivist at Kings School Canterbury, for this letter. 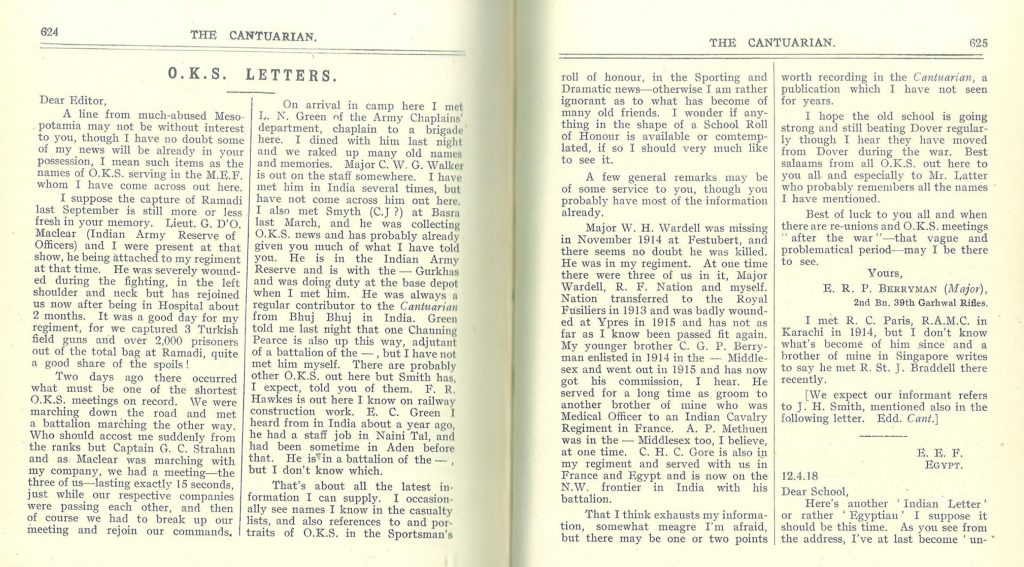 Posted by Ted Berryman on 18 February, '18 in About