About this Project: Remind me again why I thought it was a good idea

I’m feeling daunted by the scale of the task. I’m also enjoying finding out who my grandfather and his siblings were, by reading their letters, and I am planning trips to raid the family photo albums.

I think I mentioned that there are 1000 pages of typescript; that’s two reams of paper.  I’ve managed to “teach” the OCR software better character recognition, but it still confuses hs and bs so every letter must be corrected by hand. And I rather foolishly decided to tag each letter with the names of people and places mentioned in it; this is already very fiddly.

I think it takes about 20 minutes to do each letter on average. I don’t know how many there are altogether, but I estimate 700. I’ve listed the 1914 letters on a spreadsheet (a task and a half in itself) and from July to December 1914 there are 82 of them. If my estimate’s right, and there are 700 or so, then just posting them is about 233 hours’ work.  On the other hand, if I can manage three letters every day, I can get them all loaded this year and ready to go.  I hope. 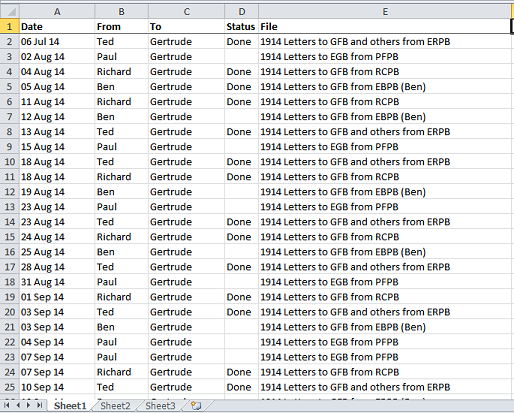 I’ve made a spreadsheet

I am enjoying it though; you can hear each of their voices coming through the letter. Ted’s letters show how much he misses the rest of the family, Richard’s are full of replies to letters from their mother (she pickled 400 walnuts in the summer of 1914, he mentions them in at least three of his letters to her), and Benedicta’s are one long stream of gossippy consciousness. They all mention a visit their mother made to her family home in the late summer, and interestingly they all mention how she is likely to leave the property in her will.

It’s good to see the letters building up in the admin pages of the website: 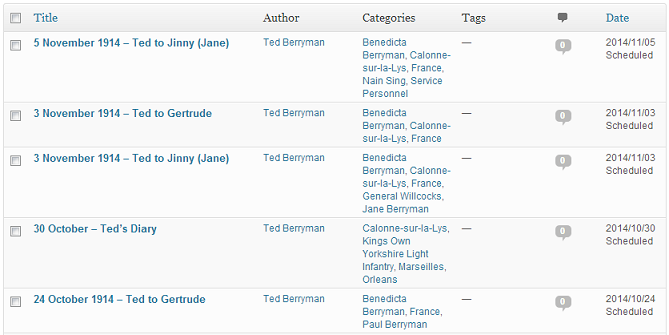 Here’s some I posted earlier

I am going to get in touch with my sister and the remaining relatives of my mother’s generation, and ask if I can raid their boxes and photograph albums. It would be good to get more pictures up on the site. The trip should be fun, and I’ll enjoy working on the project but not sitting at a laptop.

Posted by Family Letters on 31 December, '12 in About, WWI