A lovely mail arrived yesterday with 3 letters from you, dated 5th 13th & 20th March, all very welcome, and very many thanks indeed for them- of course the prevailing topic was old Ben’s wedding, & in your last letter you just mentioned it had gone off all right, and I am longing to get next mail’s letters with fuller descriptions. Your letter too is the only one that mentions Nell, you say she is “very pretty” – I’m sure of that, the dear child – but thin – Well, as far as I can make out everyone at home is thin nowadays, & Nell says she is very fit & well. All the same I am longing for letters from you all next mail, as they all promised to write & tell me all about old Nell, and of course I’m  wildly delighted to hear. I had a wee note from her at Delaford, very hurriedly written, but she seemed very full of life-

My chief news is of course about having met Jim. He was living in camp the other side of the river, and as there is only one bridge, supplemented by a spasmodic ferry, it was rather hard for him to get across. And I was awfully busy too with the class, and had’nt much leisure, so our meetings were necessarily curtailed. However we saw a good deal of each other, and had great talks over old times, & he told me a good deal of stop press news, tho’ I was able to put him wise on a good many points, as he had been without a mail for a long time. He is most awfully fit and well, & it was ripping seeing him again.

He has gone off now to meet his regiment. We had several dinners together at the club here and he may try and wangle it to be sent on this course later on, in which case I should have to lecture to him!

Your latest letters were posted just before the big offensive, and of course contained no reference to it. A lot has happened since then, has’nt it, and I’m afraid the British public has been called upon to show more grit & determination during these last few weeks than at any other period of the war- But at the time of writing the papers & all telegrams strike a much more hopeful note, with much more confidence and a brighter outlook all round.

We simply must put implicit confidence in those wonderful troops, it’s the one & only thing to do, & indeed they have not failed us so far- It must be terribly hard for all you at home, but I do hope by now confidence is restored – if it ever failed, which I rather doubt. I like to think the Britisher is capable of putting up with far worse than this, he is capable of making greater sacrifices yet and willingly too. His heart is in the right place, if only the government will tell him what to do, he’ll do it.

He hates, I always think, to be asked to do things voluntarily, he seems shy at starting,- but frame a line of action for him, ration him, tax him, cut up his daily life into little bits for him, & he will submit loyally so long as it means victory. I’m sure of it – and behind it all is the wonderful patience & courage & sacrifice of the women, to say nothing of the hard manual labour they do- No, there’s not much wrong wth the rank & file of England. He will submit to good management as willingly as he does to bad, and now that is just a question of “sticking it”.

I feel sure in my own mind who can go on longest. Hard times I know for us all, especially for all you at home, but we have the example set by the women of England to follow, and thank God we are far from going under yet, a long long way from it.

Really the rationing in England does’nt seem a great success at present. I quite agree with you, it should have been started 2 years ago. Everyone would have played up I’m sure, they only want to be asked, & told what to do, and they will willingly do it. A few might have groused, but only a very few, & they would’nt have mattered. But it seems wrong that the food should contain so little nourishment, & I do hope that things will improve when the machine works a little more smoothly. The conditions in Germany & Austria, especially the latter, must be terrible if ours are as bad as you say.

Lovely & cool here, & here we are the 8th of May! And this time last year at Basra it was well over 100! We have had fearful gales & storms too, and altogether the weather is quite unusual, & long may it continue so- you sent me one or two cuttings about Hit and the fighting up there. Yes we were in that, but there was’nt much doing,  except our pursuit of the Turk, which was most exciting. But I wrote & told you we had been up there, did’nt I.

So glad the photographs arrived – what exciting adventures my last lot of letters seem to have had! Both Ben & Nell say they were stamped “damaged by sea water”, so I expect they could a tale unfold. However it’s a comfort to think they did roll up eventually. I think the mails are marvellous; irregular of course, but at least they arrive nearly always; I have the greatest admiration for the mail service.

I had a long letter from Paul describing the wedding an’ all- and of course I got your letters too all about it. He seems deliriously happy, & his letter was most enthusiastic. I am being left are’nt I! Three members of the family engaged and married since I set the fashion – in engagement anyhow, tho’ Ben was engaged then of course- and I expect & hope Jinny will not wait long. Poor old Nell, I am so sorry for her, & she’s so awfully plucky & patient about it all. But what can one do? There seems no chance of leave except on very urgent affairs, & they don’t count marriage urgent enough- However we must just wait & hope for the best; things happen so unexpectedly & suddenly nowadays that one never knows where one may be next.

I am so glad my cable to Ben hit off the exact day. I must confess it was’nt meant to, but it was rather hard to send off private wires just then, as we were right up at the front – during the Hit business it was – however I managed to persuade the field telegraphs to take it, & I’m extra pleased if Ben was so anxious to hear from me. I had letters from her this week, but I doubt if I can answer them today.

Yes that Mrs Lumb at Horsely is Fred Lumb’s sister, she married a cousin of the same name. I know her slightly, do go & see her if you can, or write to her as Fred Lumb & I are great pals, & it would be a good thing I think. Fred Lumb’s mother always sends me a Christmas card; you remember I went & stayed with them when I was on leave in 1910, up in Norfolk, perchance-

So glad to hear Capon is so much better & can do a little work now. You seem to have discovered a wonderful doctor in London for him- How sad about Dr Lerick, I did’nt know him to speak to, only by sight. You talk of taking his house, and I suppose with all the family getting married you would be more comfortable in a smaller house, but when the family comes to stay it will be rather a problem-

Well, the old home is beginning to break up- sad but inevitable I suppose- But we have no complaints – we have been together a tremendous lot despite our scattered professions. And we could’nt have had a finer training ground than we have had, or a finer example than you, mother, and we all owe you a very deep debt of gratitude for all you have done, and I only hope our own homes will be as happy and comfortable and well-managed as the one we have known so long has always been-

So Aunt Edward’s left you £1000; how generous of her, a handy sum these days; I wonder if it was in war loan or stock of any sort. You say I have got a watch, quite exciting, & I am daily expecting a very stiff & formal letter from the solicitors. Yes, you had better stick to the watch pro-tem-

My news is little enough I’m afraid. I have been in bed these last 3 days. It appears (Capon!) that I had a “sharp attack” of sand-fly fever, but I did’nt worry much about it. Anyhow about a week ago I began to get something really saucy in the headache line, & on on Sat: & Sun: it felt as if someone was making a tank inside my head, & I thought it was going to burst. Jim was here, & was awfully good to me, & got doctors & medicine etc; I’m afraid he was rather worried but of course I’m perfectly all right really; Sand-fly fever always leaves you with heads like that, & they are getting less every day now & will probably be quite gone by tomorrow. But they won’t let me do any brain work or lecturing for a day or two. However, don’t worry, I’m as right as rain really, & it will be a thing of the past when you get this. The work here is strenuous, so I have to go easy for a day or so. Mail goes today.

A long chatty letter, full of family gossip and morale-boosting encouragement, and then Ted finishes up with the news he’s got Sand-Fly Fever and is too ill to work. Love him to pieces, but really, he is upper lip is a bit too stiff at times. 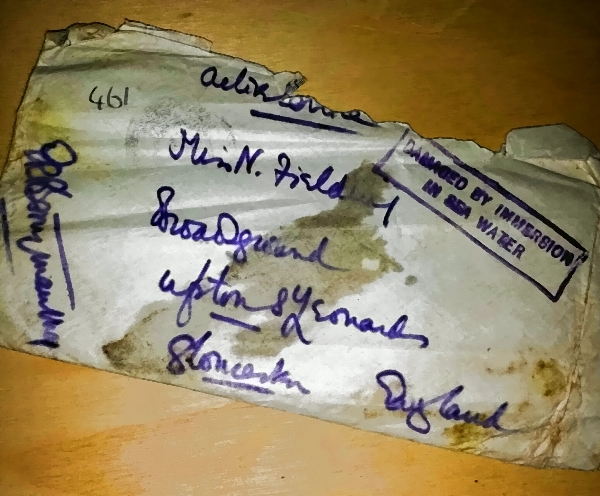