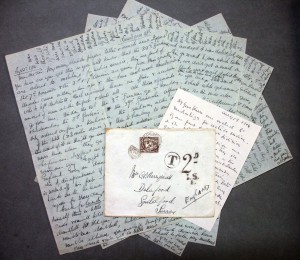 Benedicta’s first letter of the war

Dear Mother, Very many thanks for your long letter, I must get my mail all off today so as to make more or less sure of catching the train down below. The dress you have got for me sounds ripping thank you ever so much, I shall hear if you’ve sent the box to Calcutta or here but it doesn’t matter much. I can get King Hamilton to send it along if I should still be here as it seems I am for life, the dreadful war has & will upset most things I expect, one can’t make any sort of arrangements, and all leave from here is stopped unless within 48 hrs recall, so at present Ted will not get his for Shillong, but I expect I shall go at the end of Sept now & meet Dick & then go on to him till he is houseless, & if I can’t get home in November I shall go to the Nobles, they will always have me. We hear very little up here of course in a way of what is going on, but it seems pretty dreadfull & at home you must all be in a fuss. I don’t suppose any officer will go from here but there is a chance of course, & they are all of course dieing to be off & everlastingly grumble at being so poked away, it’s all very cheery for us poor females but at the most they’ll be ordered to stations down below to take places of other officers gone, Alix & I can see ourselves stranded but I shall go to Assam, I feel more at home there and & it won’t be too hot by the time anything does happen.

Thank you ever so much for the ninon coat, I’m sure to love it. Jane and Eric don’t seem to have been over successful at Broadwater, but they had fun I expect. Ripping wizzing over in the little car; Jane will be one up on me in driving by the time I get back, as I have forgotten all about it I’m sure. A good idea going to Holmwood I’d love to see it again, the girls won’t remember much at least of course Dreda ought, & I can hear Jane making wild shots & pretending she does! I suppose you did alter that part in our will (nice subject?) didnt you, but you certainly ought to make some sort of compensation for us girls & go on Grandmother’s scheme of the female being provided for! Glad Fay & Mamie have been down- You do seem to have been doing a lot with jam & pickle walnuts & I hope you do the cherries, I rather like brandy cherries. I don’t hear from Burdice, she owes me two letters too, yes Diana seems not on the robust side which is a pity, she’s such a well looking child at least she was, I wonder if Aunt Mary will send her to Margate again. I wish Aunt Nellie could have got the Rowans, it would be nice to have someone we knew there. I am surprised about the Masons, awfully sad for the family, I always thought Mrs Mason looked so sad, as you say they’ll probably be smarter than ever.

I’m glad my room is to be papered, I should like it a plain white if I can, but it will have been started on or rather finished by the time you get this & it doesn’t matter a bit really. I expect it’s the same as Dreda’s as there was some over wasn’t there, I suppose you’d better leave the pictures for me, but I feel I shall never have a moment once I get back! & may I please have the gass taken away & electric light put. I feel I used much more gass as I never turned it down hardly.

Ted is very well but has lectures etc today but I daresay he will write tomorrow, he’s very distressed he can’t be in this war & swears all day, well so does everyone at not being on the spot. What about Paul, I suppose he’ll get in for some of it. tho’ I suppose the Home & Channel Fleets will get most of anything there happens to be. The rains here never cease, I didn’t think it could be as bad as it is, really it’s awfully depressing it gets on your nerves after a bit & we’ve now had it for nearly 3 weeks, we just had two more or less fine days & that’s all, & more rain during July alone, than there is in England in a year. Nothing going on, I don’t see anyone but Alix & even we can’t get to each other some days tho’ we are so near, it means changing both times as no umbrella or coat keeps this rain out, & after a lesson or two one fights shy of chills. I have a fire going, you have to watch your things so carefully, all my shoes go mouldy in one day, I find my brand new soft leather today a mass of mildew!

I am sending off today the little book I got for you, some of the stories are rather nice I think & so quaintly written, its for your birthday & many happy returns of tomorrow Aug 6th your wedding day, I expect the girls won’t forget some flowers, Dreda generally remembers, the excitement of Selsey may have put it out of their head. I do hope you have a nice time. Everything has gone up in price I suppose, one doesn’t in any way realize how dreadfull a war can be, wish we heard more, we get only summaries in the Pioneer & they are never satisfactory somehow.

All leave has been stopped out of this country, I do pity the poor officers who were just sailing for home. We have some kids coming to tea this afternoon so I must make some cakes but I don’t suppose they’ll be able to turn up. Two babies born here last week, oh I told you this before, Mrs Stack is rather a friend of Ted’s & she writes yesterday to say she is going into the drawing & is ready to receive visitors, also Mrs Archie Grey in a rapid recovery!

I would love to be with you at Selsey, I cant say life is very enjoyable up here at present I shan’t be sorry for a change, & I shall be too disappointed if I can’t get home this year as it will also mean I sort of stay about as both Ted & Dick will be houseless! Something of course will turn up & I’ve plenty of friends to go to but I’d set my heart on November, but one can’t tell how bad things will be as yet. Well I must end.

Heaps of love your loving daughter

go on addressing here for the present.

(On back of envelope)
I have addressed the book to Delaford it will take longer than this, B.

Benedicta, known as Ben, was staying with Ted in regimental station in India. As we shall see, she was getting over an unhappy romance and had plans to visit Richard in Assam, but when war broke out she decided to come straight home.

She seems incapable of using fullstops let alone paragraphs and her spelling is poor.  This has been split into paragraphs to make it easier to read, but some of her spelling has not been altered.

Holmwood, near Hartley Witney, was their mother Gertrude’s old family home. It had been let since her mother died, but several of the children had been born there, and it was not far from Laverstoke, where their father had been rector before going to Camberley.