I’ve got ever so many letters from you all of a sudden: the big 3 weeks mail arrived on the 17th, & yesterday another mail turned up with letters up to 15 Jan, so they are only taking just over a month to reach us now. By the first one I got 4 letters from you dated 17th & 28th Dec & 1st & 7th Jan; & yesterday I got one from you of 15th Jan- splendid is’nt it. Very many thanks for this fine batch of letters which I will more or less try & deal with now.

I’ve got heaps of papers too, so have lots to read now- I also had letters from Dreda (2) & Jane, & heaps from Nell, tho’ they have’nt all arrived yet, there are still 2 or 3 to come; & I heard from ‘Old Drew’ (I wrote to him some time ago) & a Christmas card from Paul & Nance. What splendid news about the expected infant; I’m most awfully pleased, & I’m sure it’s quite time you were a grandmother-

I am still in hospital. Last Monday & Tuesday, as usual, for the 5th time running, I went under, but strange to say I had no fever this time, only all the accompanying symptoms, aches & pains & generally feeling rotten all over. So I was’nt much good for diagnosis, they tested my blood & examined it under a microscope, but could find no trace of malaria or anything. So they have diagnosed it at present as ‘relapsing fever’ whatever that may be, & they kept me in bed.

Yesterday I got up & dressed & went for a drive & today I have been out in a launch. As usual I feel quite fit now & very cheery, though rather limp. They say I am run down & anaemic, so are giving me tonics & feeding me up on all sorts of good things. I must say I just loved lying in bed doing nothing, & just loafing, which I suppose shows I want a day or two off, as generally lying in bed is so very boring.

I have several visitors, including Genl Stewart (he is in the rgt: & I know him well of course) he is chief of the staff out here now, & he took me out yesterday in his car & today in his launch. Then Fred Lumb flew down from Mosul to Tekrit in a ‘plane to see me, and finding I had come on here, he came on as well. Was’nt it ripping of him; & this morning he flew back to Mosul, about 200 miles: awful fun for him- I think they will keep me here over next Monday & Tuesday, then if nothing happens they will get rid of me as an encumbrance-

We had very cold weather up to two days ago, & now it’s lovely again, nice sunny days and cold nights- It’s lovely sitting in the sun in the verandah, almost too hot sometimes. Was’nt it splendid Nell & her sisters sweeping the board at the fancy dress dance! & the judges not knowing they were giving the prizes to 3 sisters! I bet old Nell looked ripping in her kit- I’m glad you liked the photograph she sent you. Is it the one of her & Sandy? I think that’s the sweetest picture. But you say something about her hair being done differently, back off her forehead, so I’m thinking it must be the other one of her, not so good but still very very nice. I hope to hear of her going to or being at or having been to Delaford in a mail or two; she said you had asked her & she had promised to go- 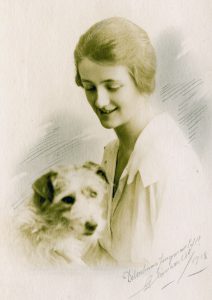 The photograph of “Nell and Sandy”? – it’s certainly Nell

Many thanks for the cuttings about flying. Truly there are undreamt of possibilities in front of us, & I think we must expect rapid developments as soon as the world settles down a bit & big commercial firms can give their attention to flying. I expect before the end of the year they will be carrying some of the mails at anyrate, to India & elsewhere. I wish I could manage to fly home. Stewart tells me he is going to!

As far as I know Jim was going to Salonika when he stopped with me on the way down to Basra. He seemed to think it was a graceful way of withdrawing from the 1/9th, where he had come in senior to several people who had been in the regiment since it was raised. Besides I think he thought it was nearer home. I had a line from him in Cairo, on 1st Jan, but by now I expect he’s reached his destination. I should think he would be able to get some leave alright from there, probably long before I do!

No I never found my kitbag, so all my lovely British warms & Burberrys & boots etc have gone west. I must have lost £15 – £20 worth of stuff at present rates. I suppose I could get some compensation from Government, but I’ve no doubt they would say it was my own fault & not due to any ‘exigencies of the Service’ & not lost on active operations, so my claims would be dismissed. So I’ve left the whole thing alone. You see I lost it on the way up to Tekrit when I was joining the 34th Bde: I had too much to go in the car, so I gave this bag & some more kit (which rolled up) to a pal in a rgt: which was shortly coming to Tekrit, & they lost it in their move, & that’s why I don’t think Government would compensate me. The colonel offered to, but of course I could’nt accept any from them, as I asked them as a favour merely- Anyhow it’s lost, & there it is, a nuisance but it can’t be helped-

What a krewst all this is about various letters going wrong. But it seems only a few have, as I always get Nell’s sooner or later, & I don’t think any of yours have gone astray. I hear you wrote to the I.O. about it, & it seems best to put in “Indian Inf Bde”, & I should always put “Mesopotamia” in full I think-

You seem to have had some nice Christmas presents, & Nell tells me she had some lovely ones too;  how ripping of you all to send her things. Ben seems to have sent her the bag of the season, & Nell is delighted: I’m sure I should never have thought of such a lovely present for her. So you’ve kept all our ‘war letters’: I suppose they will be interesting someday, in fact I’d very much like to see some of mine written in the early days of France, for I can’t remember a single thing, except that it was rather unpleasant at times, & that the Boche seemed to have about a hundred guns to each one of ours-

I’m so glad my letters about the show reached you safely. I’ve nearly forgotten all about that too! So I’m glad I recorded my impressions fairly soon after the event. I hardly dared hope they would ever get home, as I posted them in such weird places. I had no writing paper, none of us had. You see we had to abandon most of our kit & go on just a few odds and ends carried on a mule, as the roads (?) were impassable for wheeled traffic. And I had such heaps of maps & papers to carry that I had no room even for a tiny writing pad, so had to use official stuff. Yes, rather Jim was under fire all right and had a most strenuous time, very long marches & very little grub it seems. So sorry you’ve had to have so many teeth out, & I do hope you’re none the worse, & your new teeth are all right-

How ripping Paul being made a Lieut Commander. I’m sure he ought to have got it long ago as he’s been right through the war & in some good shows, Jutland an’ all. I would cable to him only they have sent round so many notices about delays in cables & asking people not to send unnecessary ones that one does’nt like to send too many. However I’ll write to him of course.

Jim told me he was writing to you about the D.S.O. (Was that what your cable of congratulations was about?) Surely you did’nt expect me to write & tell Jim; hardly my job I think! However, I’m so awfully glad for your sake & Nell’s sake, you seem so frightfully pleased all of you, so that bucks me up a lot, but I feel I don’t deserve it in the least, & my general must have lied very hard indeed when sending my name in! Genl Cobbe pinned a bit of ribbon on to me at that big parade I told you about.

Edmund Candler himself sent me a copy of his Spectator article: I was the “young officer” who took him over the battlefield and shewed him what happened.

Yes those little pictures of Mesopotamia are’nt bad are they. I sent some to Nell & Ben, but I’ve not heard whether they got ’em or not. So many things get lost in the post nowadays- You say you went over to Camberley a day or two before writing one letter. Is that old Mrs Hicks (Vera’s grandmother) who died the other day? I’m glad Miss Maude got my letter. Old Yeatman dead : how sad, very sudden was’nt it? We have meals at such odd times here, they chuck you out of bed at 6:30; breakfast 8 or so, lunch 12.30, tea 3.30, dinner 6.30. I’m having a tonic, iron & arsenic, & lots of good things to eat, so I’ll be out and about again in no time.

Fred Lumb has just been given a D.S.O for these last operations. I heard today. Write to his Mother do, & tell Ben. She will be awfully pleased

Posted by Ted Berryman on 21 February, '19 in About