Dear Mother. V. many thanks for your letter – I thought Jim told me his Aldershot stunt was off – I suppose it’s a sort of moving off place – so nice to have him near though.

I hear Ivan has 10 days leave – however does he manage it – lovely for he & Ben; such a rush last time you remember.

We’ve been having gorgeous weather up here lately – really hot during the day – so I have been ashore once or twice & played golf – on some links made by the Fleet – quite good ones really.

We had our regatta last week – two days of it – we won one of the officers races – most huge cheering – I entirely lost my voice for the two days after – because I shouted so – I’m alright again now though.

Sorry to hear about Colin Maud. I do hope he is allright- Tell him I asked after him & give him a Wouff Wouff-

I’m supposed to be dining with Tommy Drew & another Glo’ster tonight – but I don’t think I can get away. The Garden sounds lovely. I should much like some flowers when they come out.

My best love to you all

Here is Ben’s fiancé Ivan (with pipe) in a photograph taken in 1915. 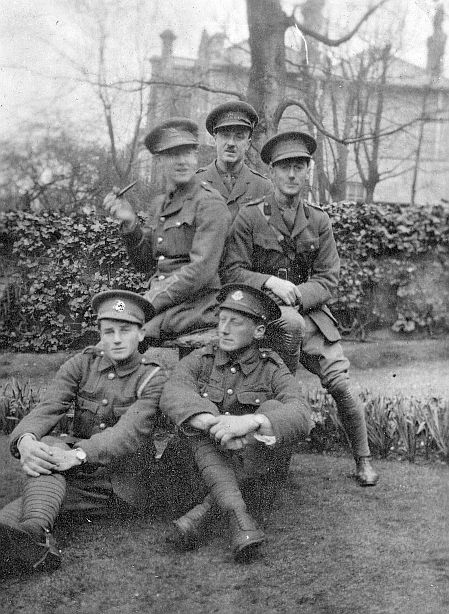 Posted by Paul Berryman on 17 May, '16 in HMS Malaya, Ivan Bennett, Rosyth, Wiggs