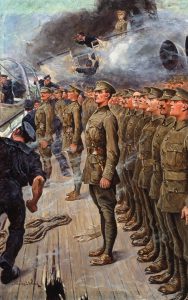 The evacuation of the troopship SS ‘Tyndareus’.
Stanley Llewellyn Wood.

Jim Berryman was sailing with the Middlesex Regiment to Hong Kong on the SS Tyndareus.

One of the most glorious episodes of the war, away from the actual fighting fronts, has just been revealed by the publication through Reuter’s Agency of the following telegram, which passed between the Naval Commander-in-Chief, Simon’s Town and the Admiralty, on the occasion of the accident to the transport Tyndareus, off Cape Agulhas last Tuesday evening, when the Battalion of the Middlesex Regiment displayed heroism equal to that of the men on the Birkenhead in the same spot, sixty-five years ago.

The message referred to were as follows:-

From the Naval Commander-in-Chief, Simon’s Town, to the Admiralty:-

“The behaviour of the Battalion of the Middlesex Regiment, on board the steamship Tyndareus after the accident to that ship, there being a large quantity of water on board, and the ship apparently sinking by the head in a heavy swell, was most praiseworthy, and equal to the Birkenhead tradition of the British Army in the same spot. It was only due to this that no lives were lost in the boats. The ship was saved by the coolness and perserverance of the Captain, Officers, Engineers and Engine Room Staff.”

The following message has been received from His Majesty the King:-

“Please express to the Officers Commanding the Middlesex Regiment, my admiration of the conduct displayed by all ranks on the occasion of the accident to the Tyndareus. In their discipline and courage, they worthily upheld the splendid tradition of the Birkenhead, ever cherished in the annals of the British Army.”