Thank you for following the Berryman brothers for the four long years of the war.

To us, with hindsight, it seems strange that we don’t have a letter dated the 11th November 1918. It was Nell’s 21st birthday and she heard the news while doing the washing up, presumably for the Red Cross, since 11:00am is a strange time to wash up at home. But they were busy men, and it was only one day.

We won’t leave the Berrymans quite yet. 11th November 1918 was a truce and peace wasn’t confirmed until the Treaty of Versailles was agreed in June 1919 so we can follow the brothers’ letters for a few months more and find out a bit about what happens next.

But for now, let us pause and think of the grief of the four years of the war and the decades that followed. Diana Cooper said the longed-for peace came with the shocking realisation that everything wasn’t “all right” because the dead would always be dead, and Harry Smith said that ten year later people “wore their grief like jagged glass”. (@Harryslaststand)

The picture below and the audio which re-creates it illustrate the pivot-point of the 20th century more simply than any artifact I know. 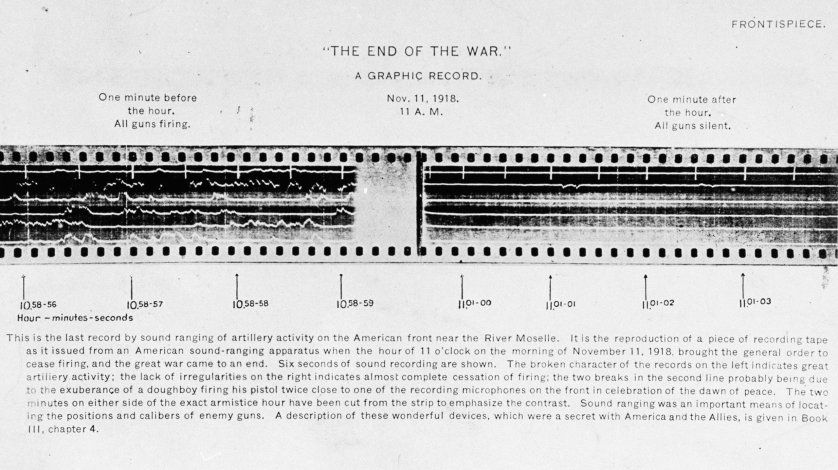 The caption below the image reads: This is the reproduction of a piece of recording tape as it issued from an American sound-ranging apparatus when the hour of 11 o’clock on the morning of November 11, 1918 brought the general order to cease firing, and the great war came to an end. Six seconds of sound recording are shown The broken character of the records on the left indicates great artillery activity: the lack of irregularities on the right indicates almost complete cessation of firing.

The audio was created by Coda to Coda for the Imperial War Museum.

Posted by Family Letters on 11 November, '18 in About